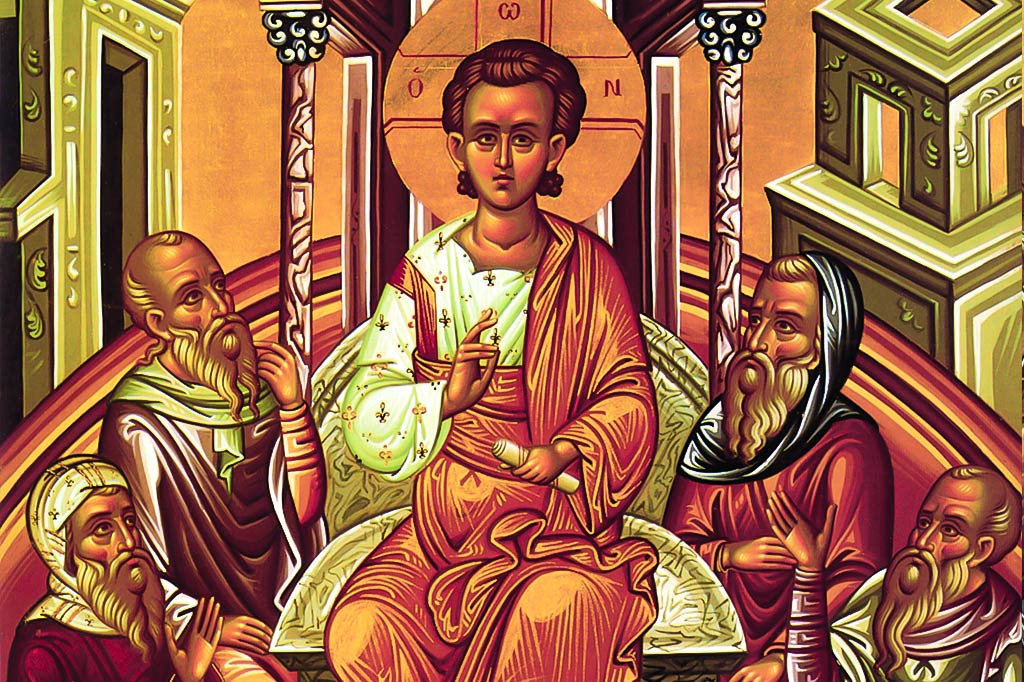 The fourth Wednesday after the Feast of Holy Pascha is commemorated as Mid-Pentecost. This feast marks the halfway point between Pascha and the Feast of Pentecost. As explained below this feast is closely linked to the Sunday of the Paralytic.

After the Saviour had miraculously healed the paralytic, the Jews, especially the Pharisees and Scribes, were moved with envy and persecuted Him, and sought to slay Him, using the excuse that He did not keep the Sabbath, since He worked miracles on that day. Jesus then departed to Galilee. About the middle of the Feast of Tabernacles, He went up again to the Temple and taught. The Jews, marvelling at the wisdom of His words, said, "How knoweth this man letters, having never learned?" But Christ first reproached their unbelief and lawlessness, then proved to them by the Law that they sought to slay Him unjustly, supposedly as a despiser of the Law, since He had healed the paralytic on the Sabbath. Therefore, since the things spoken by Christ in the middle of the Feast of Tabernacles are related to the Sunday of the Paralytic that is just passed, and since we have already reached the midpoint of the fifty days between Pascha and Pentecost, the Church has appointed this present feast as a bond between the two great feasts, thereby uniting, as it were, the two into one, and partaking of the grace of them both. Therefore today's feast is called Mid-Pentecost, and the Gospel Reading, "At Mid-feast"--though it refers to the Feast of Tabernacles--is used. 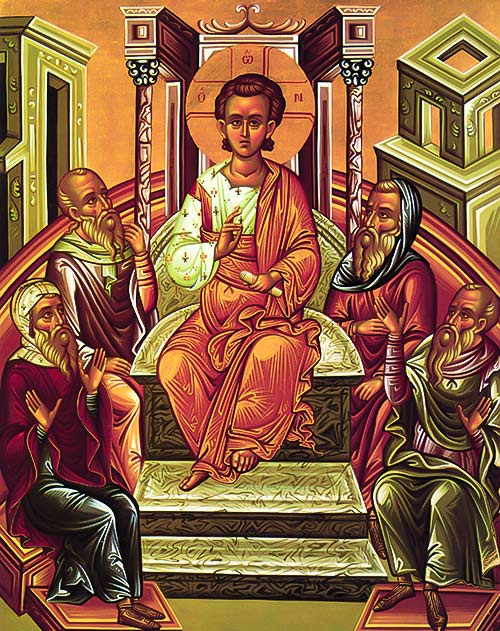 It should be noted that there were three great Jewish feasts: the Passover, Pentecost, and the Feast of Tabernacles. Passover was celebrated on the 15th of Nisan, the first month of the Jewish calendar, which coincides roughly with our March. This feast commemorated that day on which the Hebrews were commanded to eat the lamb in the evening and anoint the doors of their houses with its blood. Then, having escaped bondage and death at the hands of the Egyptians, they passed through the Red Sea to come to the Promised Land. It is also called "the Feast of Unleavened Bread," because they ate unleavened bread for seven days. Pentecost was celebrated fifty days after the Passover, first of all, because the Hebrew tribes had reached Mount Sinai after leaving Egypt, and there received the Law from God; secondly, it was celebrated to commemorate their entry into the Promised Land, where also they ate bread, after having been fed with manna forty years in the desert. Therefore, on this day they offered to God a sacrifice of bread prepared with new wheat. Finally, they also celebrated the Feast of Tabernacles from the 15th to the 22nd of "the seventh month," which corresponds roughly to our September. During this time, they live in booths made of branches in commemoration of the forty years they spent in the desert, living in tabernacles, that is, tents (Ex. 12:10-20; Lev. 23).

Apolytikion (Plagal of the Fourth Tone):

Mid-way in the feast, refresh my thirsty soul with the flowing waters of piety. For You cried out to all, O Savior, "Let him who thirsts come to me and drink." You, O Christ our God, are the Fountain of Life, glory to You.