On Thursday of Holy Week four events are commemorated: the washing of the disciples' feet, the institution of the Sacrament of the Holy Eucharist at the Last Supper, the agony in the garden of Gethsemane, and the betrayal of Christ by Judas.

The Institution of the Eucharist 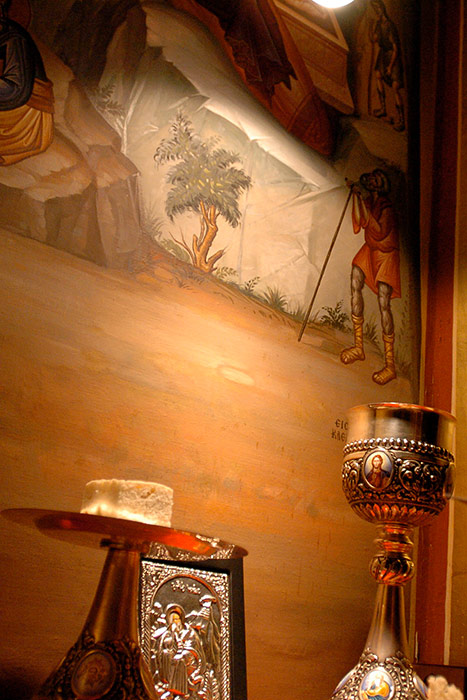 At the Mystical Supper in the Upper Room Jesus gave a radically new meaning to the food and drink of the sacred meal. He identified Himself with the bread and wine: "Take, eat; this is my Body. Drink of it all of you; for this is my Blood of the New Covenant" (Matthew 26:26-28).

We have learned to equate food with life because it sustains our earthly existence. In the Eucharist the distinctively unique human food - bread and wine - becomes our gift of life. Consecrated and sanctified, the bread and wine become the Body and Blood of Christ. This change is not physical but mystical and sacramental. While the qualities of the bread and wine remain, we partake of the true Body and Blood of Christ. In the eucharistic meal God enters into such a communion of life that He feeds humanity with His own being, while still remaining distinct. In the words of St. Maximos the Confessor, Christ, "transmits to us divine life, making Himself eatable." The Author of life shatters the limitations of our createdness. Christ acts so that "we might become sharers of divine nature" (2 Peter 1:4).

The Eucharist is at the center of the Church's life. It is her most profound prayer and principal activity. It is at one and the same time both the source and the summit of her life. In the Eucharist the Church manifests her true nature and is continuously changed from a human community into the Body of Christ, the Temple of the Holy Spirit, and the People of God. The Eucharist is the pre-eminent sacrament. It completes all the others and recapitulates the entire economy of salvation. Our new life in Christ is constantly renewed and increased by the Eucharist. The Eucharist imparts life and the life it gives is the life of God. 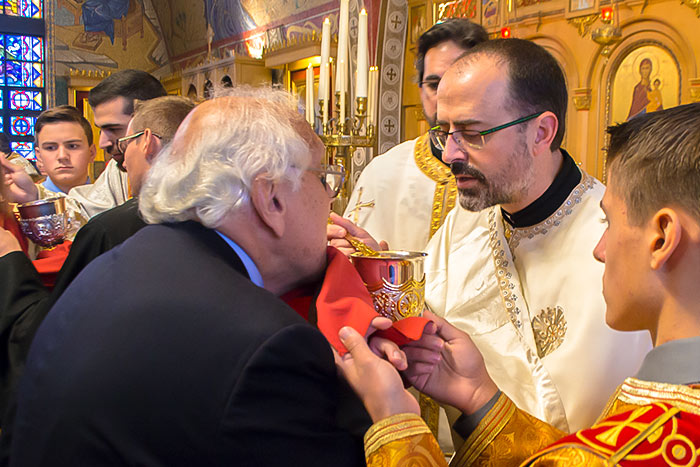 In the Eucharist the Church remembers and enacts sacramentally the redemptive event of the Cross and participates in its saving grace. This does not suggest that the Eucharist attempts to reclaim a past event. The Eucharist does not repeat what cannot be repeated. Christ is not slain anew and repeatedly. Rather the eucharistic food is changed concretely and really into the Body and Blood of the Lamb of God, "Who gave Himself up for the life of the world." Christ, the Theanthropos, continually offers Himself to the faithful through the consecrated Gifts, i.e., His very own risen and deified Body, which for our sake died once and now lives (Hebrewa 10:2; Revelation 1:18). Hence, the faithful come to Church week by week not only to worship God and to hear His word. They come, first of all, to experience over and over the mystery of salvation and to be united intimately to the Passion and Resurrection of the Lord Jesus Christ.

In the Eucharist we receive and partake of the resurrected Christ. We share in His sacrificed, risen and deified Body, "for the forgiveness of sins and life eternal" (Divine Liturgy). In the Eucharist Christ pours into us - as a permanent and constant gift - the Holy Spirit, "Who bears witness with our spirit that we are children of God - and if children - then heirs with Christ (Romans 8:16-17).

The Washing of the Feet

The events initiated by Jesus at the Mystical.Supper were profoundly significant. By teaching and giving the disciples His final instructions and praying for them as well, He revealed again His divine Sonship and authority. By establishing the Eucharist, He enshrines to perfection God's most intimate purposes for our salvation, offering Himself as Communion and life. By washing the feet of His disciples, He summarized the meaning of His ministry, manifested His perfect love and revealed His profound humility. The act of the washing of the feet (John 13:2-17) is closely related to the sacrifice of the Cross. Both reveal aspects of Christ's kenosis. While the Cross constitues the ultimate manifestation of Christ's perfect obedience to His Father (Philippians 2:5-8), the washing of the feet signifies His intense love and the giving of Himself to each person according to that person's ability to receive Him (John 13:6-9). 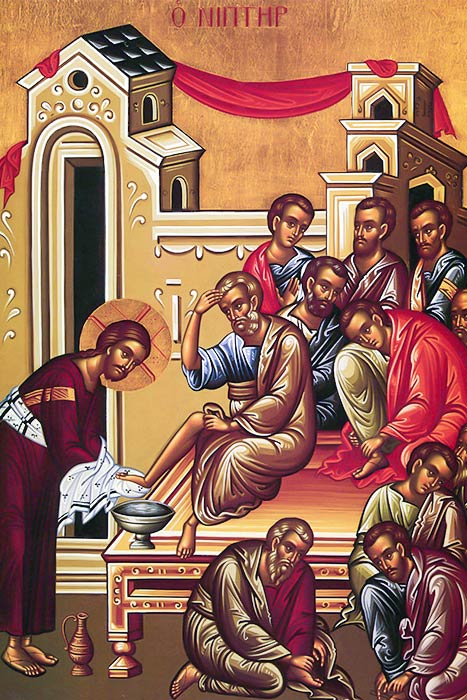 Prayer in the Garden

The Synoptic Gospels have preserved for us another significant episode in the series of events leading to the Passion, namely, the agony and prayer of Jesus in the Garden of Gethsemane (Matthew 26:36-46; Mark 14:32-42; Luke 22:39-46).

Although Jesus was Son of God, He was destined as man to accept fully the human condition, to experience suffering and to learn obedience. Divesting Himself of divine prerogatives, the Son of God assumed the role of a servant. He lived a truly human existence. Though He was Himself sinless, He allied Himself with the whole human race, identified with the human predicament, and experienced the same tests (Philippians 2:6-11; Hebrews 2:9-18).

The moving events in the Garden of Gethsemane dramatically and poignantly disclosed the human nature of Christ. The sacrifice He was to endure for the salvation of the world was imminent. Death, with all its brutal force and fury, stared directly at Him. Its terrible burden and fear - the calamitous results of the ancestral sin - caused Him intense sorrow and pain (Hebrews 5:7). Instinctively, as man He sought to escape it. He found Himself in a moment of decision. In His agony He prayed to His Father, "Abba, Father, all things are possible to thee; remove this cup from me; yet not what I will, but what thou wilt" (Mark 14:36).

His prayer revealed the depths of His agony and sorrow. It revealed as well His "incomparable spiritual strength (and) immovable desire and decision . . . to bring about the will of the Father." Jesus offered His unconditional love and trust to the Father. He reached the extreme limits of self-denial "not what I will" - in order to accomplish His Father's will. His acceptance of death was not some kind of stoic passivity and resignation but an act of absolute love and obedience. In that moment of decision, when He declared His acceptance of death to be in agreement with the Father's will, He broke the power of the fear of death with all its attending uncertainties, anxieties and limitations. He learned obedience and fulfilled the divine plan (Hebrews 5:8-9).

Judas betrayed Christ with a kiss, the sign of friendship and love. The betrayal and crucifixion of Christ carried the ancestral sin to its extreme limits. In these two acts the rebellion against God reached its maximum capacity. The seduction of man in paradise culminated in the death of God in the flesh. To be victorious evil must quench the light and discredit the good. In the end, however, it shows itself to be a lie, an absurdity and sheer madness. The death and resurrection of Christ rendered evil powerless.

On Great Thursday light and darkness, joy and sorrow are so strangely mixed. At the Upper Room and in Gethsemane the light of the kingdom and the darkness of hell come through simultaneously. The way of life and the way of death converge. We meet them both in our journey through life.

In the midst of the snares and temptations that abound in the world around and in us we must be eager to live in communion with everything that is good, noble, natural, and sinless, forming ourselves by God's grace in the likeness of Christ.

Icon of the Mystical Supper - Institution of the Holy Eucharist

Christ is the central figure at the table. Saint John the Beloved [Evangelist, Theologian] is seated at Christ's right; as the youngest of the disciples he is depicted as beardless. Judas Iscariot the Betrayer is the third figure from Christ's left; he is depicted dipping into the dish (Matthew 26:20-25). Saint John the Beloved receives in his left hand a piece of the Body of Christ; another morsel is on the table before Christ. The chalice containing the Precious Blood of Christ is in His Left hand.

Several unique services mark the Orthodox celebration of Holy Thursday. The main service of the day is the Vesperal Divine Liturgy of Saint Basil that is conducted on Holy Thursday morning. This Liturgy commemorates the institution of the Holy Eucharist.

In Christian antiquity it was customary to baptize the catechumens on the feast of Pascha. The oils of Chrism, used for the anointing of the neophytes or newly-baptized persons, were consecrated in advance, on Great Thursday. This practice continued through the late middle ages. The service of consecration was conducted annually. In time, however, it began to be celebrated occasionally, as the need to replace the Chrism arose.

Holy Chrism is also called Holy Myron. It is a mixture of olive oil, balsam, wine and some forty aromatic substances symbolizing the fullness of sacramental grace, the sweetness of the Christian life, and the manifold and diverse gifts of the Holy Spirit. At the Ecumenical Patriarchate in Constantinople, and at the centers of other Patriarchates and Autocephalous Churches, the Holy Chrism is blessed during the Liturgy on this day. The rite does not take place every year.

The Reserved Sacrament from the previous year is consumed by the priest after the Liturgy on either Great Thursday or Great Saturday in the usual manner.

In the event the Reserved Sacrament has been exhausted, or for any reason altered, lost or destroyed, or does not exist, as in the case of the founding of a new church, the priest may consecrate a second Lamb at any Divine Liturgy, and prepare it in the manner described above, and place it in the Artophorion.

The Service of the Nipter (Washing of the Feet)

It appears that the Church had a ceremony of the Washing of the Feet annually on Great Thursday in imitation of the event at the Last Supper. For the most part, it was limited to Cathedral Churches and certain monasteries. In time, the service fell into disuse except in certain areas. It is now being recovered by many dioceses throughout the Orthodox world. The service is elaborate, dramatic and moving. It is conducted with special solemnity at the Patriarchate of Jerusalem and at the Monastery of St. John the Theologian on the island of Patmos. The service is contained in a separate liturgical book.

When the glorious disciples were enlightened at the washing of their feet before the supper, the impious Judas was darkened by the disease of avarice, and to the lawless judges he betrayed You, the Righteous Judge. Behold, this man because of avarice hanged himself. Flee from the insatiable desire which dared such things against the Master! O Lord Who deals righteously with all, glory to You!

Receive me today, Son of God, as a partaker of Your mystical Supper. I will not reveal Your mystery to Your adversaries. Nor will I give You a kiss as did Judas. But as the thief I confess to You: Lord, remember me in Your Kingdom.