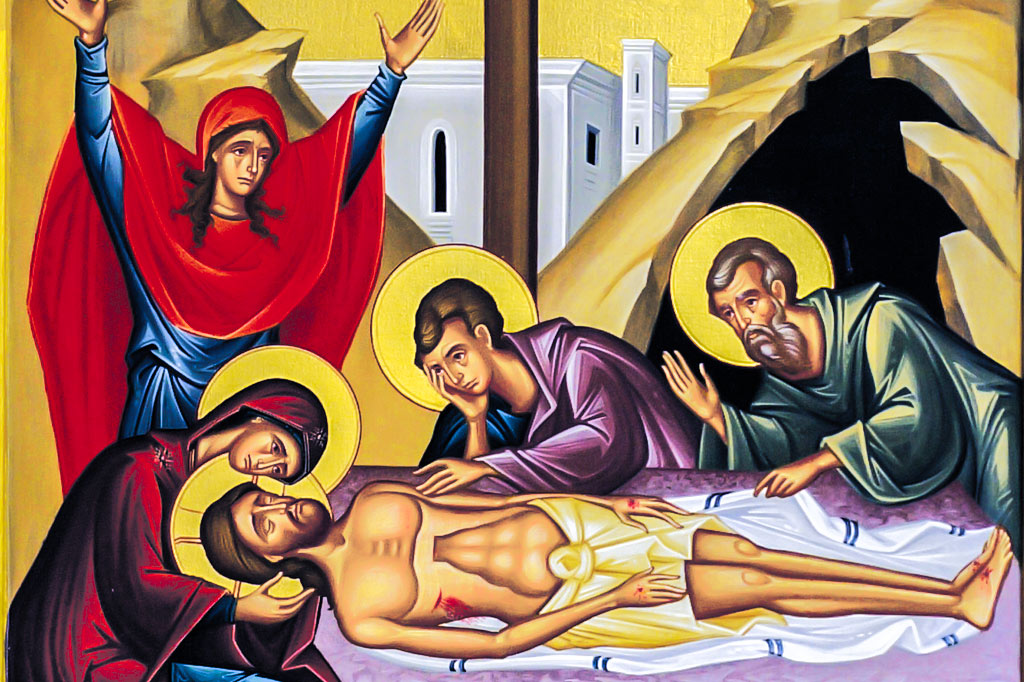 On Great and Holy Saturday the Orthodox Church commemorates the burial of Christ and His descent into Hades. It is the day between the Crucifixion of our Lord and His glorious Resurrection. The Matins of Holy Saturday is conducted on Friday evening, and while many elements of the service represent mourning at the death and burial of Christ, the service itself is one of watchful expectation. 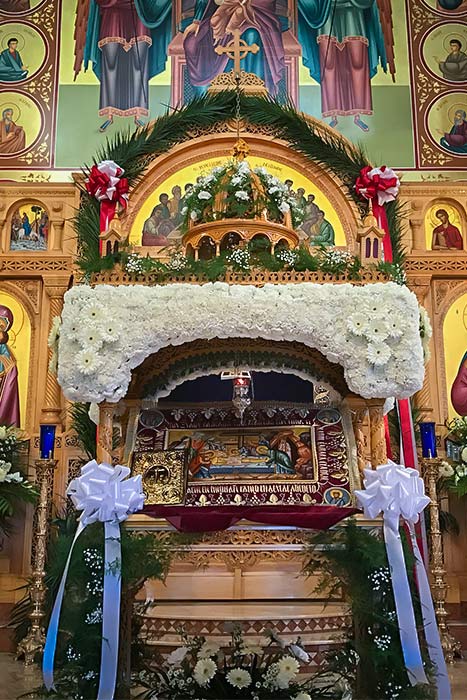 On Great and Holy Saturday the Church contemplates the mystery of the Lord's descent into Hades, the place of the dead. Death, our ultimate enemy, is defeated from within. "He (Christ) gave Himself as a ransom to death in which we were held captive, sold under sin. Descending into Hades through the Cross ... He loosed the bonds of death" (Liturgy of St. Basil).

On Great Saturday our focus is on the Tomb of Christ. This is no ordinary grave. It is not a place of corruption, decay and defeat. It is life-giving, a source of power, victory and liberation.

Great Saturday is the day between Jesus' death and His resurrection. It is the day of watchful expectation, in which mourning is being transformed into joy. The day embodies in the fullest possible sense the meaning of xarmolipi - joyful-sadness, which has dominated the celebrations of Great Week. The hymnographer of the Church has penetrated the profound mystery, and helps us to understand it through the following poetic dialogue that he has devised between Jesus and His Mother:

"Weep not for me, O Mother, beholding in the sepulcher the Son whom thou hast conceived without seed in thy womb. For I shall rise and shall be glorified, and as God I shall exalt in everlasting glory those who magnify thee with faith and love."

"O Son without beginning, in ways surpassing nature was I blessed at Thy strange birth, for I was spared all travail. But now beholding Thee, my God, a lifeless corpse, I am pierced by the sword of bitter sorrow. But arise, that I may be magnified."

"By mine own will the earth covers me, O Mother, but the gatekeepers of hell tremble as they see me, clothed in the bloodstained garment of vengeance: for on the Cross as God have I struck down mine enemies, and I shall rise again and magnify thee."

"Let the creation rejoice exceedingly, let all those born on earth be glad: for hell, the enemy, has been despoiled. Ye women, come to meet me with sweet spices: for I am delivering Adam and Eve with all their offspring, and on the third day I shall rise again." (9th Ode of the Canon) 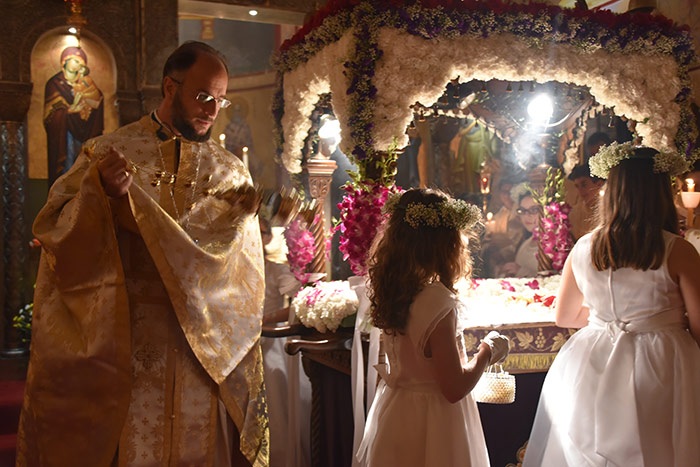 Great Saturday is the day of the pre-eminent rest. Christ observes a Sabbath rest in the tomb. His rest, however, is not inactivity but the fulfillment of the divine will and plan for the salvation of humankind and the cosmos. He who brought all things into being, makes all things new. The re-creation of the world has been accomplished once and for all. Through His incarnation, life and death Christ has filled all things with Himself He has opened a path for all flesh to the resurrection from the dead, since it was not possible that the author of life would be dominated by corruption.

Saint Paul tells us that:

"God was in Jesus Christ reconciling the world to Himself" (2 Corinthians 5:19). Hence, eternal life - real and self-generating - penetrated the depths of Hades. Christ who is the life of all destroyed death by His death. That is why the Church sings joyously "Things now are filled with light, the heaven and the earth and all that is beneath the earth" (Canon of Pascha).

The Church knows herself to be "the place, the eternal reality, where the presence of Christ vanquishes Satan, hell and death itself.

The solemn observance of Great Saturday help us to recall and celebrate the great truth that "despite the daily vicissitudes and contradictions of history and the abiding presence of hell within the human heart and human society," life has been liberated! Christ has broken the power of death.

It is not without significance that the icon of the Resurrection in our Church is the Descent of Christ into Hades, the place of the dead. This icon depicts a victorious Christ, reigned in glory, trampling upon death, and seizing Adam and Eve in His hands, plucking them from the abyss of hell. This icon expresses vividly the truths resulting from Christ's defeat of death by His death and Resurrection.

Icon of the Commemoration of Holy Saturday 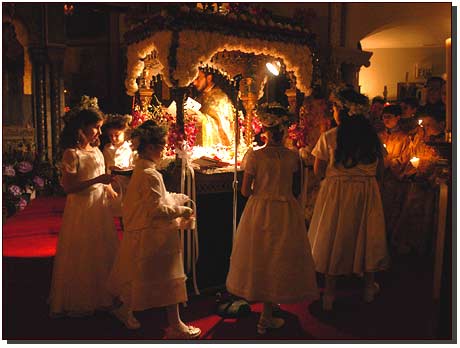 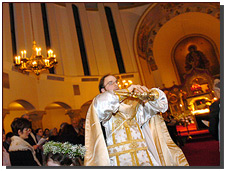 At the Third Stasis when the verse "Eranan ton Tafon ai miroforoi mira lian proi elthousai-early in the morning the myrrh-bearers came to Thee and sprinkled myrrh upon Thy tomb" is sung the priest sprinkles the Epitaphios with rosewater, using the rantistirion (sprinkler). This verse is usually repeated three or more times. It has become the custom to sprinkle the people as well.

At the conclusion of the service, the faithful go in procession with the Epitaphios and often the entire structure that represents the Tomb of Christ around the Church chanting the Thrice-Holy hymn, in a similar manner to the traditional procession for a funeral. 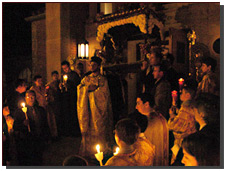 It is customary for the clergy and people to hold candles during the singing of the Lamentations and at the procession of the Epitaphios. This practice is rooted in ancient Christian burial practices. Candles were lit in order to symbolize the victory of Christ over death, and to express as well the Church's belief in the Resurrection. 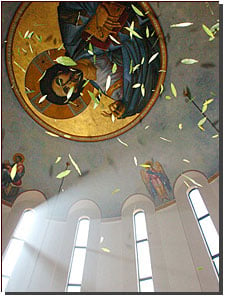 The Liturgy held on the morning of Holy and Great Saturday is that of Saint Basil the Great. It begins with Vespers. After the entrance, the evening hymn 'O Gentle Light' is chanted as usual. Then the Old Testament readings are recited. They tell of the most striking events and prophecies of the salvation of mankind by the death of the Son of God. The account of creation in Genesis is the first reading. The sixth reading is the story of Israel's crossing of the Red Sea and Moses' song of victory - over Pharaoh, with its refrain: 'For gloriously is He glorified'. The last reading is about the Three Children in the fiery furnace of Babylon, and their song of praise with its repeated refrain: 'O praise ye the Lord and supremely exalt Him unto the ages.' In the ancient church the catechumens were baptized during the time of these readings. The Epistle which follows speaks of how, through the death of Christ, we too shall rise to a new life. After the Epistle, the choir chants, like a call to the sleeping Christ: 'Arise, O Lord, Judge the earth, for Thou shalt have an inheritance among all the nations... The deacon carries out the Book of the Gospels, and reads the first message of the resurrection from Saint Matthew. Because the Vespers portion of the service belongs to the next day (Pascha) the burial hymns of Saturday are mingled with those of the resurrection, so that this service is already full of the coming Paschal joy. 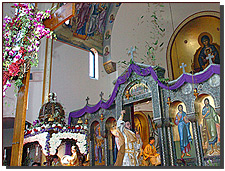 After the reading of the Epistle, the priest follows the custom of tossing of laurel, saying: "Arise, O God, and judge Thou the earth: for Thou shall take all heathen to Thine inheritance". The Cherubic hymn of this day is: "Let all mortal flesh keep silence and stand with fear and trembling...", a thoughtful hymn of adoration and exaltation. The Divine Liturgy ends with the Communion Hymn: "So the Lord awaked as one out of sleep, and He is risen to save us".

When he took down Your immaculate Body from the Cross, the honorable Joseph wrapped it in a clean linen shroud with spices and laid it for burial in a new tomb.

When You descended unto death, O Lord who yourself are immortal Life, then did You mortify Hades by the lightning flash of Your Divinity. Also when You raised the dead from the netherworld, all the Powers of the heavens were crying out: O Giver of life, Christ our God, glory be to You.

The Angel standing at the sepulcher cried out and said to the ointment-bearing
women: The ointments are appropriate for mortal men, but Christ has been shown to be a stranger to decay.

Arise, O God; judge the earth, for You shall inherit all the Gentiles.