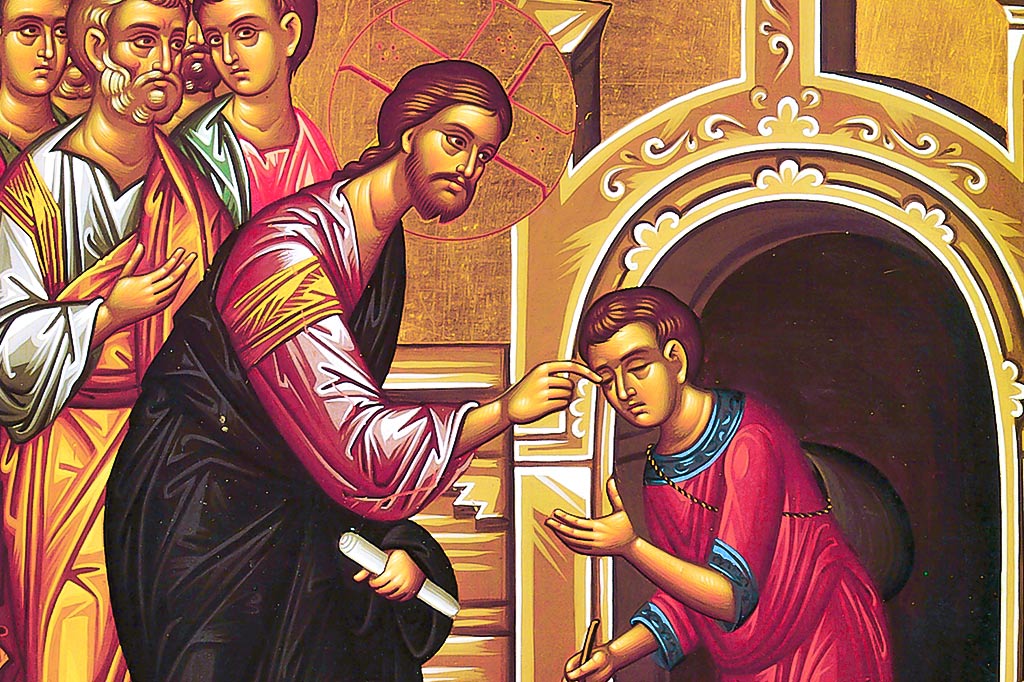 The sixth Sunday of Holy Pascha is observed by the Orthodox Church as the Sunday of the Blind Man. The day commemorates the miracle of Christ healing the man who was blind since birth. The biblical story of this event is found in the Gospel of Saint John 9:1-41.

The Lord Jesus was coming from the Temple on the Sabbath, when, while walking in the way, He saw the blind man mentioned in today's Gospel. This man had been born thus from his mother's womb, that is, he had been born without eyes (see Saint John Chrysostom, Homily LVI on John; Saint Irenaeus, Against Heresies, Book V:15; and the Second Exorcism of Saint Basil the Great). When the disciples saw this, they asked their Teacher, "Who did sin, this man, or his parents, that he was born blind?" They asked this because when the Lord had healed the paralytic at the Sheep's Pool, He had told him, "Sin no more, lest a worse thing come unto thee" (John 5:14); so they wondered, if sickness was caused by sin, what sin could have been the cause of his being born without eyes. But the Lord answered that this was for the glory of God. Then the God-man spat on the ground and made clay with the spittle. He anointed the eyes of the blind man and said to him, "Go, wash in the Pool of Siloam." Siloam (which means "sent") was a well-known spring in Jerusalem used by the inhabitants for its waters, which flowed to the eastern side of the city and collected in a large pool called "the Pool of Siloam." 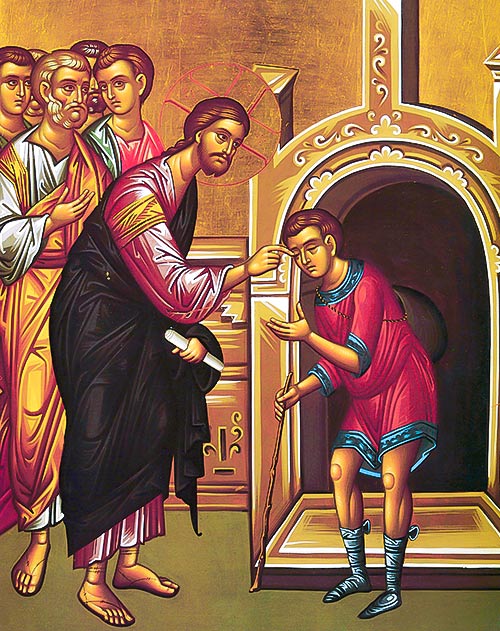 Therefore, the Savior sent the blind man to this pool that he might wash his eyes, which had been anointed with the clay-not that the pool's water had such power, but that the faith and obedience of the one sent might be made manifest, and that the miracle might become more remarkable and known to all, and leave no room for doubt. Thus, the blind man believed in Jesus' words, obeyed His command, went and washed himself, and returned, no longer blind, but having eyes and seeing. This was the greatest miracle that our Lord had yet worked; as the man healed of his blindness himself testified, "Since time began, never was it heard that any man opened the eyes of one that was born blind," although the Lord had already healed the blind eyes of many. Because he now had eyes, some even doubted that he was the same person (John 9:8-9); and it was still lively in their remembrance when Christ came to the tomb of Lazarus, for they said, "Could not this man, who opened the eyes of the blind man, have caused that even this man should not have died?" Saint John Chrysostom gives a thorough and brilliant exposition of our Lord's meeting with the woman of Samaria, the healing of the paralytic, and the miracle of the blind man in his commentaries on the Gospel of Saint John.

Icon of the Sunday of the Blind Man

The icon of the Sunday of the Blind Man depicts the biblical story of Christ healing the man who was blind since birth. Our Lord is shown placing the clay on the eyes of the man. He is with his disciples who are questioning Christ about the source of the man's affliction. The blind man is shown with his hand outstretched toward Christ expressing his faith and willingness to receive healing and grace from the Son of God. Our Lord has in His hand a scroll, which directs us to His statements, "I am the light of the world," (John 9:5), and "The Spirit of the Lord is upon me, because he has anointed me to preach good news to the poor. He has sent me to proclaim release to the captives and recovering of sight to the blind, to set at liberty those who are oppressed," (Luke 4:18). This are clear statements of the Gospel of salvation that comes through Christ. The scroll may also represent the role of Christ as Judge as depicted in Matthew and Revelation, and also later in the same passage on the healing of the blind man (John 9:39), Jesus said, "For judgment I came into this world, that those who do not see may see, and that those who see may become blind."

The Sunday of the Blind Man is celebrated with the Divine Liturgy of Saint John Chrysostom. On this Sunday and throughout the Paschal period until the Apodosis or leave-taking of Pascha, the day before the Feast of the Ascension, the services begin with the chanting of the troparion of Pascha, "Christ is risen..." This is the last Sunday of the Paschal period before the Feast of the Ascension, which will follow on Thursday of this week. The Apodosis or Leave-taking of the Feast of Pascha is on Wednesday, a day which is free of fasting and celebrated with the joy and brightness of the Feast of Feasts.

Reading selection courtesy of Holy Transfiguration Monastery, Brookline, MA
Icon of the Healing of the Blind Man used with permission from Theologic