Director of Special Events, Office of the Archbishop 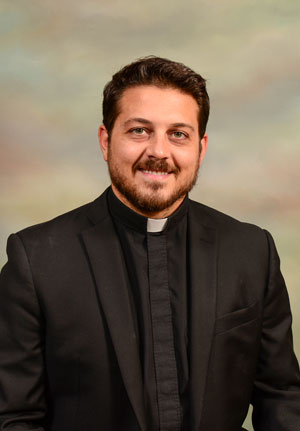 Father Evagoras is a canonically ordained Orthodox Priest and has served the Greek Orthodox Archdiocese of America since 2009.

Father Evagoras began his ministry at the Archdiocesan Headquarters in New York City. He has served as the Spokesman for Saint Nicholas National Shrine at the World Trade Center, the Director of the Office of Camping Ministries, the Archdiocesan Registrar, the Chairman of the Spiritual Court, the Director of Youth and Young Adult Ministries for the Direct Archdiocesan District, Chairman of the Youth Protection Committee, as well as the personal representative of the Archbishop of America to the Youth Committee of the Assembly of Canonical Orthodox Bishops.

From 2011 – 2019, Father Evagoras served as the Director of Ionian Village, the Archdiocesan Summer Camp in Greece. During his time as Director, Father oversaw the largest rise in camper registrations, with the programs being fully sold out almost every year. He revitalized the Spiritual Odyssey program for Young Adults, and later transformed that into IVNext, a Ministry Networking program that was funded through a generous grant from Leadership 100. Father conceived the “IV On the Go” program, that sent former Staff members to parishes across the Archdiocese to run weekend long retreats in the unique style of Ionian Village. Father and his Administrative team completely re-wrote the program and curriculum of the camp, focusing every aspect of the camp on love for Jesus Christ and a love for Greece, its people, culture and history. In addition, Father Evagoras oversaw a complete renovation of the campsite, the first in over 40 years. This included the building of a new chlorinated pool, installation of iconography in the camp’s iconic Chapel, construction of an outdoor chapel area, as well as a complete overhaul of the infrastructure of the camp and its systems following a catastrophic tornado in 2016. During his time as Director, Father Evagoras had the opportunity to meet and guide thousands of young campers and hundreds of young adult Staff Members at Ionian Village.

In 2018, Father Evagoras was appointed as the Dean of the Saints Constantine and Helen Greek Orthodox Cathedral of Brooklyn. In addition to overseeing all ministry at the Cathedral, he serves as Spiritual Advisor, Religion Department Chair and Instructor at the Cathedral’s A. Fantis School, a Pre-K through 8th grade day school.