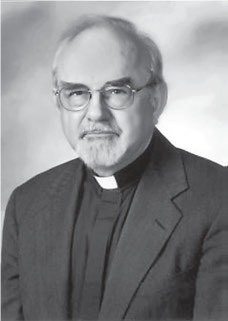 Fr. Constantelos was one of the most respected Orthodox theologians and scholars of Greek culture, as witnessed by his innumerable scholarly publications receiving critical acclaim by internationally recognized experts.

He earned his Ph.D. at Rutgers University and his D.D. from Holy Cross Hellenic College. He was the Charles Cooper Townsend Sr. Distinguished Professor Emeritus of History and Religious Studies at Richard Stockton College in New Jersey and also a Distinguished Scholar in Residence there, with specialties in the Byzantine or Medieval Greek world, ancient Greece, Rome and the Roman Empire, early Christianity, New Testament Studies, and the history of P philanthropy.

Additionally, he served as chairman of the Hellenic Studies program at Richard Stockton.

He was born July 27, 1927 in Spilia, Messinia, Greece, the fifth child of Christine and Ioannis Constantelos.

He attended elementary school in Messinia and high school in Kyparissia and, following his graduation, he was offered a scholarship to study at Holy Cross School of Theology in Brookline, Mass., and arrived in the United States in March 1947.

Upon graduating from the school in 1951 he attended the University of Michigan.

In 1954 he married Stella Croussouloudis of New York and Chios.

She predeceased him in March 2010.

He returned to Greece where he enrolled and attended courses at the School of Theology, University of Athens (1954-1955).

Upon his return to the United States in May of 1955, he was ordained in July, 1955 and assigned to St. Demetrios Church in Perth Amboy, N.J. During his diakonia at St. Demetrios (1955-1964) he pursued post-graduate studies at Princeton Theological Seminary, Princeton, NJ, (1957-59), receiving a Th. M. in New Testament studies, and Rutgers University (1959-64), receiving an M.A. in 1963 and Ph.D. in 1965 in the history of Byzantine Civilization. He has received several scholarships, fellowships and honors including the Lane Cooper Fellowship and University Fellowship at Rutgers University, a Junior Fellowship at Dumbarton Oaks of Harvard University, several grants, an honorary doctorate in theology by Hellenic College/Holy Cross and several distinctions from academic, professional and social organizations.

Beginning in 1962, he taught at Rutgers University, Hellenic College, Boston College, New York University and lectured at several universities and colleges in the United States and before many professional, religious, academic and civic organizations.

Fr. Constantelos was an associate editor of the Journal of Ecumenical Studies at Temple University, and a member of the New Revised Standard Version Bible Committee of the National Council of Churches of Christ in the USA. He also received several academic, community and book awards from 1959 to 2002.

Fr. Constantelos published more than a dozen books and hundreds of articles on Hellenism, philosophy, history and theology.

He was predeceased by Presvytera Stella in March 2010. Survivors include four children, Christine, John, Helen and Maria, and six grandchildren.