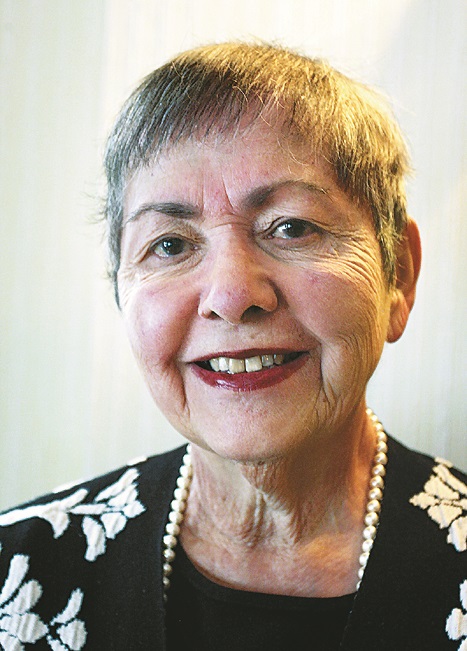 QUINCY, Mass. - Christine Sophia Karavites, one of the Church’s most effective and accomplished lay leaders, died peacefully March 19 after a long battle with cancer.

She was 77, and had been a highly active and dedicated trustee of the National Philoptochos, HCHC and Saint Basil Academy boards for many years.

A member of the HCHC Board of Trustees for more than a decade, Christine was a cornerstone of governance, strategic planning, and leadership for the institution.

She had also served as the board secretary and was a volunteer consultant for the president’s office.

“There was not a trustee more loyal to HCHC and the Orthodox faith than Christine,” said Thomas C. Lelon, PhD, the Board of Trustees vice chairman. “Her commitment to our school was extraordinary. I will miss her greatly as both a co-worker and personal friend.”

HCHC President Fr. Christopher Metropulos stated, “May Our Lord and God and Savior Jesus Christ, through the prayers and intercession of His Most Pure Mother and all the saints, remember Christine in His Kingdom, now and forever and unto the ages of ages. Memory eternal.”

She was appointed to the National Philoptochos Board in 1998 by Archbishop Spyridon and served with distinction as secretary of the Executive Board and Public Relations Committee chairman.

In that capacity, Christine was in charge of submitting the articles and photos for the National Philoptochos page in the Orthodox Observer, and for the Children’s Medical Fund Luncheon, National Biennial Convention and Philoptochos Center of Philanthropy campaigns.

In 2014, she prepared a heartwarming tribute to Greek-American veterans who served their country faithfully throughout the decades. Her videos to commemorate the 75th and 85th anniversaries of the Philoptochos Society and to announce the establishment of the Philoptochos Center of Philanthropy were highly regarded and shared widely. In addition, she also served as the National Archives/History Committee chairman.

“Christine was a caring and dedicated individual who brought much to our organization,” said National Philoptochos Office Director Helen Lavorata. Her devotion to her faith did not end with her service to Philoptochos and HCHC.

As a member of the Saint Basil Academy Board of Trustees, Christine was very active in the institution and each year served as emcee for the commencement and Christmas program.

Fr. Constantine Sitaras, Academy director stated, “When I hear these words of our Lord which are read on Judgment Sunday prior to Holy Lent, ‘Truly, I say to you, as you did it to one of the least of these my brethren you did it to me,’ I think of Christine Karavites.

“Christine Karavites of blessed memory in her life understood the mandate of our Lord to ‘feed the hungry, care for the poor, clothe the naked, shelter the homeless. To the core of her being, Christine was committed to her Church and the teachings of Our Lord and Saviour. How bold an observation, one might say and how could someone possibly know this.

Locally in Massachusetts, Christine served as senior consultant with the University of Massachusetts, Office of the President, Donahue Institute. She also held key leadership positions in the Commonwealth of Massachusetts for the past 20 years including the Massachusetts Department of Employment and Training, the Brockton Regional Employment Board and the Metro South Chamber of Commerce.

Christine’s community service included serving on the Annunciation Greek Orthodox Church board in Brockton. She also was a leader in the Greek Orthodox Diocese of New England serving as diocese advisor and past president of her Ladies Philoptochos Society chapter and represented the Metropolis of Boston and the Archdiocese at national and international conferences.

Born Sept. 15, 1939, in Muskegon, Mich., she grew up in Chicago, the daughter of the late William Chonis and Anna (Mavraidis) Chonis. Christine lived a life devoted to the Orthodox faith.

She was the beloved wife of Peter Karavites.

In addition to her husband, she is survived by her daughter, Kalliope Micalizzi and her husband, David; her son, Themistocles Karavites, and his wife, Emilija; granddaughters, Kristina Sophia Micalizzi and Athena Wren Karavites; and her sister, Helen Innis Lutz. Christine was the sister of the late Gus Chonis and Pauline Stavros.

The funeral service took place March 23 at Holy Cross Chapel on the campus of HCHC.

At the service, Archbishop Demetrios offered a deeply moving and personal eulogy that remembered Christine as a “deeply spiritual, yet practical worker in the Church;” a woman of “extreme courage and remarkable faith who worked with love and diligence to the very end in fulfillment of Christ’s teaching. She will be missed.”