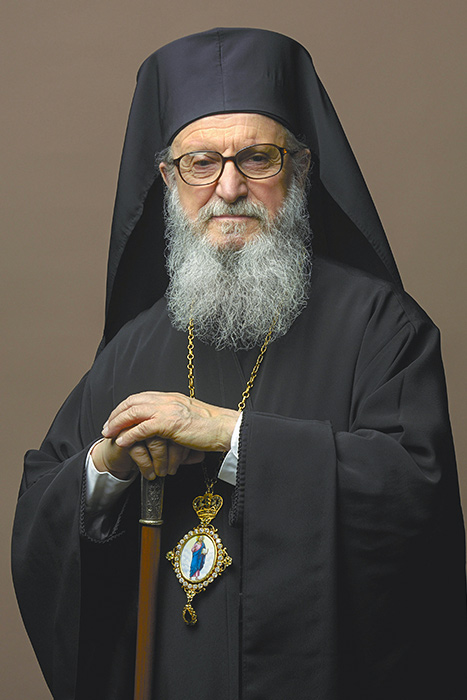 His Eminence Archbishop Demetrios (Trakatellis) was born in Thessaloniki, Greece. In 1950 he graduated with distinction from the University of Athens School of Theology. He was ordained a deacon in 1960, and a priest in 1964.

He was elected Bishop of Vresthena in 1967, auxiliary to the Archbishop of Athens, responsible for the theological education of the clergy. From 1965 to 1971, he studied New Testament and Christian Origins at Harvard University, and was awarded a Ph.D. “with distinction” in 1972. He earned a second doctorate in Theology from the University of Athens “with distinction” in 1977. From 1983 to 1993, he was the Distinguished Professor of Biblical Studies and Christian Origins at Holy Cross Greek Orthodox School of Theology in Brookline, Massachusetts. He also taught at Harvard Divinity School as Visiting Professor of New Testament. He was inducted in 2003 into the Academy of Athens as a member who resides abroad. In August 1991 he was elevated to be the Titular Metropolitan of Vresthena.

He was elected Archbishop of America on August 19, 1999 by the Holy and Sacred Synod of the Ecumenical Patriarchate and enthroned on September 18, 1999 at the Archdiocesan Cathedral of the Holy Trinity in New York.

During his ministry the leader of the Greek Orthodox Church in America, he has touched and inspired the lives of thousands of people with his incessant, methodical and loving archpastoral ministry.

As Archbishop of America, Exarch of the Ecumenical Patriarchate, and head of the Eparchial Synod of the Archdiocese, Archbishop Demetrios has traveled extensively throughout the U.S. and globally, officiating at services, consecrating churches, ordaining clergy, and extending the scope of the work of the Church in America, and sharing in the vitality and accomplishments of the people and the parishes. Throughout his ministry Archbishop Demetrios has led the Church in responding to national and international needs and crises, including the tremendous ordeals confronting the Ecumenical Patriarchate, the terrorist attack of Sept. 11, 2001 and the destruction of St. Nicholas Greek Orthodox Church, the Macedonian issue, and the Cyprus issue.  He has led the philanthropic responses to natural disasters including the mudslides in California, the tsunami in Asia, Hurricane Katrina in the Gulf Coast, Hurricane Sandy on the East Coast, and the appeal for aid to Greece after the devastating fires. In 2012, when the financial crisis in Greece took immense proportions, the Archbishop initiated a rigorous campaign for humanitarian assistance to the people of Greece, which is channeled through the Church of Greece.  A similar effort was also initiated in 2013 for humanitarian assistance for the people of Cyprus who were faced with a severe financial crisis.  Both are ongoing efforts that continue to offer significant assistance. In recognition of his efforts for a just resolution in Cyprus, he received the highest honor of the Republic of Cyprus, the medal of the Great Cross of the Order of Archbishop Makarios III.  He was also bestowed with the Great Cross of the Order of Phoenix, the highest honorary distinction of the Hellenic Republic.

An Orthodox hierarch for more than 45 years, a theologian, statesman, and biblical scholar of international recognition, His Eminence has faithfully demonstrated the healing power of Christ’s truth and compassion. His message has been one of unity, genuine relationships, and an ever-increasing commitment to God and to service in the name of Christ.  He has manifested the effectiveness of God’s grace in establishing peace, tranquility, stability and trust both within the Church and throughout the world.

Archbishop Demetrios was the Archbishop of America from August 19, 1999 through May 9, 2019 He was born Demetrios Trakatellis in Thessaloniki, Greece on February 1, 1928. In 1950 he graduated with distinction from the University of Athens School of Theology. In 1960 he was ordained a deacon, and in 1964 a priest. More »