Print A Relationship to be Emulated: The Maternal Kinship Between the Mother of God and Her Cousin Elizabeth
Dr. Carrie Frederick Frost

Picture a gray-haired woman, deep into her pregnancy, looking up from her work in surprise as she hears her beloved cousin call to her. As the older woman gladly greets and embraces the younger, she realizes that their kinship extends beyond their status as cousins. They are both expectant mothers and now their kinship is maternal, as well as familial.

This of course is the tale of the Visitation, the meeting of Mary, the Mother of God, and her cousin Elizabeth, the mother of St. John the Forerunner. This story, and its depictions in Orthodox iconography, has much to say about the Church’s esteem for expectant motherhood. This meeting also speaks to the richness of relationships between mothers, a richness that is sometimes lacking in our twenty-first century experience of motherhood but is worth invoking and nourishing today with Mary and Elizabeth in mind.

Previous to the encounter between Mary and Elizabeth, Mary gave her fiat, her willful assent to her extraordinary pregnancy, and the angel Gabriel told Mary about her cousin’s late-life pregnancy. Mary’s reaction, just after learning of her own condition, is to seek Elizabeth’s company, which she does—as Luke tells us—in “haste”:

Now Mary arose in those days and went into the hill country with haste, to a city of Judah, and entered the house of Zacharias and greeted Elizabeth. And it happened, when Elizabeth heard the greeting of Mary, that the babe leaped in her womb; and Elizabeth was filled with the Holy Spirit. Then she spoke out with a loud voice and said, “Blessed are you among women, and blessed is the fruit of your womb! But why is this granted to me, that the mother of my Lord should come to me? For indeed, as soon as the voice of your greeting sounded in my ears, the babe leaped in my womb for joy. Blessed is she who believed, for there will be a fulfillment of those things which were told her from the Lord.” (Luke 1:39–45)

In many Visitation icons, both Mary and Elizabeth are visibly pregnant, sometimes even with shadowy images of Jesus Christ and John the Forerunner in their wombs. Though Mary would likely not have been showing at this time, this is suggestive imagery of her pregnancy, which is possible because icons are not traditionally restricted to a chronological narrative. The emphasis on pregnancy, both scriptural and iconographic, is striking. It indicates the seriousness with which the Orthodox Church takes the human person, even in the womb—there is no question that these babies are fully human persons from their earliest beginnings. The inclusion of this episode in Luke’s Gospel and its early integration into the imagery of the Church indicate the esteem the Church has for expectant motherhood, an esteem that makes perfect sense given that this is the route through which Jesus Christ became incarnate and walked among us. 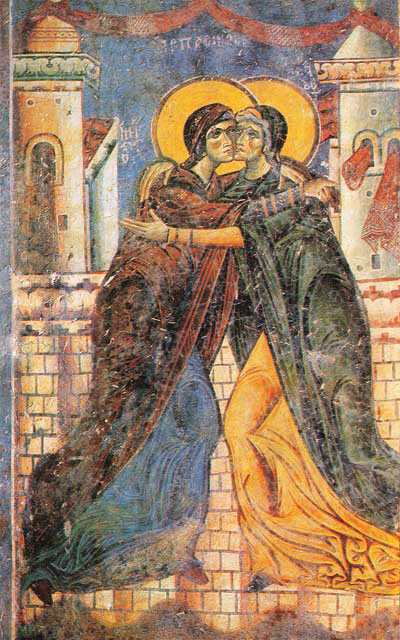 It is also notable that images of the Visitation date back as early as the fifth century, stamped into metal ampullae (small vessels used to hold holy oil used by pilgrims) in a time period that predates the inclusion of the feast on Church calendars, on March 30. This story of Mary and Elizabeth’s time together must have spoken to early Christians because images were made before a widespread feast was established—it usually works the other way around. Perhaps this story resonated because it signifies a unique sort of relationship that is given scant attention elsewhere in kinship: the relationship between mothers, their maternal kinship.

Mary may well have been tired from her traveling as well as from the fog-like fatigue many women experience during early pregnancy. Elizabeth may have been experiencing the sharp, jabbing ligament pains common to the beginning of the third trimester or other physical challenges of late pregnancy and perhaps she was exhausted by the challenges of a late-life pregnancy. Yet, whatever discomforts they were experiencing, these two women are clearly delighted to see each other.

Elizabeth’s response is also joyful; she issues the proclamation that will be prayed untold times amongChristians for centuries to come: “Blessed are you among women, and blessed is the fruit of your womb!” Mary andElizabeth are already celebrating the Incarnation because they know (and so does the unborn John the Baptist) that it is underway. They share this awesome secret in maternal kinship.

The joy of the connection between these two mothers and their two sons is reflected in the Orthodox Church’s iconographic depiction of this story. As seen in the twelfth century example here, Elizabeth and Mary are greeting each other in a cheek-to-cheek embrace. They are shown rushing into each other’s arms, with their robes aflutter behind them; this is a depiction of the “haste” that Luke describes. It is no accident that there are only a few other instances in which icons depict two people embracing. In this case, two cousins and dear friends are eager for each other’s company, sharing, as they are, this exceptional time in their lives.

In addition to giving us insight into the Church’s appreciation for motherhood, the story of Elizabeth and Mary also offers a model for mothers today—a model for maternal kinship among mothers. We live in a time and place where many of us no longer dwell in the same town as our mothers and sisters. Pregnancy and early motherhood are life-changing experiences, and it can be disheartening and isolating to experience them without the company of other women and other mothers. We have the example of Mary, whose immediate inclination after the Annunciation is to seek out the company of her cousin. As the story shows, these women find solace in the company of each other.

Elizabeth and Mary also offer us a portrait of supportive maternal kinship. The climate of motherhood in America today is charged with competitiveness, with ample opportunities to compare whose baby spoke in a full sentence first and many options for comparing circumstances or for sorting oneself into different parenting styles that are often defined in unfavorable contrast to each other: “tiger moms” or “free range”or “attachment” parenting. Some of these parenting styles are thoughtfully chosen; some are culturally inherited; some are largely socio-economically determined. Different modes of parenting may not be bad unto themselves, but the divisiveness between them is antagonistic and unhelpful.

Mothers (and fathers) within the Church today are not immune to these tribal distinctions, but they are called to rise above them and they have the example of Elizabeth—a mother-to-be of “advanced maternal age”—and Mary—a young mother who was intended to live a married but consecrated chaste life with the protection of the much older Joseph, intentions which were surely thrown into question for those around her as her belly began to swell. Both of these situations are scandalous in their way and quite divergent from each other, but these women connected based on their maternal kinship, valuing it over their circumstances.

Luke tells us they spend three entire months together: “And Mary remained with her [Elizabeth] about three months, and returned to her house” (1:56). Most of us are not able to decamp from our lives to spend three months with a mother friend, but we can seek out those friendships and create and share restorative time with other mothers. We can follow this example of Mary and Elizabeth who share this intimate time of their lives with one another, who share the grace and joy of pregnancy. Indeed, Mary sings her Magnificat (“My soul magnifies the Lord …” Luke 1:46–55) not to Gabriel, not to Joseph, nor alone, but to her pregnant cousin Elizabeth. As mothers, let us sing the joys—and the pains and challenges—of motherhood together, not in competition, but in maternal kinship. Let us make haste to support and care for each other.

Carrie Frederick Frost, PhD, is a scholar of Orthodox theology, a professor at Saint Sophia Ukrainian Orthodox Seminary and a mother of five. Her work focuses on motherhood, family, childhood and men and women in Orthodoxy, and her book, Maternal Body: A Theology of Motherhood from the Christian East(Paulist Press, 2019) is available now.