Messages of Condolence to Coptic Churches in Egypt and U.S. 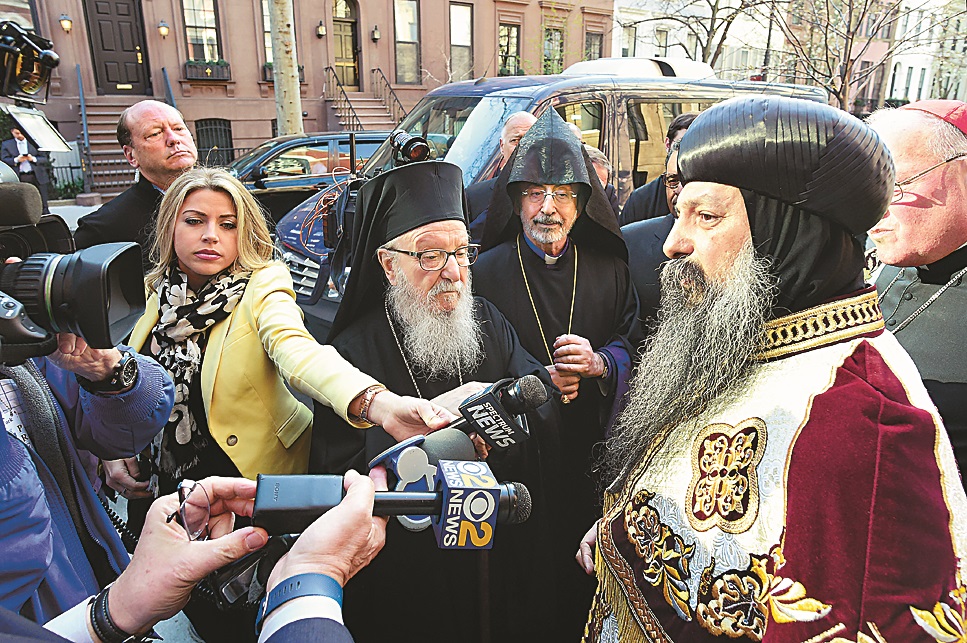 Archbishop Demetrios and other religious leaders in New York visited with Bishop David of the Coptic Orthodox Diocese of New York and New England on April 9, Holy Friday, to personally express their condolences and prayers for the Palm Sunday ISIS attacks in Egypt. Other religious leaders attending included Archbishop Khazag Barsamian (right of His Eminence), the metropolite of the Armenian Church of America (Eastern) Diocese; Timothy Cardinal Dolan of the Roman Catholic Archdiocese of New York (at right) and others from Protestant groups and Jewish clergy. They met at Our Lady of Peace Coptic Church on East 62nd Street in Manhattan. Several news media organizations and a police anti-terrorism unit also were present.
© GOA/D. Panagos

Editor’s note: Following the April 9 Palm Sunday ISIS attacks on two Coptic Orthodox Churches in Egypt that killed 40 people and injured more than 100, Ecumenical Patriarch Bartholomew, and Archbishop Demetrios issued condolence messages to the Coptic Church communities in Egypt and the United States. His All Holiness’ and the Archbishop’s messages are below.

Your Holiness Tawadros II, pope and patriarch of the Coptic Church in Egypt, our beloved brother in Christ: grace and peace from on high.

It was with a heavy heart that we learned of the terrorist attacks targeting your churches and faithful flock who, like us, gathered to pray and honor this most holy day of the ecclesiastical year marking the Lord’s triumphant entry into Jerusalem.

We witnessed in the media with great grief the destruction and mourning that these barbaric attacks have brought to your community, as well as to all of Christendom, and we hasten to convey our wholehearted condolences and the prayers of the Ecumenical Patriarchate. As a martyric Church, we also stand in solidarity with you and your people, who have prevailed courageously and faithfully for centuries over persecution and oppression.

The challenges posed to our present day and age by fundamentalism are great -- the pain of those mourning equally so. Yet, we understand that our responsibility to the contemporary world is to remain resilient in times of terror and faithful in times of doubt and unnerving circumstances. We worship the One who responded to the godless and unrepentant spirit of humanity, by descending from His heavenly abode to embrace us. He, for “us and our salvation”, became man in order that “men might be like God.” It was through His humility, forbearance, simplicity, and unceasing and inexhaustible love that He not only conquered sin, but also won for us the ability to be victorious with Him over sin and death.

Our victory through Christ Jesus was promised to us, most especially when persecuted for righteousness and because of His name. At this very moment, we remember His words: “Blessed are you when people insult you, persecute you and falsely say all kinds of evil against you because of me. Rejoice and be glad, because great is your reward in heaven….” (Matthew 5:11-12). May the promise of the Kingdom and the gift of grace be bestowed upon the victims of this tragedy and their families, and may our Lord grant peace and refreshment to all those suffering. May their memories be eternal and may He who accepted to ride upon a colt “as though riding upon the cherubim” grant us all unending faith, courage, and patience to endure and transform this “sinful and perverse generation”

Conveying to Your Holiness and the entire Coptic Church our sympathies once again, we embrace you with a “holy kiss” and remain with much love and fraternal honor.

At the Ecumenical Patriarchate,
Palm Sunday, 2017

NEW YORK – Archbishop Demetrios, upon receiving the tragic news of the horrific massacre on Palm Sunday, in the Coptic churches of St. George in Tanta and St. Mark’s Cathedral in Alexandria, Egypt, expressed in a letter profound and heartfelt condolences to the Coptic Church Hierarchs and their communities in America and through them to Patriarch Tawadros II and the Coptic faithful in Egypt.

The Archbishop in his letter further states: “We strongly believe that even in the dire circumstances of this tragedy, the love of God will prevail over the forces of darkness and hatred. We believe based on the experience of the Holy Week of Passion, that even after the Crucifixion, God defeated death and evil and triumphed through the Resurrection.

We stand firm and in solidarity with the victims and the families of this horrendous terrorist attack. We fervently pray for the repose of the souls of those who perished, for the consolation of their families and for the protection of all the members of the Coptic Christian Church in Egypt.