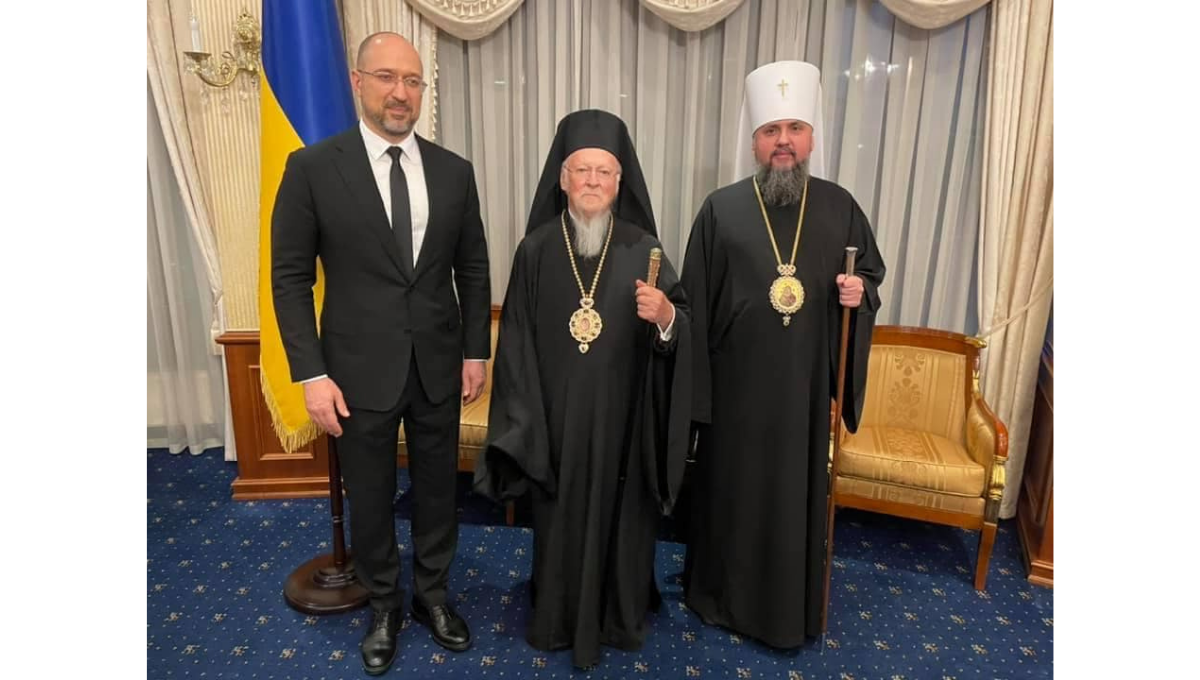 “I am going to Kyiv with a message of love and unity, a prayer for all who live in Ukraine.”

[Below is a translation of an interview that His All-Holiness Ecumenical Patriarch Bartholomew gave to ukrinform.ua. The original interview in Ukrainian can be found at https://www.ukrinform.ua/rubric-society/3301395-jogo-vsesvatist-varfolomij-arhiepiskop-konstantinopola-novogo-rima-i-vselenskij-patriarh.html ]

His Holiness Bartholomew, Archbishop of Constantinople - New Rome and Ecumenical Patriarch will arrive in Ukraine tonight. This is his third visit to our country. His Holiness visited Odessa in September 1997 and Kyiv in July 2008, but this visit is special in that it is the first since the Orthodox Church of Ukraine received autocephaly and coincides with the 30th anniversary of our independence.

In this exclusive interview, His Holiness, Archbishop of Constantinople - New Rome spoke to Ukrinform about the formation of the Orthodox Church of Ukraine, its development and growing strength, about efforts by outside forces, responses, and related challenges, and about the pandemic and the Mother Church’s stance towards vaccination.

- Your Holiness, your first visit to Ukraine since the Orthodox Church of Ukraine received the Tomos of Autocephaly begins today. What is the program and what are the expectations from this visit?

- First of all, I would like to note that I am visiting Ukraine at the invitation of the President of Ukraine Volodymyr Zelensky to take part in the celebration of the 30th anniversary of the Proclamation of Independence and to share the joy of the Ukrainian people on this occasion. I also received an official invitation from His Beatitude Metropolitan Epiphany of Kyiv and All Ukraine. I am convinced that I will rejoice in the progress of the newly created Orthodox Church of Ukraine. The Mother Church of Constantinople, from which more than 1,000 years ago your ancestors were baptized into Christianity at the request of St. Volodymyr, has never ceased to show interest in and concern for all of you and your local Church. Relations between Constantinople and Kyiv have remained strong and unshakable for ten centuries, and today they are more relevant than ever. I want to convey through this interview a message of love and unity to the clergy, faithful, and all brothers and sisters in Ukraine, who I look forward to meeting in person.

THE CHURCH CANNOT BE TERRORIZED; LIES AND DEFAMATION STRENGTHEN OUR FAITH

- We are very pleased with everything that has been achieved in the Orthodox Church of Ukraine from the granting of the Tomos of Autocephaly to the present day. We are proud of the ministry and testimony of this Church, without hiding the fact that it has become the object of ruthless acts of defamation and lies by certain circles that do not want there to be an Orthodox Church in Ukraine independent from external influences.

The Mother Church, the Ecumenical Patriarchate, also experiences everything that the Orthodox Church of Ukraine suffers from. Unfortunately, some people seem to be accustomed to lying and committing religious abuses, thinking that in this way they are intimidating the Ecumenical Patriarchate, the local autocephalous churches, and the newly formed Orthodox Church of Ukraine. However, Christianity cannot be threatened. The church cannot be terrorized. Lying and defamation do not upset us; to the contrary, they strengthen our faith in the canons, traditions, and Truth of the Church.

His Beatitude Metropolitan Epiphany of Kyiv is a prudent primate who knows how to manage church affairs effectively and in the spirit of the canonical tradition of Orthodoxy. We trust him and have optimistic hope for the future of the Orthodox Church of Ukraine. I urge him to continue to follow the straight path, the one that leads to education of the faithful and to unity.

- What would you say to the brothers and sisters of the Moscow Patriarchate who are convinced that the autocephaly of the Orthodox Church of Ukraine is "uncanonical" or "defective"?

- The problem with such people is that it is difficult for them to recognize reality, or that they refuse to recognize it. They are also ignorant of what autocephaly means, of its history and canonical practice. The Russian Church, to which they aspire to belong, received its autocephalous and patriarchal statuses from the Ecumenical Patriarchate. Why then do they not want to acknowledge that the same canonical justification of autocephaly which was validly applied to grant autocephaly and patriarchal status to the Russian Orthodox and other Orthodox Churches by the Ecumenical Patriarchate is in the same way valid for the Orthodox Church of Ukraine? The intercession of the Ecumenical Patriarchate is not uncanonical, rather it is their questioning of this intercession which is uncanonical. Clearly, they are not at all interested in canonical order, because in this instance they are clearly weighing the interests of foreign powers over ecclesiastical criteria.

REFUSAL OF VACCINATION IS NOT BASED ON THEOLOGICAL OR SCIENTIFIC GROUNDS

- The world community is actively fighting the coronavirus. In the Orthodox world, there are those who oppose vaccination, wearing masks, and maintaining social distance. What is the attitude of the Mother Church towards vaccination? Were you and those around you vaccinated?

- The current great crisis in the field of healthcare affects Orthodox Christians along with all of humankind. Of course, we are being criticized for dealing with and fighting against the pandemic by supporting the development of useful vaccines and other countermeasures. However, the refusal of vaccination and other protective measures is irrational and unjustified by theological or scientific criteria. I have said from the beginning that the pandemic threatens our faithful, but not our faith. It is a fact that a large number of believers who refused protective measures have become victims of this virus. That is why it is unacceptable in the face of so many victims and so much suffering to deny the existence of a pandemic, to regard it as created by someone, or to spread conspiracy theories. Unfortunately, this attitude shows indifference to others. However, anything that contradicts the commandment to love one's neighbor cannot be the will of God. The Church of Constantinople encourages the faithful to consult with their doctors and to vaccinate according to their instructions. Naturally, all of us at the Phanar, including myself, have been vaccinated.

SCIENCE IS A BLESSING FROM GOD, BECAUSE IT SERVES HUMANITY

- The Coronavirus has caused a large number of deaths. Suddenly, many of us have experienced the sudden illness or loss of loved ones. What do you advise to elevate us morally? What are the best means to support ourselves and our families?

- This is not the first time the Church has faced a pandemic. And each time the answer was prayer and observance of directed countermeasures. Today, science is proving that it can find solutions quickly and efficiently. Of course, there are limitations to scientific knowledge; but, because science serves humanity, it is a blessing from God. We gratefully accept this divine gift. Therefore, we are grateful to the scientists who have so quickly developed vaccines that protect us from the complications of the coronavirus. Moreover, we thank the doctors and other health professionals around the world who work daily to save people and fight Covid-19. I know that the doctors and other medical professionals in Ukraine are also doing their utmost to save patients. We greet them, bless them, and assure them that they are in our prayers, asking our Savior Christ to sustain their efforts. We also pray daily that God will give peace to the souls of the victims of this pandemic and comfort to their families.

- Your Holiness, this visit to Ukraine is dedicated to the 30th anniversary of the proclamation of Ukraine's independence. As the spiritual father of Orthodox Ukrainians, what would you like to say or wish to your flock in Ukraine and to Ukrainians in general?

- As already said, we share the joy of the Ukrainian people on this anniversary. We pray for the development, prosperity, unity and spiritual growth of all people living in Ukraine without exception. And, we are confident that the Orthodox Church of Ukraine will play an extremely active and important role in this positive progress and development. We have no doubt that the Orthodox Church of Ukraine will become a leading landmark on the path to church unity in your country. The granting of autocephaly by the Ecumenical Patriarchate will remain a vital moment and a milestone in the history of the Ukrainian people.