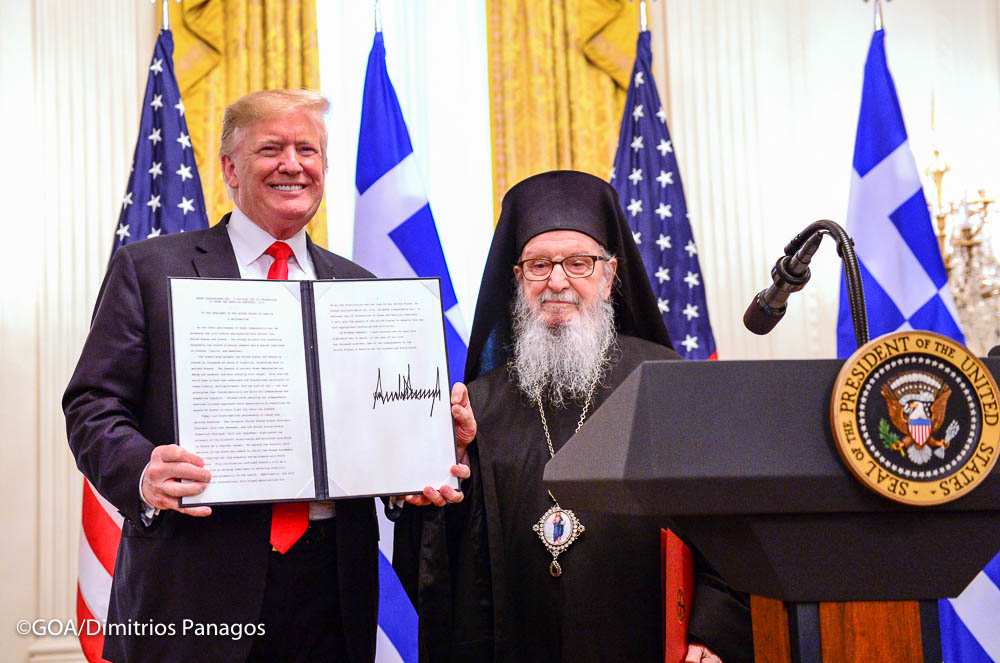 The President came on stage in the East Room of the White House together with Archbishop Demetrios and said it was a great honor to be with many friends to celebrate Greek Independence Day. Additionally, he recognized the Ambassadors of Greece and Cyprus to the U.S. Haris Lalacos and Marios Lysiotis, and the Ambassador of the European Union to the United States, Stavros Lambrinidis.  The President also recognized the presence of his cabinet members: Alex Azar, Secretary of Health and Human Services, Elaine Chao, Secretary of Transportation, Betsy DeVos, Secretary of Education, David Bernhardt, Acting Secretary of the Interior and U.S. Representative Chris Pappas (D-NH)

The President noted that “we commemorate the Greeks’ long struggle to regain their independence from a foreign empire…   On March 25th, 1821 Greek patriots rose up and fought to liberate their country, restore their sovereignty, and reclaim their destiny,” and at a later point he added: “This evening, we also celebrate the countless ways Greek Americans strengthen and uplift and inspire our nation.  You live by the values that are the foundation of America’s greatness.  You really do.  You honor hard work.  You love your families.  You enrich your culture.  And you embrace the American Dream and you keep faith in the blessings of Almighty God.  And that’s great.  The United States — and all of Western civilization — has been profoundly shaped by the extraordinary achievements of the Greek people, stretching all the way back to ancient times…”

President Trump recognized several individuals from the Greek-American Community including Senior Airman Gregory Manuel and Major Carl Hollister for their service in the U.S. Military; George Marafatsos, a parish councilmember at Saints Constantine and Helen Greek Orthodox Church in Silver Spring, Maryland; Aphrodite Skeadas, past president of the Greek Orthodox Ladies Philoptochos Society; and Father Kosmas Karavellas, who serves the Greek Orthodox community in Annapolis, Maryland; And he said that “each of these remarkable individuals represent the stories of so many Greek Americans in the room.”

His Eminence Archbishop Demetrios Geron of America in addressing the President and the audience said:

For the third time under your Presidency we have, as the Greek-American Orthodox Christian community, the exceptional opportunity to celebrate the Greek Independence Day at the White House.  This is a celebration honoring a unique fight for freedom and justice by our ancestors in 1821, two centuries ago.  A very small number of people without adequate resources, after four centuries of harsh, foreign occupation, stood up against the mighty Ottoman Empire and by an amazing determination, huge sacrifices, and the invincible assistance of God, they managed to establish again Greece as an independent and free state.  There would be no better place to remember such an historic event than the White House, the symbol of the American nation which is a beacon of freedom for all.

Throughout many years we have been at the White House for the celebration of Greek Independence Day and we have always raised issues of freedom, especially in regards to freedom of religion for our Ecumenical Patriarchate, justice for the island of Cyprus, and the proper name of a neighboring to Greece Balkan  State.  Knowing your personal dedication, Mr. President, to the most valuable issues of justice and freedom for all, we thank you for listening to our voice, and we ask you to continue your support to the aforementioned issues.

As always, you and your family have our warmest prayers for abundant blessings from Almighty God, the Giver and Guarantor of freedom, justice and  dignity for every human being and for all nations on earth.  Thank you.