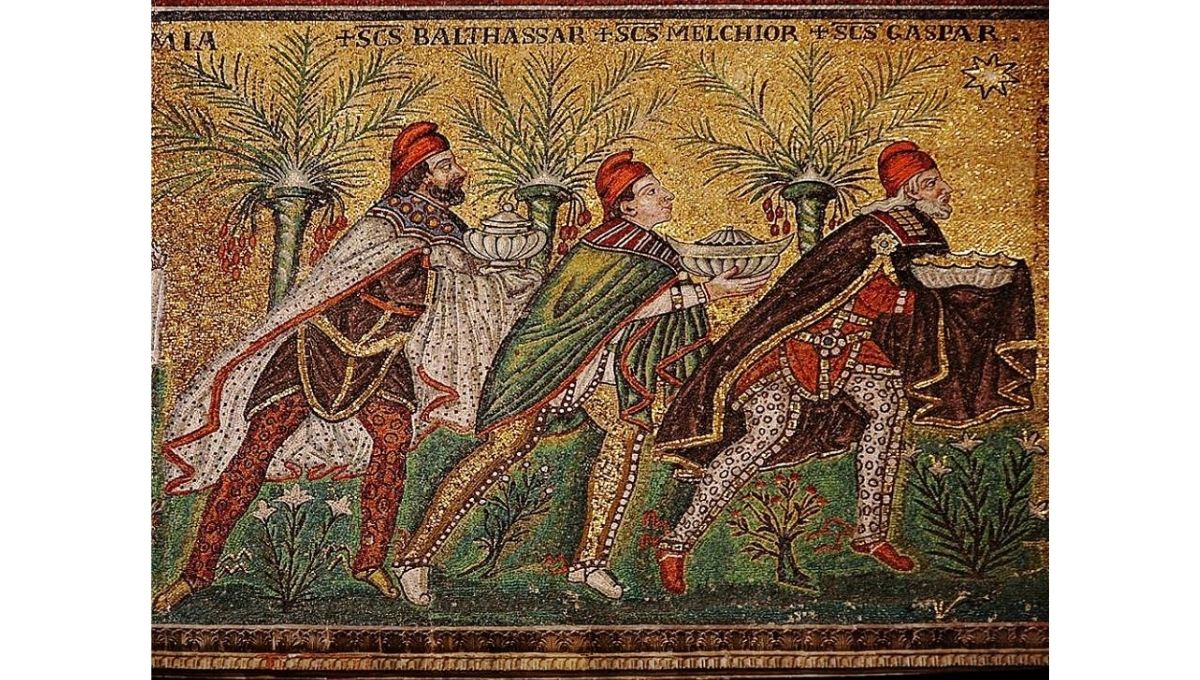 Nearly every year during the Nativity season printed journals and articles posted online flood us with the same resounding question “What Was the Star of Bethlehem?”

Among the four canonical gospels, Matthew is the only one that mentions the “star of Bethlehem.”

“In the time of King Herod, after Jesus was born in Bethlehem of Judea, wise men from the East came to Jerusalem, asking, ‘Where is the child who has been born king of the Jews? For we observed his star at its rising, and have come to pay him homage’” (Matthew 2:1–2). Having learned from priests and scribes that the Messiah was to be born in Bethlehem, king Herod sent the magi to Bethlehem. “And they set out; and there, ahead of them, went the star that they had seen at its rising, until it stopped over the place where the child was. When they saw that the star had stopped, they were overwhelmed with joy. On entering the house, they saw the child with Mary his mother; and they knelt down and paid him homage. Then, opening their treasure chests, they offered him gifts of gold, frankincense, and myrrh” (Matthew 2:9–11).

Not a few Christmas-triggered articles compete with one another seeking either to dismiss the historicity of the event or to find the best much for the “star of Bethlehem” among several scientifically proved celestial phenomena that have occurred between the years 6 B.C. and 4 A.D. the putative period during which the birth of our Lord is placed based on internal evidence (the closeness of Jesus’s birth to king Herod’s death) and external evidence (king Herod’s death in 4 B.C.)

Excluding the possibility of a meteor due its brevity, everything from comets to planetary conjunctions have been closely assessed and evaluated.

In 1977, Walter Sullivan suggested a comet like the “Broom Star” reported by Chinese astronomers in the year 5 B.C. However, ancients saw in comets bad omens announcing doom and disaster so the “star of Bethlehem”, announcing the birth of a king, would not be a fitting celestial phenomenon as a comet.

Planetary conjunctions (like the “great conjunction” between Jupiter and Saturn which appeared in the sky on December 21, 2020) would be another plausible candidate for the “star of Bethlehem.” In the year 7 B.C. a conjunction of Jupiter and Saturn occurred on three different dates (May 29, September 30, and December 5). In the year 3 B.C., another conjunction occurred, this time between Jupiter and Venus (August 12). (See Eric Betz, “The Star of Bethlehem: Can Science Explain What it Really Was?” accessed at https://www.discovermagazine.com/the-sciences/the-star-of-bethlehem-can-science-explain-what-it-really-was.)

Nevertheless, in a continuous and thrill-driven rush for a scientifically accurate and definitive identification of the “star of Bethlehem,” we are often inclined to overlook some important prophecies of the Hebrew Bible (Old Testament), prophecies which would place securely the New Testament proclamation (kerygma), in our case the episode of the “star” travelling along with the magi from the East, in its cultural-religious setting so necessary to understand the gospel narratives that refer to natural phenomena or historical events by wrapping them up in the time-honored, mystically smelling / perfumed garment of old prophecies.

The case in point for such a scriptural contextualization of the “star of Bethlehem” is an old prophecy found in the book of Numbers—a prophecy that was traditionally labeled as “The Star of Jacob.”

Numbers 24:17: “I see him, but not now; I behold him, but not near. A star is emerging from Jacob; a scepter is rising from Israel, and it smashes the brow of Moab and the foundation of all the sons of Seth.”

This above quoted passage is found in the so-called “Balaam cycle” (Numbers 22–24). During Israel’s wandering through the wilderness, when the Hebrews came to camp in the Plains of Moab [modern Jordan], Balak, the king of Moab, sent a message to Balaam son of Beor, a soothsayer from the banks of the Euphrates, to come over to Moab and curse the Hebrews. Strangely, Balaam recognizes Yahweh as his own God (Numbers 22:18), and therefore, instead of cursing the Hebrews, Balaam begins to bless them.

A plaster inscription discovered at Deir ’Alla in Jordan in 1967, and dating back to approximately 700 B.C., mentions the name of a “visionary” (chzy), Balaam son of Beor, who could have been the same prophet spoken of in the Book of Numbers. The inscription was probably written originally on a wall or a stele hung on a wall of a sanctuary that collapsed during an earthquake. Interestingly, Balaam in the Old Testament is the worshipper of a god, ’el shadday “God of the mountain” (Numbers 24:4, 16) similar or identical to the one worshipped by the Balaam of the inscription. In a nutshell, the plaster inscription of Deir ’Alla supports the historicity of the “Balaam cycle.”

The most striking feature of the whole section on Balaam is that the God of Israel resorts to a non-Hebrew prophet to convey his will to the Hebrew tribes wandering through the Plains of Moab, specifically regarding their future vis-à-vis other nations. Moreover, God chooses a non-Hebrew prophet to deliver a prophecy pertaining to the time and circumstances of the Messiah’s birth.

Balaam’s prophecy contains three key words. First, the prophet speaks of a ‘star’ (kokab) emerging from Jacob. As the “star” in ancient Near East was used to designate a god or a deified king, the focus of this prophecy seemingly falls on a descendant of Jacob who would have divine qualities. The verb used here to describe the star’s movement is darak “to tread, to walk, to travel.”

We might add that the three “wise men, magi, astrologers” (magoi), in the New Testament application of Balaam’s prophecy, speak of a “star” (aster) that “had appeared” (phainomenou) in the “east” (anatole) (Matthew 2:1–2, 7, 9). This matches quite neatly with the place of Balaam’s prophecy, namely, the eastern side of the Jordan River. Second, Balaam mentions a “scepter” (shebet), which commonly signifies royal authority, as in Genesis 49:10. Third, the son of Beor emphasizes that both star and scepter, or god and king, emerge via a human agent, specifically the patriarch Jacob (also called Israel). This means that the one who is both divine and royal will also be human. Thus, the one prophesied by Balaam will be at the same time God, king and human being. Read in the context of the gospel account, this prophecy speaks of the Messiah and his triply faceted profile. This was seen prophetically in the gifts offered by the magi to the infant Jesus at his birth. According to Matthew 2:11, the three magi brought gifts of gold, frankincense, and myrrh. Each gift was telling Jesus’ fate on earth from a particular viewpoint: Gold indicated that he would be a king; frankincense that he would be a God; and myrrh that he would die, emphasizing his humanity.

Therefore, the “star” of Bethlehem, as briefly painted by Matthew, does signify both a phenomenon event and a hint at the “Star of Jacob” prophecy foretelling the emergence of an ideal ruler (cf. Micah 5:2/1 moshel “ruler”), the long-awaited Messiah, emerging out of Jacob (Israel).

Interestingly, Matthew makes no direct reference to Numbers 24 (i.e., Balaam’s prophecy on the “Star of Jacob”) since for him the star of Bethlehem was not so much an extraordinary celestial phenomenon but rather a substantial “sign” that Balaam’s words began to unfold in front of everyone’s very eyes.

And that was the “phenomenon” which would make the hearers of Matthew’s gospel pay more attention and read the old prophecy of Numbers 24:17 in light (pun intended!) of what occurred in Bethlehem in those days. We may add that Matthew is the gospel writer who makes extended use of old Scriptures as proof-texts for his narratives. But not this time! This time, Matthew abstains from linking the “star of Bethlehem” to the “Star of Jacob,” thus indirectly inviting his hearers and readers to search the Scriptures, more specifically Number 24:17, in order to get the “extraordinary” element not from a “star,” a celestial phenomenon of sorts, but from a metaphor, the “star of Jacob,” found in an old prophecy which reminds us every year about the triple facet of Jesus’s personality as God, King and Mortal Being, enigmatically hinted at by the three Wise Men’s gifts: frankincense, gold, and myrrh.