Dormition of the Theotokos

The doors of caring do now open unto us,
O most blessed Theotokos,
So that hoping in you we shall not fail;
Through you we may be delivered from adversities,
For you are the salvation of the Christian faith.
(Theotokion from the Service of the Small Paraklesis) 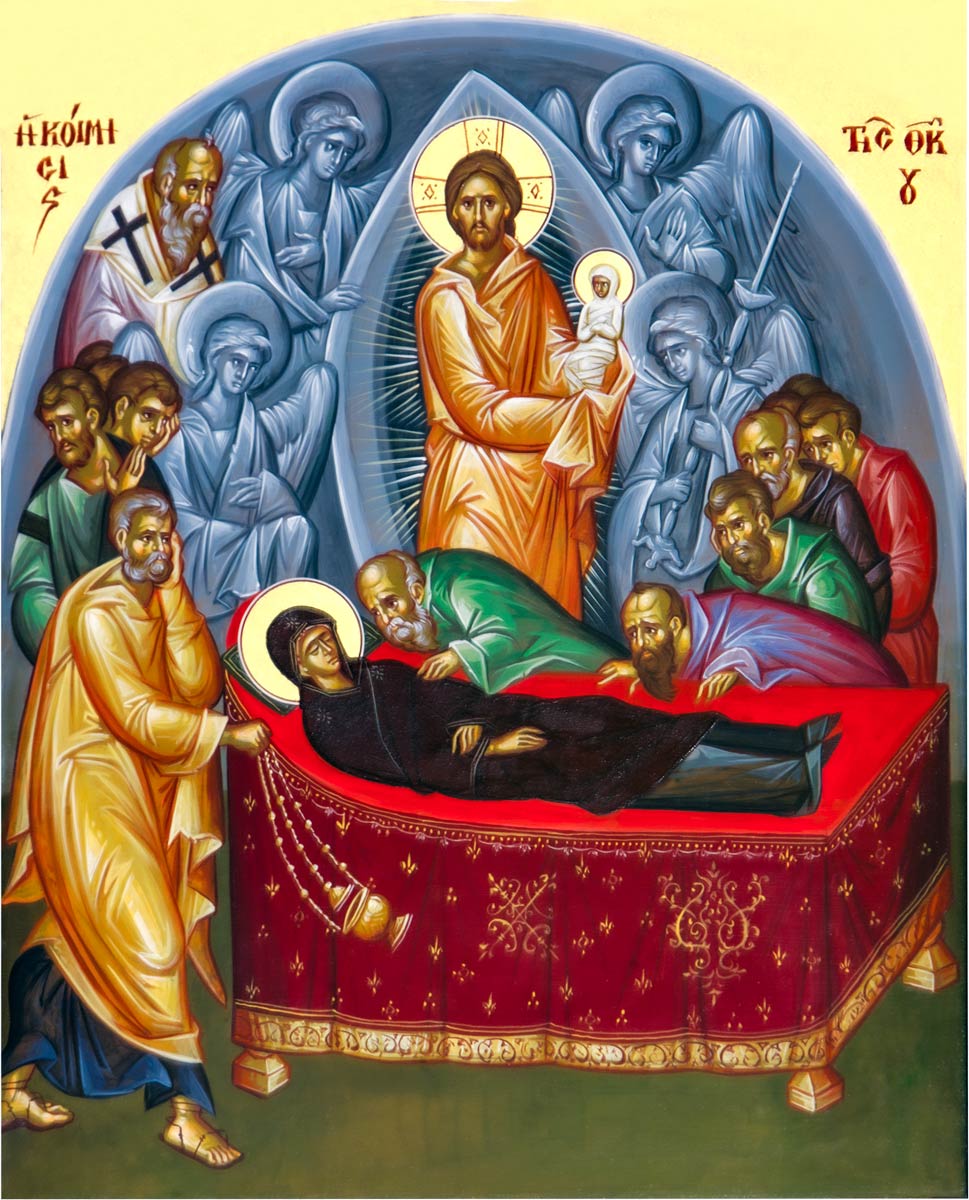 The Holy Scriptures tell us that when our Lord was dying on the Cross, He saw His mother and His disciple John and said to the Virgin Mary, "Woman, behold your son!" and to John, "Behold your mother!" (John 19:25-27). From that hour, the Apostle took care of the Theotokos in his own home.
Along with the biblical reference in Acts 1:14 that confirms that the Virgin Mary was with the Holy Apostles on the day of Pentecost, the tradition of the Church holds that she remained in the home of the Apostle John in Jerusalem, continuing a ministry in word and deed.

At the time of her death, the disciples of our Lord who were preaching throughout the world returned to Jerusalem to see the Theotokos. Except for the Apostle Thomas, all of them including the Apostle Paul were gathered together at her bedside. At the moment of her death, Jesus Christ himself descended and carried her soul into heaven. 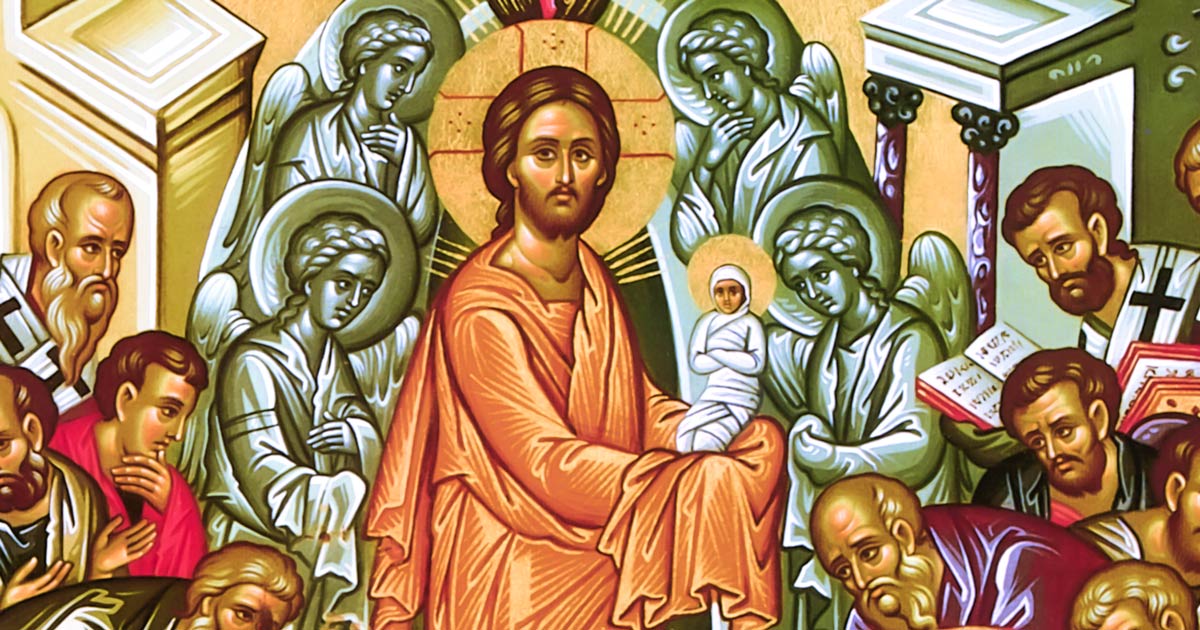 The Icon of the Feast of the Dormition of the Theotokos shows her on her deathbed surrounded by the Apostles. Christ is standing in the center looking at His mother. He is holding a small child clothed in white representing the soul of the Virgin Mary. With His golden garments, the angels above His head, and the mandorla surrounding Him, Christ is depicted in His divine glory. 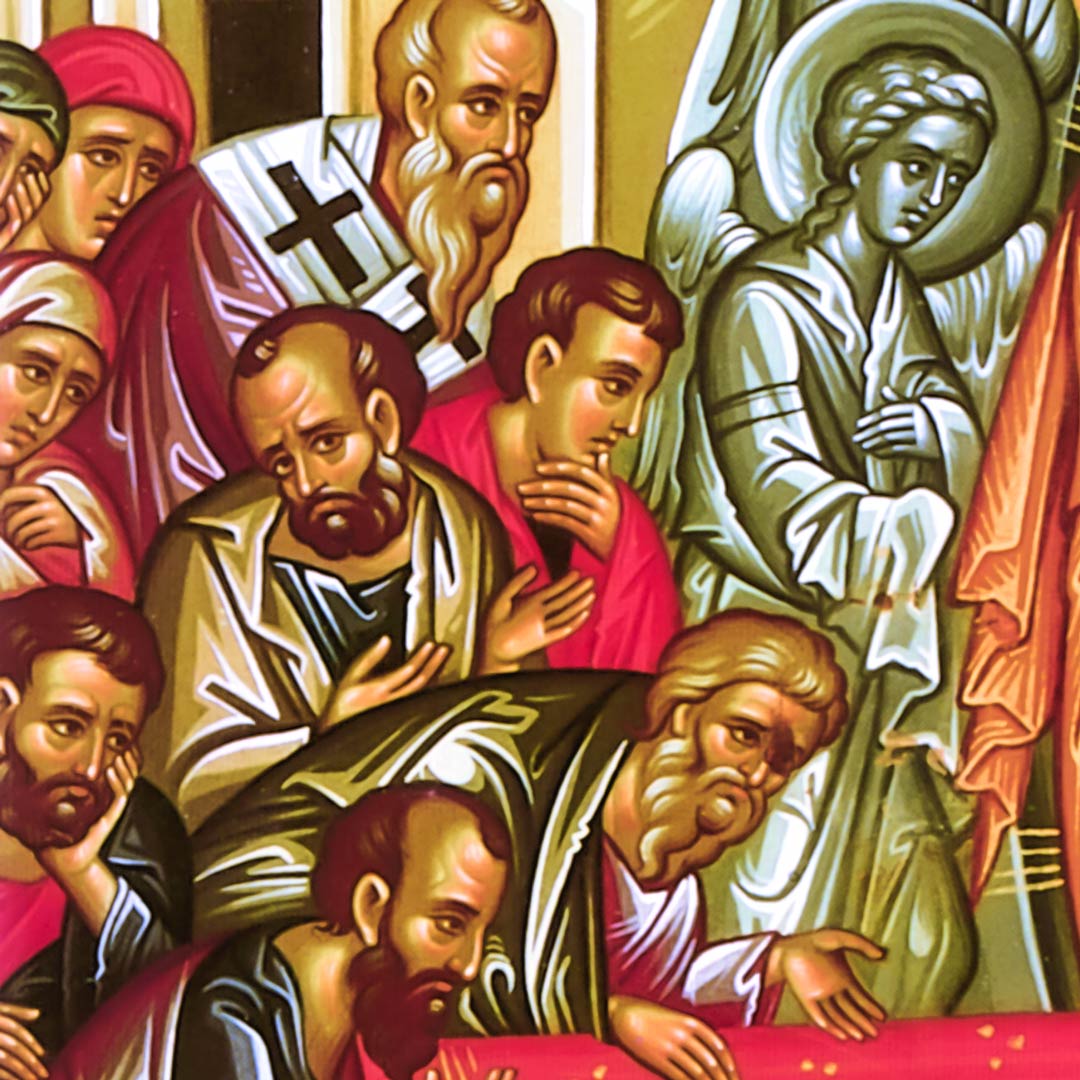 Together with the Apostles are several bishops and women. The bishops traditionally represented are James, the brother of the Lord, Timothy, Heirotheus, and Dionysius the Areopagite. They are shown wearing episcopal vestments. The women are members of the church in Jerusalem.

In front of the bed of the Theotokos is a candle that helps to form a central axis in the icon. Above the candle is the body of the Theotokos and Ever-Virgin Mary. Standing over His mother is Christ holding her most pure soul. Above Christ the gates of heaven stand open, ready to receive the Mother of God. 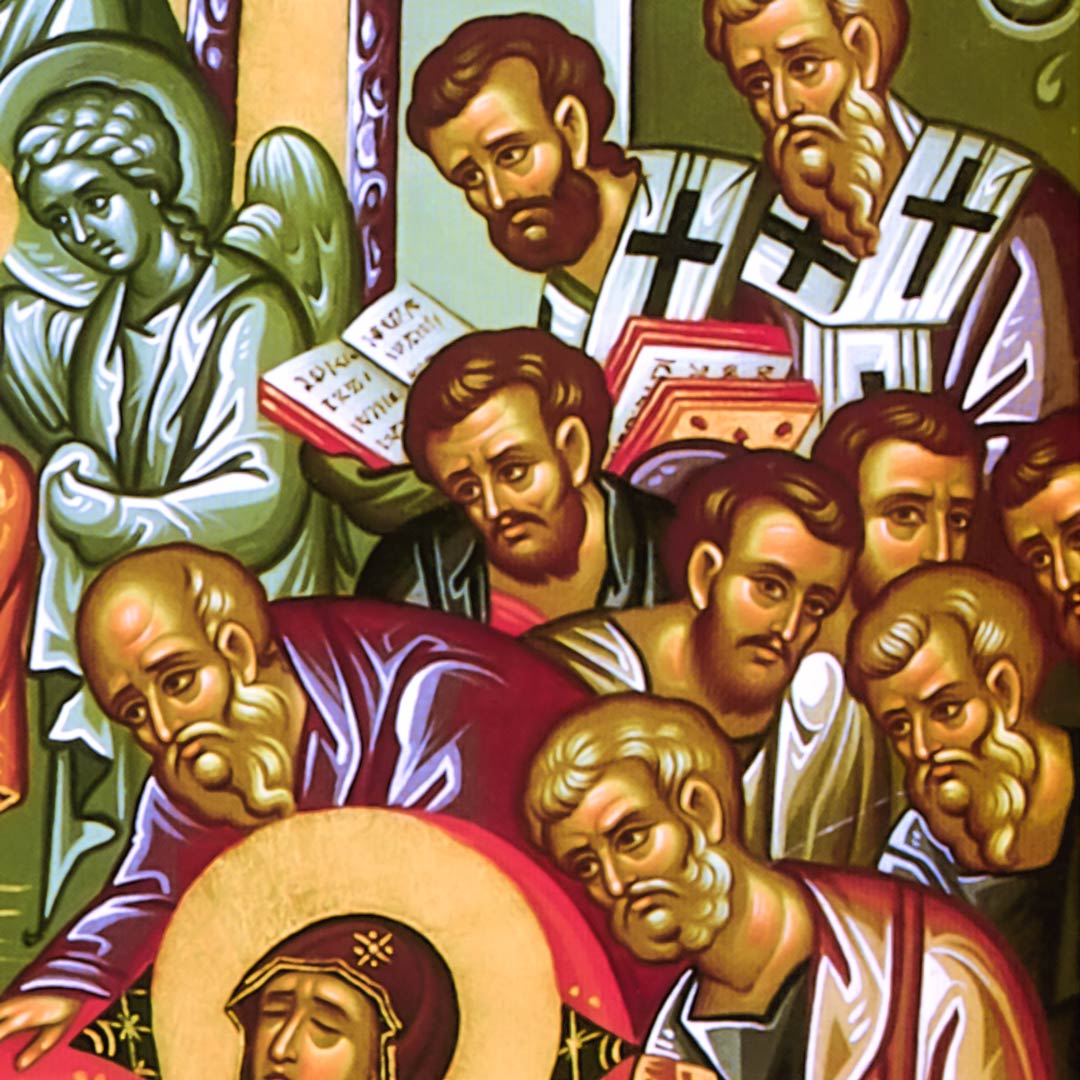 This great Feast of the Church and the icon celebrates a fundamental teaching of our faith—the Resurrection of the body. In the case of the Theotokos, this has been accomplished by the divine will of God. Thus, this Feast is a feast of hope, hope in Resurrection and life eternal. Like those who gathered around the body of the Virgin Mary, we gather around our departed loved ones and commend their souls into the hands of Christ. As we remember those who have reposed in the faith before us and have passed on into the communion of the Saints, we prepare ourselves to one day be received into the new life of the age to come.

We also affirm through this Feast as we journey toward our heavenly abode that the Mother of God intercedes for us. Through Christ she has become the mother of all of the children of God, embracing us with divine love.

Orthodox Christian Celebration of the Feast of the Dormition

The commemoration of the Dormition of the Theotokos and the preparation for the Feast begin on August 1 with a period of fasting. A strict fast is followed on most of the days (no meat, dairy, oil, or wine), with the exceptions of fish on the Feast of the Transfiguration (August 6) and the day of the Dormition. Oil and Wine are allowed on Saturdays and Sundays.

On the weekdays before the Feast, Paraklesis services are held in most parishes. These consist of the Great Paraklesis and the Small Paraklesis, both services of supplication and prayer for the intercessions of the Theotokos.

Icon of the Dormition of the Theotokos used in the Biblical Story section provided by Athanasios Clark and used with permission.

Icon of the Dormition of the Theotokos used in the Icon of the Feast section provided by Theologic and used with permission.

Listen to the Hymns of the Feast of the Dormition

Apolytikion (First Tone)
In birth, you preserved your virginity; in death, you did not abandon the world, O Theotokos. As mother of life, you departed to the source of life, delivering our souls from death by your intercessions.

Kontakion (Second Tone)
Neither the grave nor death could contain the Theotokos, the unshakable hope, ever vigilant in intercession and protection. As Mother of life, He who dwelt in the ever-virginal womb transposed her to life. 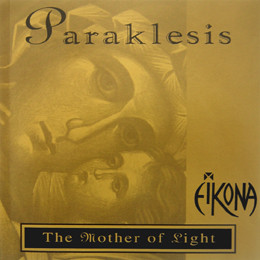 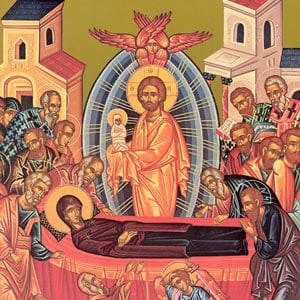 Feast of the Dormition of our Most Holy Lady, The Theotokos and Ever-Virgin Mary