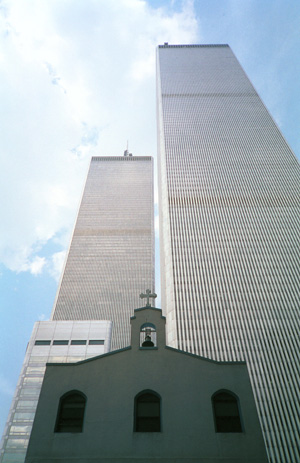 St. Nicholas as it stood next to the Twin Towers before 9/11
Press Office/Stavros Papagermanos

New York – On the occasion of the 9th Anniversary of the events of September 11, 2001, Archbishop Demetrios of America will officiate at the annual Memorial Service to honor the memory of all victims and heroes who perished on that day. A prayer will also be offered focused on St. Nicholas Greek Orthodox Church, the only house of worship destroyed on September 11, which was crushed by the debris of the South Tower when it collapsed.

The Memorial Service, organized by the community of St. Nicholas Church, will be held on Saturday, September 11, 2010 beginning at 4:00 p.m. Those interested in attending must meet at Gate 3B, at the corner of Greenwich and Liberty Streets across from the Fire House, between 3:30 and 3:45 p.m. Space is limited.