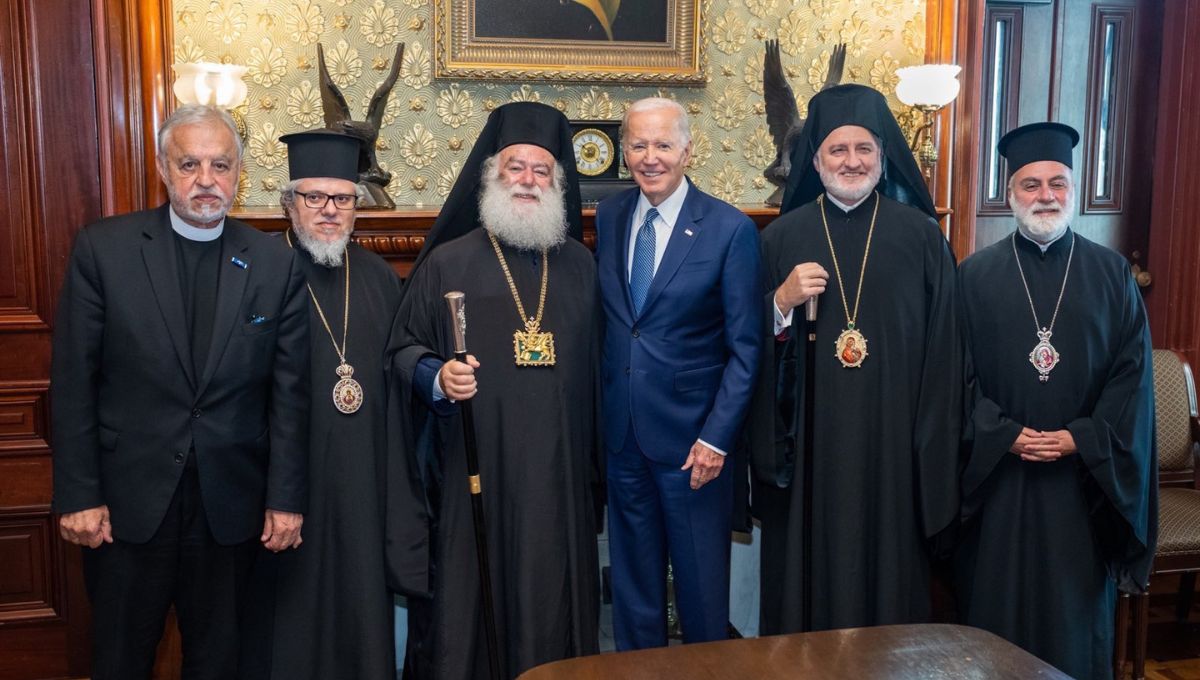 Washington, DC - His Beatitude Patriarch Theodoros II of Alexandria and All Africa, together with His Eminence Archbishop Elpidophoros of America, met today at the White House with Mr. Steven J. Ricchetti, Counselor to President Biden, and members of his staff. His Beatitude had the opportunity to brief them on the Patriarchate’s work in Africa, as well as the concerning developments in the Moscow Patriarchate’s uncanonical intrusion into the ecclesiastical jurisdiction of the Alexandrian Patriarchate.

The meeting was later joined by President Joe Biden. His Beatitude presented him with the Grand Cross (Μegalostavros) of the Apostle Mark, thanking him for the US’s ongoing support of the Patriarchate of Alexandria, as well as of Greece and of Cyprus.

Speaking to the press afterward, Patriarch Theodoros expressed his gratitude for the opportunity to meet with President Biden on his first Apostolic Visit to the United States, calling him “a man of faith.” “I had the opportunity to discuss not only the invasion of Ukraine, but the ‘invasion’ by another Church of my own Patriarchate,” His Beatitude said.

“President Biden is very sensitive on matters of freedom of religion,” Archbishop Elpidophoros said. He echoed the Patriarch’s confidence in the United States’ ability to address the unfolding events in the Alexandrian Patriarchate: “The United States is a bulwark for religious freedom and democracy, and it supports these values around the globe, whether in Ukraine or in Africa.”

His Beatitude thanked Ecumenical Patriarch Bartholomew for his blessing of the trip and unwavering love for the Patriarchate of Alexandria. “During my trip in the United States, Ι had the opportunity to meet the Hellenic Diaspora of America for the first time and talk with them about ‘the Continent of the Future’: Africa,” His Beatitude said, thanking Archbishop Elpidophoros for his support and hospitality.

Present at the White House meeting was Rev. Alex Karloutsos, Protopresbyter of the Ecumenical Throne. Their Eminences Metropolitans George of Guinea and Nikodimos of Memphis joined His Beatitude at the State Department.