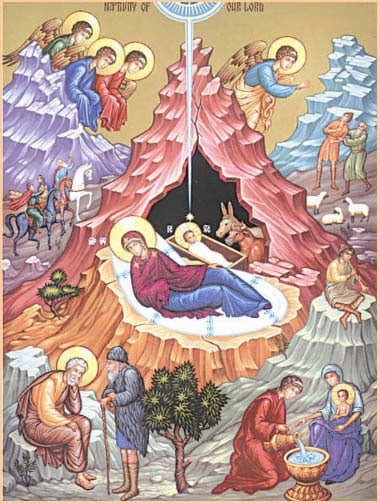 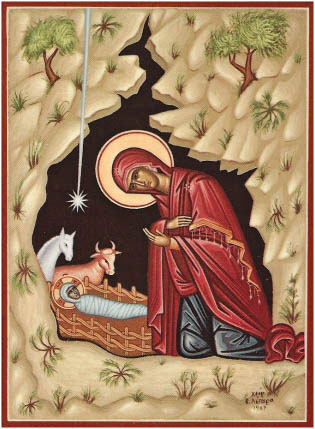 "Thus the icon is also a theology, a theology in color, expressing the experience of God with lines and paints rather than with discursive language. The goal of the icon and that of written theology are the same – to lead others to the mystical experience of God. The icon artistically depicts the experience so that others may approach the mystery and be invited to share in it."  - Anton Vrame, The Educating Icon

All this took place to fulfill what the Lord had spoken by the prophet:
“Behold, a virgin shall conceive and bear a son,
and his name shall be called Emmanuel”
The Prophecy of Isaiah in The Christmas Eothinon ~ Matthew 1:22 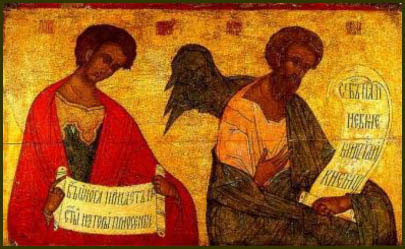 What is a Prophet?

The Prophets of the Old Testament were individuals chosen by God to tell people about the Salvation that was to come through Jesus Christ. Prophets not only told about events to come, but also delivered the message of God and His will to the People. 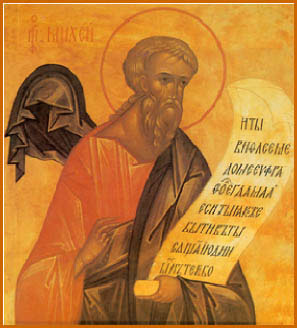 The Prophet Micah lived in Judah from 750 to 687 BC. He Prophesied that the Messiah would be born in in the City of Bethlehem, the location of the Nativity.

"But you, Bethlehem Ephrathah, though you are small among the clans of Judah, out of you will come for me one who will be ruler over Israel, whose origins are from of old, from ancient times." (Micah 5:2) 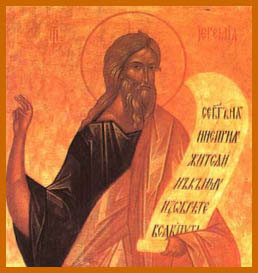 "The days are coming," declares the LORD, "when I will raise up to David a righteous Branch, a King who will reign wisely and do what is just and right in the land. In his days Judah will be saved and Israel will live in safety. This is the name by which he will be called: The LORD Our Righteousness. (Jeremiah 23:5--6) 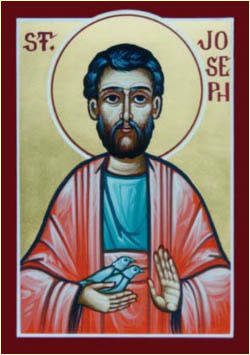 “Joseph went up from Galilee, out of the city of Nazareth, into Judea, unto the city of David, which is called Bethlehem; (because he was of the house and lineage of David) to be taxed with Mary his espoused wife, being great with child.” (Luke 2:4-5)

Verily, Joseph the betrothed, saw clearly in his old age that the foresayings of the Prophets had been fulfilled openly; for he was given a strange earnest, receiving inspiration from the angels, who cried, Glory to God; for he hath bestowed peace on earth. (Troparion)

David in the Gospel of Matthew, Chapter 1 - The Genealogy of Jesus Christ

David Referenced by Gabriel in the Annunciation 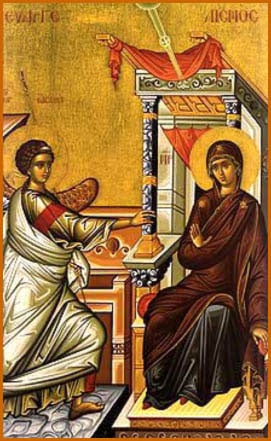 “Do not be afraid, Mary, for you have found favor with God. And behold, you will conceive in your womb and bring forth a Son, and shall call His name JESUS. He will be great, and will be called the Son of the Highest; and the Lord God will give Him the throne of His father David. And He will reign over the house of Jacob forever, and of His kingdom there will be no end.” Luke 1: 30-33 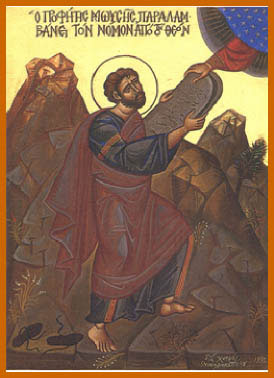 The Old Testament Book of Numbers is Attributed to the Prophet Moses and details the journey of the Israelites to the Promised Land.
~ A Star Will Come out of Bethlehem ~ Numbers 24:17

Philip found Nathaniel and said to him, “We have found him of whom Moses in the law and also the prophets wrote, Jesus of Nazareth, the son of Joseph.” (John 1:45)

“A long ray from the star points directly to the cave. This ray connects the star with a part of the sphere which goes beyond the limits of the icon – a symbolic representation of the heavenly world. In this way the icon shows that the star is not only a cosmic phenomenon, but also a messenger from the world on high, bringing tidings of the birth of ‘the heavenly One upon earth’.” 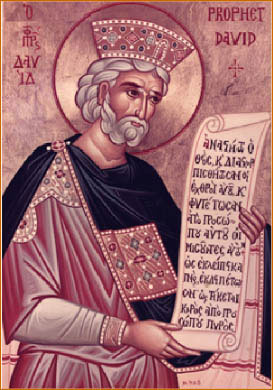 King David was a Prophet and wrote many of the Psalms which we find in the Old Testament, and read during most of our worship services. He prophesied that foreign kings would bring gifts to the Messiah.

In the adoration of the wise men the Church testifies that it accepts and sanctifies all human science leading towards it, provided that the relative light of the extra- Christian revelation brings those who serve it to the worship of the absolute light. It should be noted that the wise men are represented as being of different ages, which emphasizes the fact that revelation is given to men independently of their years and worldly experience. 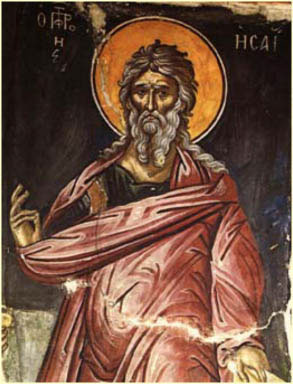 The Prophet Isaiah is often referred to as the fifth evangelist because so many of his prophesies pertain to the coming of the Messiah. He foretold that the Messiah would be born of a virgin.

“A virgin shall conceive and bear a son, and they shall call his name Emmanuel.” (Isaiah 7:14)

She is the highest thanksgiving to God, which man, from among all created beings, brings to the Creator. By this offering in the person of the Mother of God, fallen mankind gives assent to its salvation through the Incarnation of God. The icon of the Nativity graphically underlines this role of the Mother of God, singling her out from among the other figures by Her central position and at times by Her size.

“For unto us a Child is born, Unto us a Son is given; And the government will be upon His shoulder. And His name will be called Wonderful, Counselor, Mighty God, Everlasting Father, Prince of Peace.” (Isaiah 9:6)

Discussion - Additional insight into the Icon of the Nativity 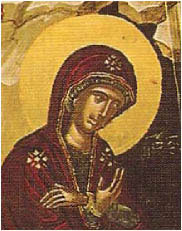 The stars on Mary’s garment denote her virginity before, during and after the Nativity.

The expression on her face is calm, gentle, meditative, showing that she gave birth to the child in a supernatural manner, free of all pain.

Isaiah’s Prophecy of the Animals 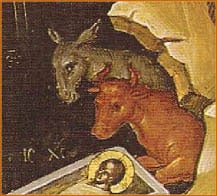 “The ox knows his master, and the donkey his master’s crib; but Israel does not know me, and the people have not regarded me.” (Isaiah 1:3)

By the presence of the animals, the icon reminds us of Isaiah’s prophecy and calls us to the knowledge and understanding of the mystery of the Divine Dispensation.

The Manger foreshadows the Tomb 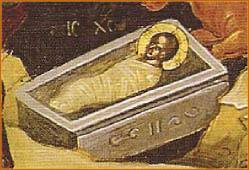 Cave, manger, swaddling clothes – are indications of the kenosis of the Godhead, His abasement, the utter humility of Him who, invisible in His nature, becomes visible in the flesh for man’s sake, is born in a cave, is wrapped in swaddling clothes, thus foreshadowing His death and burial, the sepulcher and the burial clothes.

The Troubling of Joseph by Satan 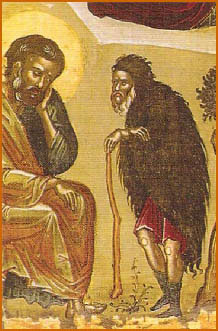 “...on the basis of tradition, the icon transmits the meaning of certain liturgical texts which speak of the doubts of Joseph and the troubled state of his soul.”

- Ouspensky & Losky, The Meaning of Icons

But Mary treasured up all these things and pondered them in her heart. (Luke 2:19)

The traditional Orthodox icon of the Nativity tells us what the Bible tells us, and does so in a very clear, vivid, effective manner, by means of forms and colors.

These resources explain the theology and symbolism depicted in icon of the Nativity of Christ. The materials can also be printed and handed out or used in a presentation in the following formats: 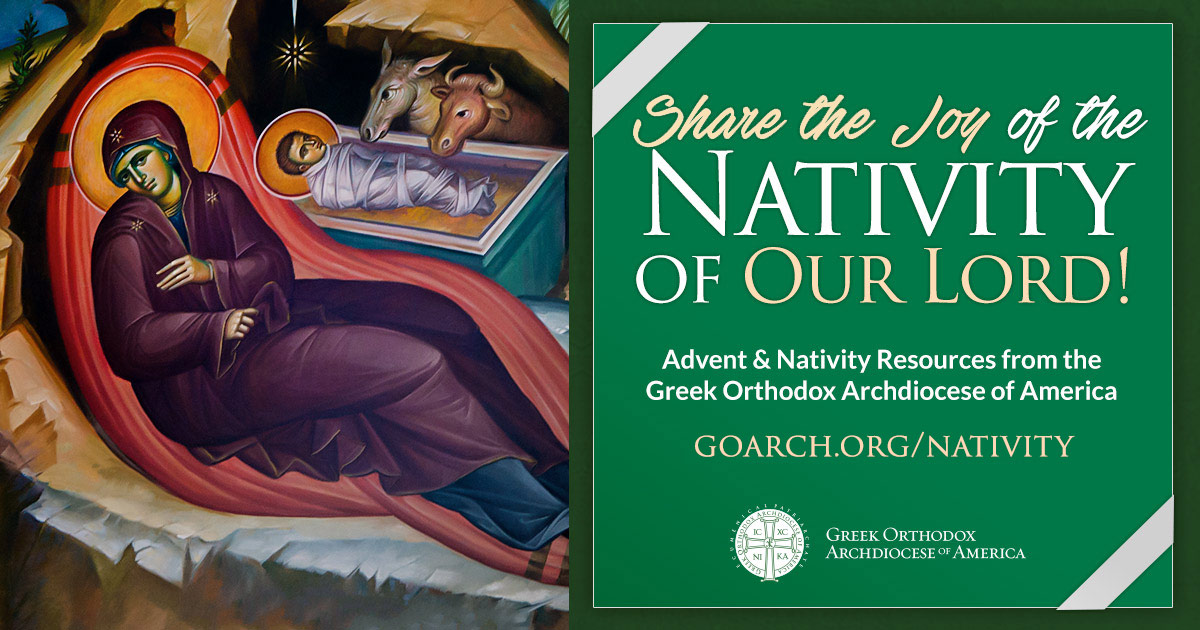