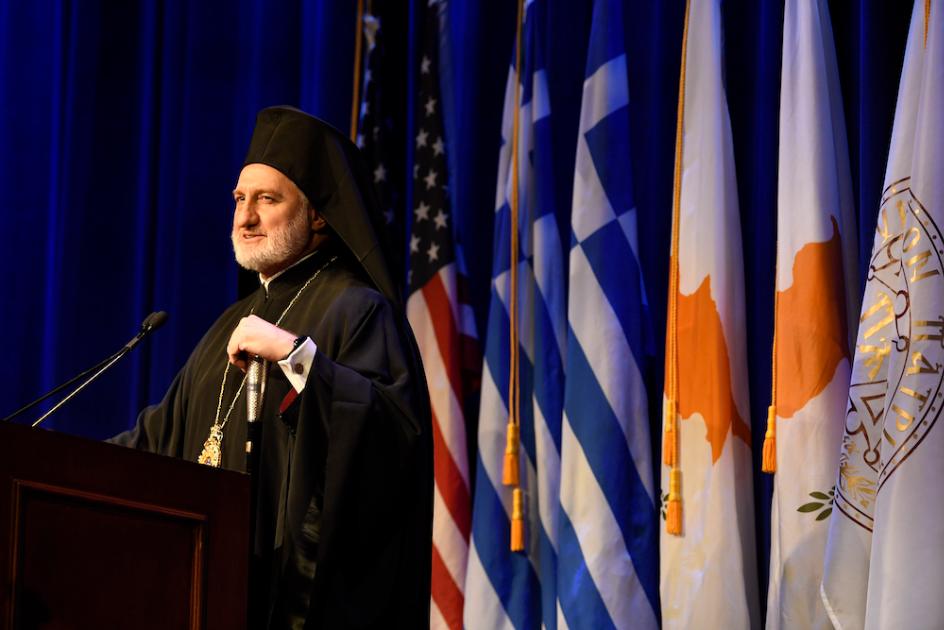 In his remarks, His Eminence Archbishop Elpidophoros of America said, “Some might say that the labor of this Centennial Clergy-Laity Congress has concluded. But I say to you that the endeavor has only just begun. We assembled in this Congress in a work of exploration: reflecting on the legacy of our past, engaging in renewal in our current moment, and forging even stronger bonds of unity for our future. As a community, we are as diverse as any other in the United States. We need to own this, and not allow it to own us.” (Full Opening and Closing Remarks)

The Finance Committee also announced that the Archdiocese had achieved financial stability, with revenues exceeding expenses from 2018 to 2021, and budgetary controls in place and operating. Cost controls and CARES Act funding allowed the Archdiocese to manage through the pandemic while delivering on its priorities. Moreover, a portion of the CARES Act funding of $2.4 million in 2020 was shared with the parishes while a portion of the $2 million of CARES Act funding in 2021 was shared with the Metropolises in response to the pandemic. The Archdiocese Covid-19 Relief Fund provided over $600,000 in financial assistance to 350 individuals and families, and $450,000 in parish relief was provided based on Metropolis assessment of need.

The Committee also reported a total of $1.1 million dollars raised by the Archdiocese as part of its 2021 Greek Fires Response, which, in collaboration with the IOCC, supports the immediate and long-term needs of those affected. The GOARCH Ukraine Relief Fund, also launched by Archbishop Elpidophoros in March 2022 in the wake of Russia's invasion of Ukraine has raised, in conjunction with the Philoptochos Society, $925,000 to date.

A Grand Banquet followed in the evening, with over 1200 delegates and guests in attendance to celebrate a fruitful Centennial Congress, which saw the long-awaited Consecration of the St. Nicholas Greek Orthodox Church and National Shrine, concurrent and historic national conventions for the Ladies Philoptochos Society and YAL, and a Special Plenary on the Charter of the Archdiocese.

Patriarchal Representatives, their Eminences Elder-Metropolitan Emmanuel of Chalcedon and Metropolitan Prodromos of Rethymnon and Avlopotamos; the Ambassador of Greece to the US, Her Excellency Alexandra Papadopoulou; the Vice-Chair of the Archdiocesan Council, John Catsimatidis; the National Philoptochos President, Arlene Siavelis Kehl; and the Congress Co-Chairs, Chrysanthy Demos and Nicholas Karacostas, offered remarks. Also among the speakers was former Governor of New York George Pataki, who was honored by Archbishop Elpidophoros for his support in the rebuilding of the St. Nicholas Shrine.
In his Keynote Address, the Archbishop also recognized as Centennial Honorees the Vice-Chairs of the Archdiocesan Council, John Catsimatidis, George Tsandikos, Demetrios Moschos, and the late Michael Jaharis, the longtime General Counsel of the Archdiocese, the late Emanuel Demos, the Centennial Congress Co-Chairs and their spouses, Chrysanthy and George Demos and Nicholas and Anna Karacostas, and four “intrepid workers” of the Archdiocese, Marissa Costidis, Maria Andriotis, Jamil Samara, and Theo Nicolakis.

A Centennial honoree is a person who has contributed significantly to the life of the Archdiocese; who has served with distinction and on the front lines; who has given true stewardship of time, talent, and treasure to the Archdiocese; and who is the true Icon of a faithful member of the Greek Orthodox Archdiocese of America.

The $925,000 raised for the GOARCH Ukraine Relief Fund were done so in conjunction with the Greek Orthodox Ladies Philoptochos Society, which raised $275,000 of the total funds.