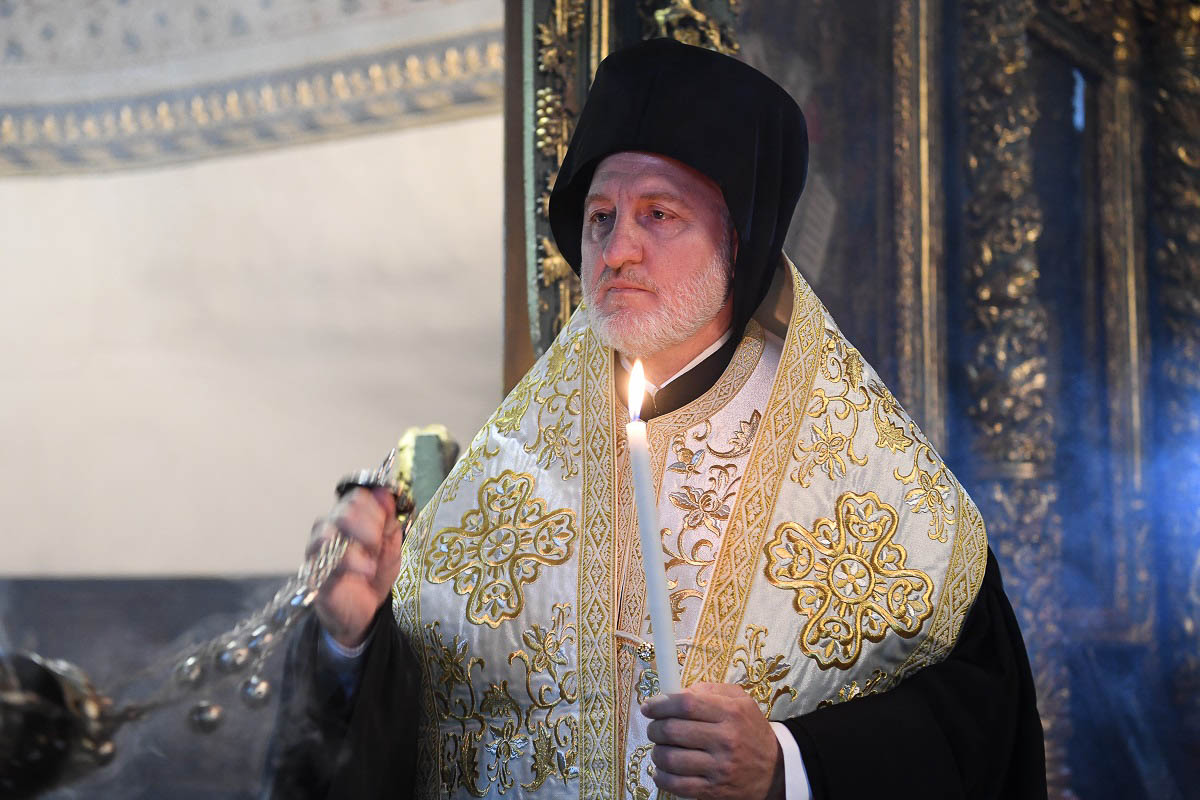 NEW YORK – Following the unanimous election of Metropolitan Elpidophoros of Bursa as Archbishop of America, His Eminence was presented with the Announcement of his election (Mikro Minima) and the Formal Election Announcement (Mega Minima) at the Sacred and Patriarchal Church of Saint George. After the ceremony he received the good wishes and blessings of His All-Holiness Ecumenical Patriarch Bartholomew and the Mother Church upon the assumption of his new duties.

The following announcement in Greek has been released from the Ecumenical Patriarchate:

In the presence of the Ecumenical Patriarch and the Members of the Holy and Sacred Synod, the new Archbishop of America, Elpidophoros, appeared today, May 11th at noon, to accept his election by way of the Lesser Minima.

The Ecumenical Patriarch addressed the new Archbishop of America:

“All of us know that the Great Church of Christ, as a true Mother, embraces with affection and care all her spiritual children throughout the world, where they live, work, and excel. Thus, in regard to the great Eparchy of the Throne in America, we, and the Hierarchs of the Holy Synod, have been concerned and have numerous times discussed at length its problems during the last sessions of the Synod, seeking ways to improve the situation and restore the Holy Archdiocese of America to its former glory. And now, since its primate, Archbishop Demetrios, has submitted his resignation, due to the urgency of the situation, we sought to find a worthy successor who would be able to bring back good order to the life and function of the Archdiocese, inspire confidence in the flock of the Archdiocese to the Church, strengthen the bonds of the flock with our Holy Patriarchate, and make the Patriarchate proud again of its greatest Eparchy, which today is in need and is suffering.

“To this end, Most Reverend Archbishop of America, we are looking to your love as a young and dynamic Hierarch. For you are, well educated, a man of languages, active and efficient, dedicated to Mother Church, in whose bosom you grew up and where you were schooled in the things of the Church, and initiated into the mystery of the Church. We  look to entrust upon you this great and difficult task, with the certainty that you will succeed, that you will honor the vote and confidence of the Hierarchs of the Holy Synod and the expectations of your Patriarch, who embraces you with paternal affection and respects your values and devotion, which he was able to see in you during your lengthy ministry in this Holy Patriarchal Court under our command.”

Subsequently, His All Holiness emphasized that the new Archbishop knows the issues of America and even of Europe, and added:

“You are an academician, a teacher with zeal and knowledge, and you will be able to rebuild the Theological School of Holy Cross, which is going through difficult times, and also collaborate with American Universities for the promotion of our historical learning and our cultural inheritance.

We expect from you to strengthen the holy bonds of your Archdiocese with the Center of our ecclesiastical foundation, to organize pilgrimages here from time to time, as your predecessor Iakovos of blessed memory used to do, to come back here often to keep us informed, be re-baptized in our springs of spirituality, and collaborate with the competent Synodical Committee for problems you may encounter there from time to time.

You will cultivate good brotherly relationships with our heterodox brothers – for you have been involved in the ecumenical movement for a long time – but also with other faiths, with Muslims and Jews, with whom the Ecumenical Patriarchate has been in academic dialogue for many years. Your experience and knowledge of Islamic societies and their culture will be especially useful.

Brother Archbishop of America, you have many, too many things to do and offer. And you can! We trust you and send you off with good hopes and expectations. You must glorify the Throne of your Eparchy, but also this Holiest and Martyred Throne, which raised you, nurtured you, and honors you today in an exceptional way.

May you excel as an Archbishop of love, of peace, of humility and of unity. Axios!

In his response, the new Archbishop of America expressed to the Ecumenical Patriarch and to the Members of the Holy and Sacred Synod his wholehearted gratitude for his election.

“Your All-Holiness and Master, I feel the great responsibility which Mother Church places upon my shoulders, beyond the great honor and confidence by which Your Holiest Person embraced me even today in the Synod. As Your spiritual child, as a newly-planted olive tree in the Patriarchal Court, as the least vine of the spreading grapevine of the Ecumenical Throne, and even as a simple sunflower, I shall ever have my eyes turned toward You, the August First of Orthodoxy, for only in this way shall I be able to bear fruit, for I know that only around Your Altar shall I yield a harvest, and cut off from this life-giving Vine of the Great Church, I shall risk being cut off and thrown into a fire of ingratitude and destruction.

“I promise, Your All-Holiness, at this holy and solemn moment, as also do the rest of the Archpastors of the Ecumenical Throne, that this great Eparchy of the Throne, the Holy Archdiocese of America and her Metropolises, shall be girt with the robe of ministry to Mother Church, the Omogeneia here, the apostolic work of the Eparchies of the Throne, and every other need of the Holy Center of Orthodoxy. Because we all know that if the vine brings fruit, it is on account of the vineyard, to which it is connected. If the olive tree is rich with fruit, it acquires this value because it is planted around the Holy Altar of the Phanar. When the sunflower blossoms and yields fruit, it is on account of the light of the Sun of Orthodoxy, the Ecumenical Throne. With these humble thoughts, in infinite gratitude I accept the position on today’s date on which we celebrate the inauguration of Constantinople. I thank God, the Giver of all creation, the Most Holy Theotokos Who guards this Holy City of the Lord and I thank Your Divine All-Holiness, my Sovereign and Master, because from my youth you shaped me, who was the least, with much patience, love, and skill, and benefitted me as no one else. I thank the Reverend Holy Hierarchs, the Members of the Holy and Sacred Synod, who honored me profusely with their honorable vote and confidence in my humble person.”

Afterwards, in the Patriarchal Church of Saint George, in the presence of the Synodical Hierarchs, the Patriarchal Court, and also other clergymen and lay pilgrims, the new Archbishop of America celebrated the Service of the Greater Minima, during which his election was announced in church, and he responded with the text of Thanksgiving for the election of his person by the Church, accepting the position in a state of emotion and gratitude.

After the completion of the Greater Minima, Archbishop Elpidophoros accepted the congratulatory wishes of all present.