Print Feast of the Holy Protomartyr and Archdeacon Stephen

After the pouring forth of the Holy Spirit at Pentecost, the fire-bearing words of the Apostles and the signs and wonders that accompanied them inspired many conversions.  As soon as the believers had become members of the Body of Christ through holy Baptism, they sold all their goods and laid the proceeds at the Apostles’ feed; then, being free of all worldly ties and interests, they led a life in common, and were of one heart and of one soul.  After fulfilling the customary observances in the Temple, they would meet in their homes to attend to the Apostles’ teaching, to offer praise to the Lord Jesus Christ and to share with gladness in the banquet of eternal life, the seal of their communion with God and of their love for one another-the holy Eucharist (Acts 2:42-47; 4:32-34). 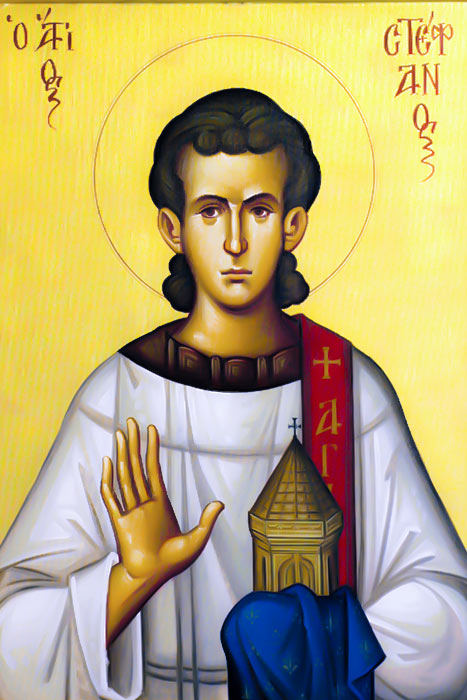 In order that the Twelve might devote themselves without distraction to prayer and to teaching as the number of disciples continued to increase, they decided to appoint seven of the brethren, who were well-respected for their wisdom and full of the Holy Spirit, to relieve them of the task of looking after the material welfare of the community, especially of waiting on the brethren when they ate together and of assisting the widows and the needy.  The seven deacons upon whom the Apostles laid their hands were Stephen, Philip, Prochorus, Nicanor, Timon, Parmenas, and Nicholas (Acts 6:1-6).  The activity of Stephen, who was their head, extended well beyond providing for the material needs of the community.  Being filled with the grace of the Holy Spirit, he worked miracles and spoke with the authority of a messenger from God.  All the people admired him to such an extent that their leaders, angry because they were incapable of answer his arguments, brought him before the Sanhendrin, the high priest’s council, and accused him falsely of blasphemy and of intending to subvert the ordinances of the law.

The young man stepped forward fearlessly to face his judges and, inspired by the spirit that Christ had promised to His disciples in such an event (Matthew 10:19), in ardent tones he reminded the stone-hearted Jews of the constant loving kindness and patience that God had always shown towards His people, giving the promise of His Covenant to the Patriarchs and never failing to come to the help of His elect.  By signs and wonders, mighty works and promises, and by the awesome revelations delivered to Moses at Sinai and in the wilderness, God was indefatigable in all that He did throughout the history of Israel to raise His chosen people above their attachment to created things and to deliver them from idolatry; but they ever resisted, and when the Righteous One, the Savior and Redeemer, the promise of the Patriarchs and the fulfillment of the prophecies came on earth, they showed the same uncircumcised heart, the same obstinate resistance to the ways of the Holy Spirit:  As your fathers did, so do you.  Which of the prophets did not your fathers persecute? And they killed those who announced beforehand the coming of the Righteous One, whom you have now betrayed and murdered (Acts 7:51-52).

These inspired words sprang from Stephen’s mouth through the grace of God, which filled his heart and made it heavenly, while also spreading over his body, and illumining his face with a divine light as it illumined the Savior on the day of the Transfiguration (Matthew 17:6; Luke 9:29).  All who sat gazing at him in the council saw him thus clothed in shining glory like an Angel (Acts 6:15) and they ground their teeth in hatred.  Their anger burst forth when Stephen, lifting his eyes to Heaven and beholding the glory of God, and Jesus standing at the Father’s right hand as clearly as when He shall come at the end of time, cried out: I see the heavens opened and the Son of man standing at the right hand of God (Acts 7:56).  Unable to bear this revelation of the exaltation to Heaven of Jesus Christ and of His dwelling bodily in the Blessed Trinity, the Jews stopped their ears and, rushing on Stephen, they took him out of the city and stoned him.

Stephen exulted with joy to be put to death after the example of his Master; and for him the stones they threw were so many steps up to the glorious vision of Christ which he had just caught sight of.  He breathed his last like Jesus on the Cross, calling upon the name of the Lord with the cry of supreme love for his enemies: Lord, do not hold this sin against them (Acts 7:60; c.f. Luke 23:34).

Adorning the Church with the costly pearls of his blood, Stephen was the first to take the path to Heaven that Christ opened by His Passion.  His voluntary death for the Truth opened Paradise to him and enabled him to see the glory of God.  His perfect love for God and for his neighbor, which extended to forgiving those who slew him, had placed him in the forefront of the friends of God.  Therefore the Martyr-loving faithful, who today contemplate the resplendent light of his countenance mingled with that of the star of Bethlehem, rely confidently on his intercession.

The body of Saint Stephen, which pious men had buried, was discovered by the priest Lucian at Caphargamala in 415, following an apparition.  It was translated to the church that the Empress Eudocia, the wife of Theodosius II, built in honor of the Protomartyr in Jerusalem.  Saint Stephen’s relics were later taken to Constantinople.

Orthodox Christian Celebration of the Feast of Saint Stephen

The feast and commemoration of Saint Stephen is celebrated with the Divine Liturgy of Saint John Chrysostom which is conducted on the morning of the feast and preceded by a Matins (Orthros) service.  A Great Vespers may be conducted on the evening before the day of the Feast.  There is no fast on this day no matter what day of the week, as the feast always occurs in the festal period between Holy Nativity (December 25) and the Eve of Holy Theophany (January 5).

Adapted from The Synaxarion: The Lives of the Saints of the Orthodox Church, Vol. 2, compiled by Hieromonk Makarios of Simonos Petra and translated from the French by Christopher Hookway (Chalkidike, Greece: Holy Convent of the Annunciation of Our Lady, 1999) pp. 565-568.

Icon of Saint Stephanos provided by Athanasios Clark and used with permission.