Print Feast of the Holy Great Martyr George the Trophy-Bearer 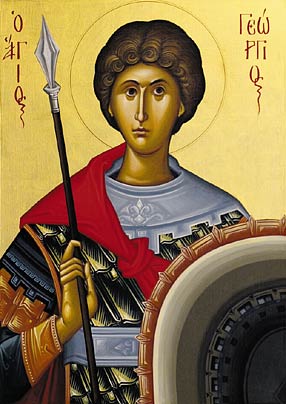 Icon of Saint George written by the hand of Athanasios Clark and used with permission. © Greek Orthodox Archdiocese of America

This great and wonderful athlete of Christ’s was the son of a wealthy and high-ranking Cappadocian family. George having lost his father at the age of ten, his mother Polychronia, who had become a Christian without her husband’s knowledge, returned to Palestine, her homeland, and brought up her son in the evangelical virtues. Handsome, intelligent and refined in manner, George embarked on a military career at the age of eighteen. He pleased his superiors and was quickly promoted to the rank of tribune in the imperial guard, and then, it would appear, to that of prefect.

Returning to Cappadocia after a victorious campaign and passing through the region of Attalia in Pamphylia, he freed the king’s daughter, who had been left at the mercy of a dangerous dragon, and killed the beast with a divine strength that he was given by his faith. Marvelling at this demonstration of the strength given by Christ to His faithful ones against the forces of evil, the local pagans were all converted to Christianity.

At the time of the Great Persecution unleashed by Diocletian (c. 304), when the Emperor had summoned all the Eastern governors to Nicomedia to make them privy to his decrees against the Christians, Saint George, sensing that the moment had come for him to make public confession of Christ, gave all his goods away to the poor, freed his slaves and went to court. He appeared in the midst of the assembly and reproached the sovereign for unjustly shedding the innocent blood of Christians. Diocletian in stupefaction ordered his second-in-command Magnentius to interrogate this insolent young man about his faith. George replied that it was because he believed in Christ the true God that he had come without fear to reproach them. Having recovered from his amazement, the Emperor, fearing a tumult among those present, offered to heap honors on the Saint on condition that he sacrifice to the gods of the Empire. George replied: “Your reign will become corrupt and will quickly disappear at no gain to you; but those who offer a sacrifice of praise to the King of Heaven will reign with Him for all eternity!” At the sovereign’s orders, the guards beat the Saint on the stomach with their lances. His blood flowed down but, at the first blows, their weapons became twisted as thought they were made of some soft material. Christ’s soldier was then thrown into prison with a heavy stone on his breast. The next day, he appeared once more before the tyrant and showed the same firmness. They therefore tied him to a wheel suspended over sharp instruments, so that, when the wheel was turned, the Saint’s body would gradually be cut to pieces. Overcoming the pain with his overflowing love for God, Saint George unceasingly gave thanks to God. A voice was then heard from heaven, saying: “Fear nothing, George; I am with you!” And a white clad angel more resplendent than the sun descended to loose him and heal his wounds.

When he appeared safe and sound before the Emperor, two officers of the guard, Anatolius and Protoleon, confessed Christ with loud voices. They were beheaded at once. The Empress Alexandra (April 21) also declared herself to be a Christian, but Magnentius constrained her to withdraw to the palace. They then threw the Saint into a ditch filled with quicklime; but, like the Three Young men in the Babylonian furnace, he emerged unharmed after three days, greeted by the crowd with the cry, “Great is George’s God!”

The Emperor, still remaining insensible before all these demonstrations of Christ’s power, ordered that the martyr be forced to walk in shoes studded with red-hot nails. “Run, George, towards the object of our desire!” said the Saint, invoking the Lord’s help. And once again he presented himself, whole and radiant with grace, before the tyrant.

By the grace of God, he also escaped a poison prepared by a sorcerer called Athanasius. When the latter and those of his sort were still incredulous and reckoned that George was using magical arts, he, at their request, raised a dead man who had been buried for three hundred years. The man prostrated before the Saint and, declaring that he had been wrested from hell at George’s prayers, he confessed Christ. The defeated sorcerer then fell at the feet of the servant of God and, in his turn, proclaimed the true Faith. Diocletian ordered that Athanasius and the resurrected man be beheaded without delay.

Not a few of those who had come to believe in Christ as a result of Saint George’s miracles found the means to visit him in prison, in order to be instructed in the truths of the Gospel or to receive the healing of their ills. The Saint had compassion on the sufferings of each of them, and even restored to life a bull belonging to a peasant called Glycerius, who was then arrested and beheaded without any sort of trial.

The next day, Diocletian had George appear in the Temple of Apollo before a fairly large crowd. Pretending that he intended to offer sacrifice, the Martyr went into the temple and confronted the idol, making the sign of the Cross. The demons that lived in the idol then confessed in terror that Christ alone is the true God, and they escaped with a great hubbub, leaving the inert statues to fall to the ground. The priests and the pagans then drove the Saint out with loud cries and took him back to the palace. Attracted by the tumult, Empress Alexandra came out and forced her way through the crowd, crying out: “God of George, come to my aid!,” and she fell at the Saint’s feet. Unable any longer to contain his fury, the tyrant, whose heart was hardened as Pharaoh’s had been of old, ordered that they both be beheaded. But, some time before the execution, Alexandra peacefully gave her soul into God’s hands in prison.

When the day arrived, Saint George went to the place of execution followed by a large crowd. He gave thanks to God for His benefits, and, begging His help for all those who would trustingly invoke his intercession throughout the centuries, bent his neck under the sword and went to carry off the trophies of eternal glory.

Carrying out the Saint’s desire, his servant took his precious relics back to his country, to Lydda (Diospolis) in Palestine, where innumerable miracles were worked in the great church that was built in his honor.

The veneration of Saint George enjoyed enormous popularity throughout the Christian world, both East and West. He was chosen to be the protector of countries like Georgia and England; thousands of churches have been dedicated to him and every Christian soul sees in him the incarnation of the virtues of valor, patience in affliction and trust in the help of grace that Christ, the Leader in battle, has enjoined on all the soldiers enrolled in His army of devotion.

Orthodox Christian Celebration of the Feast of Saint George

If the Feast of Saint George occurs during Great Lent or Holy Week, the feast is transposed to the Monday after Pascha, the Monday of Bright Week. This is done not only because the Divine Liturgy is not conducted on the weekdays of Lent, but also because many of the hymns of the Feast are Paschal in nature. This is due to the fact that under the Old Calendar, this feast never occurred before the annual celebration of Pascha.

Adapted from The Synaxarion: The Lives of the Saints of the Orthodox Church, Vol. 4, compiled by Hieromonk Makarios of Simonos Petra and translated from the French by Mother Maria Rule and Mother Joanna Burton (Chalkidike, Greece: Holy Convent of the Annunciation of Our Lady, 2003) pp. 494-499.