Print Feast of the Holy, Glorious, and All-Praiseworthy Chiefs of the Apostles, Peter and Paul 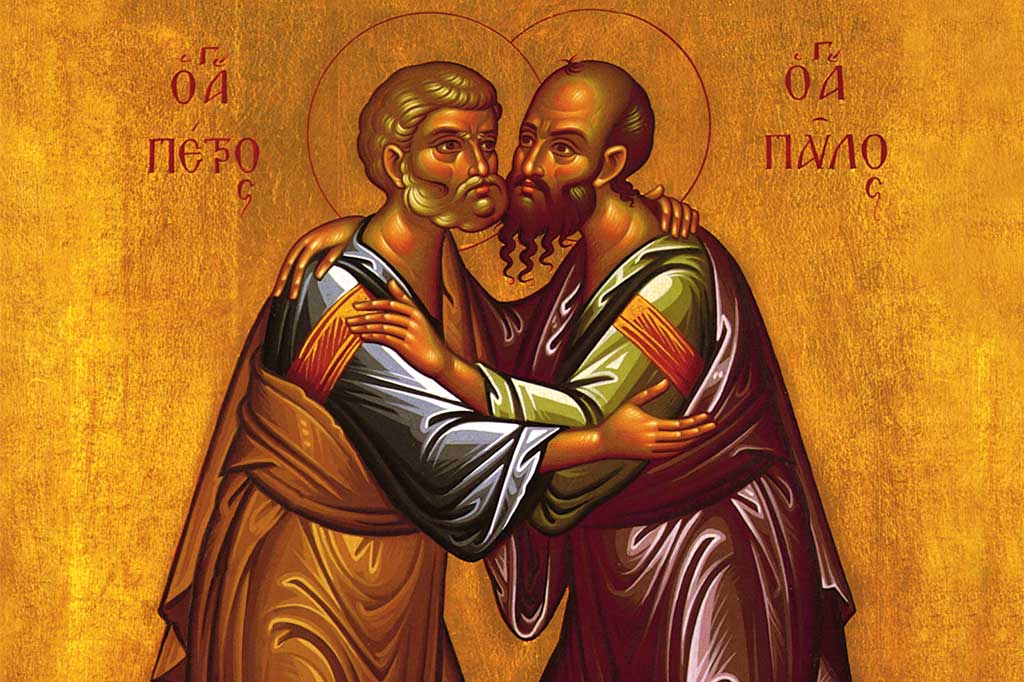 The divinely-blessed Peter was from Bethsaida of Galilee. He was the son of Jonas and the brother of Andrew the First-called. He was a fisherman by trade, unlearned and poor, and was called Simon; later he was renamed Peter by the Lord Jesus Christ Himself, Who looked at him and said, "Thou art Simon the son of Jonas; thou shalt be called Cephas (which is by interpretation, Peter)" (John 1:42).

On being raised by the Lord to the dignity of an Apostle and becoming inseparable from Him as His zealous disciple, he followed Him from the beginning of His preaching of salvation up until the very Passion, when, in the court of Caiaphas the high priest, he denied Him thrice because of his fear of the Jews and of the danger at hand. But again, after many bitter tears, he received complete forgiveness of his transgression.

After the Resurrection of Christ and the descent of the Holy Spirit, he preached in Judea, Antioch, and certain parts of Asia, and finally came to Rome, where he was crucified upside down by Nero, and thus he ascended to the eternal habitations about the year 66 or 68, leaving two Catholic (General) Epistles to the Church of Christ.

Paul, the chosen vessel of Christ, the glory of the Church, the Apostle of the Nations and teacher of the whole world, was a Jew by race, of the tribe of Benjamin, having Tarsus as his homeland. He was a Roman citizen, fluent in the Greek language, an expert in knowledge of the Law, a Pharisee, born of a Pharisee, and a disciple of Gamaliel, a Pharisee and notable teacher of the Law in Jerusalem. For this cause, from the beginning, Paul was a most fervent zealot for the traditions of the Jews and a great persecutor of the Church of Christ; at that time, his name was Saul (Acts 22:3-4).

In his great passion of rage and fury against the disciples of the Lord, he went to Damascus bearing letters of introduction from the high priest. His intention was to bring the disciples of Christ back to Jerusalem in bonds. As he was approaching Damascus, about midday there suddenly shone upon him a light from Heaven. Falling on the earth, he heard a voice saying to him, "Saul, Saul, why persecutest thou Me?" And he asked, "Who art Thou, Lord?" And the Lord said, "I am Jesus Whom thou persecutest; it is hard for thee to kick against the pricks." And that heavenly voice and brilliance made him tremble, and he was blinded for a time. He was led by the hand into the city, and on account of a divine revelation to the Apostle Ananias (see Oct. 1), he was baptized by him, and both his bodily and spiritual eyes were opened to the knowledge of the Sun of Righteousness.

And straightway- O wondrous transformation! - beyond all expectation, he spoke with boldness in the synagogues, proclaiming that "Christ is the Son of God" (Acts 9:1-21). As for his zeal in preaching the Gospel after these things had come to pass, as for his unabating labors and afflictions of diverse kinds, the wounds, the prisons, the bonds, the beatings, the stonings, the shipwrecks, the journeys, the perils on land, on sea, in cities, in wildernesses, the continual vigils, the daily fasting, the hunger, the thirst, the nakedness, and all those other things that he endured for the Name of Christ, and which he underwent before nations and kings and the Israelites, and above all, his care for all the churches, his fiery longing for the salvation of all, whereby he became all things to all men, that he might save them all if possible, and because of which, with his heart aflame, he continuously traveled throughout all parts, visiting them all, and like a bird of heaven flying from Asia and Europe, the West and East, neither staying nor abiding in any one place - all these things are related incident by incident in the Book of the Acts, and as he himself tells them in his Epistles.

His Epistles, being fourteen in number, are explained in 250 homilies by Saint John Chrysostom and make manifest the loftiness of his thoughts, the abundance of the revelations made to him, the wisdom given to him from God, wherewith he brings together in a wondrous manner the Old with the New Testaments, and expounds the mysteries thereof which had been concealed under types; he confirms the doctrines of the Faith, expounds the ethical teaching of the Gospel, and demonstrates with exactness the duties incumbent upon every rank, age, and order of man. In all these things his teaching proved to be a spiritual trumpet, and his speech was seen to be more radiant than the sun, and by these means he clearly sounded forth the word of truth and illumined the ends of the world. Having completed the work of his ministry, he likewise ended his life in martyrdom when he was beheaded in Rome during the reign of Nero, at the same time, some say, when Peter was crucified.

The Icon of the Holy Apostles Peter and Paul

The Orthodox Church has a beautiful presentation of the importance and prominence of the Apostles Peter and Paul with the icon that shows both Apostles standing together holding an image of the Church.

Both Apostles, being chosen by our Lord, were instrumental in the establishment and growth of the early Church through their boldness, spiritual strength, and wisdom. Thus they are recognized as "pillars" of the Church, having offered all even unto death for the sake of the Gospel of Christ.

In the icon, the Apostle Paul, the great missionary of the early Church, is holding a Gospel book, while the Apostle Peter offers a blessing with his right hand. At the top of the icon is the is a semicircle, representing the divine realm. Rays extend in the semicircle representing the blessings and presence of God upon His two chosen heralds of the True Faith.

The Feast and commemoration of the Apostles Peter and Paul is celebrated with the Divine Liturgy of Saint John Chrysostom which is conducted on the morning of the feast and preceded by a Matins (Orthros) service. A Great Vespers is conducted on the evening before the day of the Feast. Prior to this day, the Orthodox Church observes the Apostles' Fast, a period of fasting that begins on the Monday after the Sunday of All Saints. This Sunday is always one week after the Sunday of Pentecost, so the length of the Apostles' Fast varies from year to year depending on the date of Pascha.

First in prominence among the Apostles and teachers of the Universe, intercede to the Master of all for peace in the world and for our souls great mercy.

You have taken to Yourself, O Lord, the firm and God-proclaiming heralds, the chief Apostles, for the enjoyment of Your blessings and for repose; for You have accepted their labors and death as above all sacrifice, O You Who alone knows the secrets of our hearts.

Reading on the life of Saints Peter and Paul courtesy of Holy Transfiguration Monastery, Brookline, MA.

Icon of Saints Peter and Paul provided by Athanasios Clark and used with permission.