Print Feast of the Holy Apostle and Evangelist Luke 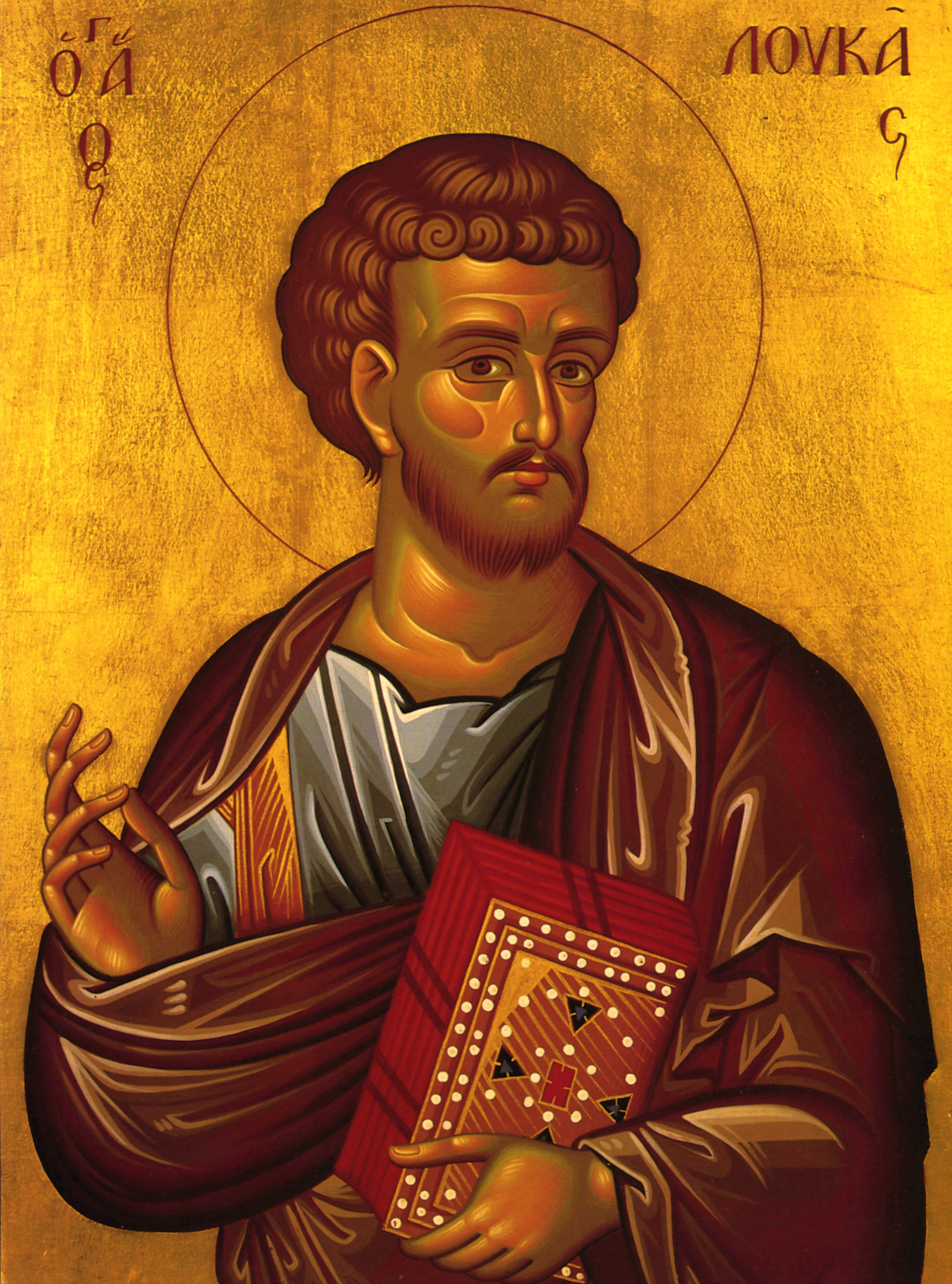 Icon of St. Luke the Evangelist provided by Theologic and used with permission. © Greek Orthodox Archdiocese of America

Saint Luke came from the city of Antioch, probably of a pagan family. From his youth he applied himself to seek after wisdom and to study the arts and sciences. He traveled all over the world to quench his thirst for knowledge, and had particular skill as a physician and in painting. The Gospel he wrote shows his excellent command of Greek; he also knew Hebrew and Aramaic.

There is a tradition that Luke was one of the Seventy Disciples that the Lord Jesus Christ sent before Him, two by two, to announce salvation in the towns and villages. Luke was in Jerusalem at the time of the life-giving Passion and, on Easter morning, walked with Cleopas (October 30) towards the village of Emmaus, distraught at the loss of the Master. But sadness was turned into unspeakable joy when Christ, whom they were unable to recognize when He joined them on the way, revealed to them in the breaking of bread that He was really and truly risen (Luke 24:35). After the descent of the Holy Spirit on the day of Pentecost, Luke remained for a time in Jerusalem where there were already disciples. Some say that on his way back to Antioch he stopped to preach the Good News at Sebaste in Samaria, where he obtained the relic of the right hand of the Holy Forerunner, which he took as a precious trophy to his own city. It was, therefore, at Antioch where he met Saint Paul in the course of his second missionary journey and accompanied him thence to proclaim salvation in Greece.

But another tradition says that Luke did not know the Lord during His earthly sojourn, and that he met Saint Paul while working as a physician at Thebes in Boeotia during the reign of Claudius (c. 42 AD). The Apostle’s fiery words convinced him of he Truth that he had vainly sought in the wisdom of this world for so many years. Without hesitation, he gave up all that he had and his profession in physical medicine to follow Paul and become the beloved physician (Colossians 4:14) of souls.

He went with the Apostle in his journeys from Troas to Philippi, where Paul left him to nurture the newly born Church. Luke remained in Macedonia for some years and, when Paul visited Philippi again during his third journey (AD 58), he sent him to Corinth to receive the collection made by the faithful there for the needs of the poor at Jerusalem. They went together to the Holy City, strengthening the Churches on their way. When Paul was arrested in Jerusalem and transferred to Caesarea, Luke remained with him. He accompanied Paul to Rome and describes their difficult and eventful voyage at the end of the Acts of the Apostles (chapters 27-28).

Luke wrote his Gospel and the Acts of the Apostles at Rome in obedience to Paul, dedicating the Acts to Theophilus, the Governor of Achaia, who was a convert. In his Gospel, Luke adds details which are not found in the first two evangelists: in telling of the Savior’s life, he especially stresses His mercy and compassion for sinful humanity that He has come to visit as a Physician (Luke 4:23; 5:31). And in the Acts, after telling of all that happened in the foundation of the Church at Jerusalem, he gives most attention to the work of his master, Saint Paul, who labored more abundantly than all the other Apostles in spreading the glad tidings of salvation.

After two years of imprisonment in Rome, Paul was released and immediately resumed his traveling ministry, followed by his faithful disciple Luke. But Nero launched his furious persecution of the Christians in Rome soon after, and Paul returned to the city at the risk of his life to strengthen the faithful there. He was arrested, put in chains, and held in far worse conditions than before. Luke remained steadfastly faithful to his master while others forsook him (Timothy 4:11), and he was probably present at Saint Paul’s martyrdom, although he left no written testimony to the fact.

After the glorious death of the Apostle of the Gentiles, Luke made his way back to Achaia, preaching the Gospel in Italy, Dalmatia and Macedonia. It is said that, in his old age, amid great tribulations, he also evangelized the idolaters in Egypt. He is supposed to have gone as far as the remote Thebaid and to have consecrated Saint Abile, the second Bishop of Alexandria.

On his return to Greece, Luke became Bishop of Thebes in Boeotia; he ordained priests and deacons, established churches and healed the sick in soul and body by his prayer. The idolaters arrested him there when he was eighty-four years old. They flayed him alive and crucified him on an olive tree. Many miracles were wrought afterwards by a miraculous myron trickling from his tomb, which was particularly effective in the cure of eye diseases for those who, in faith, anointed themselves with it.

It is the tradition of the Church that Saint Luke was the first iconographer and that he painted an image of the Holy Mother of God in her earthly lifetime. The All Holy Virgin praised this representation and said, “May the grace of Him who was born of me be upon this image.” Saint Luke afterwards painted other images of the All Holy Virgin and of the Apostles, giving rise in the Church to the devout and holy tradition of veneration of the icons of Christ and of His Saints. For this reason, Saint Luke is honored as the patron of iconographers.

Adapted from The Synaxarion: The Lives of the Saints of the Orthodox Church, Vol. 1, compiled by Hieromonk Makarios of Simonos Petra and translated from the French by Christopher Hookway (Chalkidike, Greece: Holy Convent of the Annunciation of Our Lady, 1998) pp. 412-415.

Orthodox Christian Celebration of the Feast of Saint Luke

O Holy Apostle and Evangelist Luke, intercede to our merciful God, that He may grant our souls forgiveness of sins.

As a disciple of the Word of God, with Paul you illuminated all the earth and dispelled the gloom in writing Christ's divine Gospel.