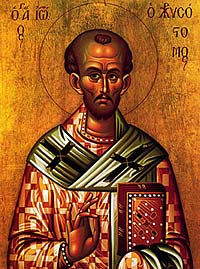 Ecumenical Patriarch Bartholomew and Pope John Paul have both emphasized reconciliation between the two churches, split since 1054. The return of the relics is a step towards such reconciliation.

vited in order for the two of them to represent the faithful of the Orthodox Church and the Roman Catholic Church in America in such an auspicious event for both Churches.

Accompanying His All Holiness when he returns the relics will be a delegation including His Eminence Walter Cardinal Kasper, President of the Pontifical Council for Christian Unity, and other Catholic hierarchs and officials. Because of his frail condition the Pope will not be able to attend. Upon their arrival, a Pan-Orthodox Ceremony will be held, and the relics will be enshrined in the Patriarchal Cathedral of St. George.

The relics of St. John Chrysostom and St. Gregory the Theologian were taken from Constantinople in 1204 by mercenary crusaders. They ended up in Rome where they have been kept in St. Peter's Basilica.

Both Saints were famed preachers, theologians and predecessors of Ecumenical Patriarch Bartholomew to the throne of Constantinople, St. Gregory from 379 to 381 and St. John from 398 to 404. St. John Chrysostom, meaning Golden Mouth, is considered by theologians to be the foremost orator and preacher for the Orthodox Church. Orthodox Christians worldwide follow his words as they participate in the Divine Liturgy of St. John Chrysostom. St. Gregory, an intellectual, theologian and religious leader, is known as the most eloquent voice in the Second Ecumenical Synod (Constantinople, A.D.381), which completed the Nicene Creed as we know it today.