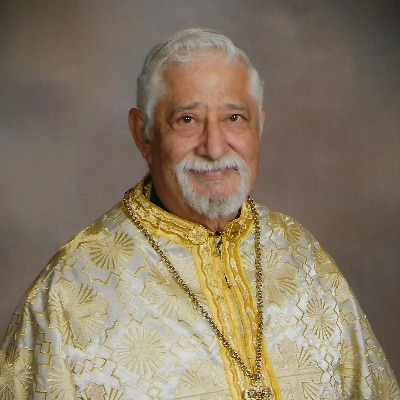 Ver. Rev. Archimandrite Demetrios Simeonidis (July 31, 1938), lovingly known as Father D., fell asleep in the Lord Sunday, February 14, 2021. He served the Holy Greek Orthodox Church faithfully for fifty-two years, becoming a guiding light, Spiritual Father, and dear friend to thousands of people he met throughout his ministry.  All who met Father Demetrios loved him. He was humble, kind, generous, and wise, and exemplified every day what it means to live a Christ-centered life.

Father Demetrios was raised in Hamilton, Ontario, where he felt his calling to the priesthood at an early age and left his home in 1957 to attend Holy Cross Greek Orthodox School of Theology in Brookline, Massachusetts.  After graduating in 1964, he headed west to serve at the Assumption Cathedral as Youth Director and Greek School teacher in Denver, Colorado. Shortly after beginning his ministry in Denver, he met and married Presbytera Olympia (Pappas) Simeonidis — who fell asleep in the Lord December 12, 2018.  Father Demetrios was ordained soon after their wedding in 1966.

His first parish assignment was at Holy Transfiguration Greek Orthodox Church in Sioux Falls, South Dakota.  Over the next fifty-two years, his ministry took him to Ogden Utah; Mobile, Alabama; Lorraine, Ohio; and North Royalton, Ohio —where he served for 24 years. Upon semi-retiring, Father and Presbytera moved to serve a small parish in Lecanto, Florida, and later he was assigned as the Liturgical Assistant to his son, Rev. Fr. Constantine, at Holy Trinity in Maitland, Florida.

Father Demetrios is survived by his three adoring children who feel so blessed to have been raised by such a loving dad: Rev. Protopresbyter Constantine Simeonidis (Presbytera Eleni) of Holy Trinity Greek Orthodox church in Maitland, Florida; Louis Simeonidis (Anna) of Corfu, Greece; and Carrie Klepzig of Pittsburgh, Pennsylvania. He is also survived by his five grandchildren: Aikaterini Flora, Dimitri Constantine, Olympia Violeta, Julianna Lillian, and Alexandra Grace. All of them loved him beyond measure and were so blessed to call him Papou (grandfather).

Those who knew him also appreciated Father’s wry humor. He was always quick with a joke, loved to laugh heartily, and enjoyed comedies. Lastly, they also knew that aside from the Church, his family, and his friends, Father was a passionate about sports, especially golf and Cleveland teams. Father spent the last decade enjoying a warm climate where he never missed a chance to hit the links. He was a faithful fan to the Cleveland Cavs even before LeBron was born, the Cleveland Indians and, of course, the Cleveland Browns. They will never find a more loyal and enthusiastic fan. The family is grateful to the Browns for finally having a winning season in 2020/21 — the last one he watched.

Father Demetrios served and helped establish many ministries during his active service. He helped found the Penelope House in Mobile, Alabama, which hosts a program for women fleeing domestic abuse; served on medical missions to Africa; and ministered to our youth at Ionian Village in Greece and Camp Nazareth in Mercer, Pennsylvania. Father also loved the prison ministry. He made a special place in his life and heart for it because he believed in loving unconditionally, giving second chances, and that everyone is an image of Christ. Father loved being involved with the youth of his parish. With children of his own, many GOYANs always filled the Simeonidis house with laughter and love. He officiated at their weddings and baptized most of their children over the years. He loved them and was as proud of their accomplishments as he was his own children’s.

In addition to his children and grandchildren, Father is survived by his brother Angelo Simeonidis; his sister Anthea Christenbury (Larry); his brothers-in-law Steve Pappas and Stanley Pappas (Victoria); his sisters-in-law Kiki Dadiotis, Kula Tsapakis (Manolie), Vangie Pappas, and Sondra Pappas; many nieces, nephews, cousins, Godchildren, and friends.  He is preceded in death by his beloved Presbytera Olympia; his parents Eleftheri and Aikaterini Simeonidis; his father and mother-in-law Deno J. and Fotini Pappas; his sisters-in-law Gene Simeonidis and Kim Pappas; his brothers-in-law John D. Pappas, Deno D. Pappas Jr., and Taki Dadiotis; and his nephews Phillip Simeonidis and Dr. Constantine D. Pappas.

A viewing will be held from 6 P.M to 7:45 P.M on Wednesday, February 17, 2021 with a Trisagion to immediately follow at 7:45 P.M at Holy Trinity Greek Orthodox Church, 1217 Trinity Woods Lane, Maitland, Florida. On Thursday, February 18, 2021 His Eminence Metropolitan Alexios of Atlanta will officiate Divine Liturgy at 9:00 A.M. with funeral services immediately following at 11 A.M- also at Holy Trinity. A private entombment will take place in Denver, Colorado.