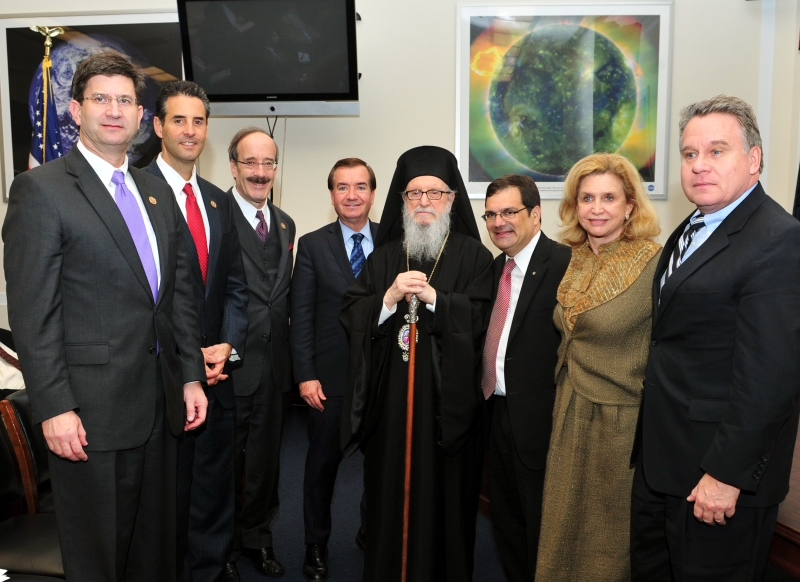 NEW YORK – With the initiative of Congressman Gus Biliakis (R-FL), a Congressional briefing on the suffering religious freedoms of the Ecumenical Patriarchate and the continued 42-year closure of the Halki Seminary was held yesterday, Nov. 20, at Capitol Hill. His Eminence Archbishop Demetrios of America was one of the three presenters.

“We raised and discussed the issue of Halki and the issue of religious freedom for the Ecumenical Patriarchate. It was an interesting meeting with prominent members of Congress. Many of them spoke very eloquently and passionately about the need to resolve this and have Halki re-open as soon as possible, and also create the possibility for the Ecumenical Patriarchate to function in freedom and continue its work for reconciliation and peace among people, ” said His Eminence, in a short statement following the briefing.

Congressman Gus Biliakis is reintroducing a resolution to the House of Representatives for the immediate re-opening of Halki without any delay or conditions. In his short statement to the Press following the briefing he said:

“It was very important to organize this briefing. This is of vital importance for the Patriarchate and we have to make sure we open Halki Seminary as soon as possible. We can go back for fifty years and we have been promised many times. We want action now, not words. I thought it was very important to sponsor this resolution to open up the theological school of Halki without any conditions. We will not rest until we open our Schole again. It is important to Orthodox Christians in the U.S. and around the world. This is a bipartisan bill and we are not going to rest until is done.”

The first presenter was Dr. Elizabeth Prodromou, an expert in the field of Religious Freedom and Southeastern Europe. She gave an overview on the Halki Seminary since its closure by the Turkish state in 1971. She explained all the efforts and arguments for re-opening Halki and the negative policy of Turkey, despite the clear and many calls by U.S. Presidents from President Carter to President Obama for Halki’s re-opening.

Professor Prodromou who served as vice chair of the US Commission on International Religious Freedom, 2004–2012 and is presently a member of the Secretary of State’s Religion and Foreign Policy Working Group, said the almost 43-year closure of Halki knowingly violates the human rights of the Ecumenical Patriarchate and is depriving the center of Orthodox Christianity of training priest and hierarchs and thus preventing unfettered succession and governance of the Ecumenical Patriarchate.

The second presenter was Dr. Anthony Limberakis, the national commander of the Order of St. Andrew, Archons of the Ecumenical Patriarchate. With a visual and spirited presentation, Dr. Limberakis explained for the policy makers the role of the Ecumenical Patriarchate in Orthodox Christianity, the work of the Archons for Halki and religious freedom. He informed those present of the upcoming Archon conference for Religious Freedom to take place in Berlin in early December. He also brought to the attention of the Congressmen the more recent efforts of Turkey for the islamization of orthodox churches in Turkey, which had been previously turned into museums and are lately converted into mosques.

Archbishop Demetrios spoke on a more personal level, apprising the congressmen of the many attempts made to open Halki, the commitment of orthodox faithful in the United States to this cause and of all the promises, hopes and disappointments that transpired in the last 15 years.

All the Congressmen who spoke expressed their absolute solidarity on the issue of Halki, which as they said, does not only curtails human rights and religious freedom but it is also closing the doors for future generations.