This article is from PRAXIS Volume 18 Issue 1: Digital Media

As you read this issue of PRAXIS, the Church remembers the seventieth anniversary of the election of Archbishop Athenagoras of North and South America as Ecumenical Patriarch.

On November 1, 1948, Athenagoras (Spyrou), then Archbishop of North and South America, was elected Ecumenical Patriarch. In January 1949, he flew in Air Force One to his new home in Constantinople to begin his ministry there.

As Archbishop of North and South America, he had distinguished himself as a leader of the Church during a turbulent time. When he became archbishop in 1930, the parishes in the archdiocese were divided over political issues in Greece (the Royalist-Venizelist issue), non-canonical bishops had been elected and people were struggling under the Great Depression. His enthronement signaled a new era. He worked to resolve financial, administrative and spiritual concerns of the Church at that time.

Archbishop Athenagoras established institutions and organizations in America that are with us today: the Ladies Philoptochos Society, Holy Cross Greek Orthodox School of Theology and Saint Basil Academy. He organized young people into the Greek Orthodox Youth (Ellenike Orthodoxe Neolaia) movement. He oversaw the purchase and move of the archdiocese headquarters from an old house in Astoria, Queens, to 10 East 79th street in Manhattan (8 East 79th Street would be purchased in the 1960s). And he solidified the archdiocese’s finances by establishing the monodollarion system of 1942, whereby each parish paid $1.00 per parishioner per year to the archdiocese so that it could support itself (that would be about $16.00 per parishioner today, according to the Bureau of Labor Statistics).

In the process, he unified and strengthened the archdiocese. Though met with opposition, Athenagoras worked tirelessly, traveling throughout the country to win over people and eliminate divisions. Before very long, he won the day. 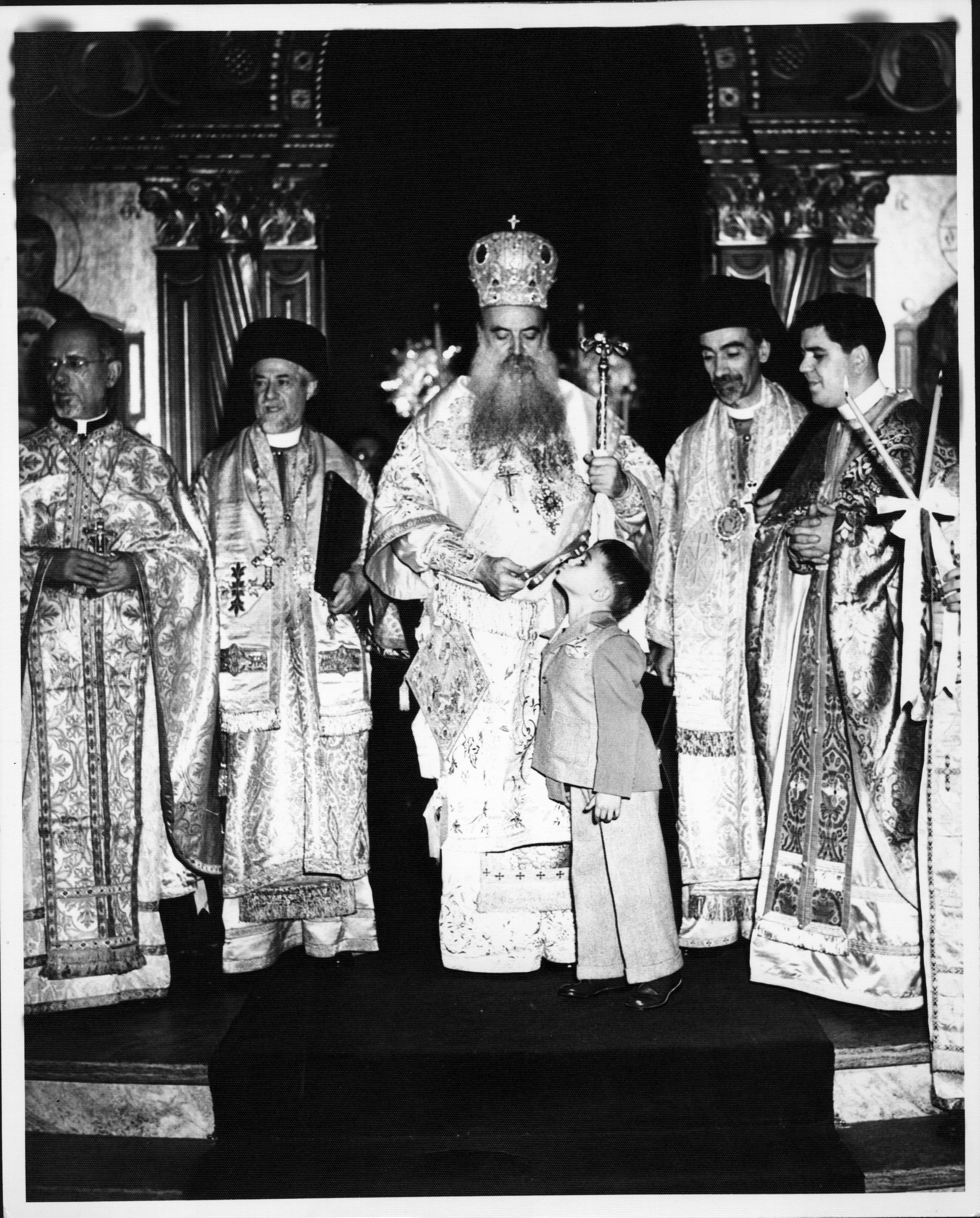 Athenagoras brought this energy into his ministry as Ecumenical Patriarch. As the Cold War commenced, the Patriarchate of Moscow was flexing its muscles, especially in the areas of Soviet domination, and the old concept of Moscow as the Third Rome was being resurrected. Responding to these challenges, Athenagoras called for the convocation of a pan- Orthodox Great and Holy Council in 1952. The first preconciliar meeting was held in 1961 in Rhodes. Additional meetings continued to be held over many decades. The council would finally be held in 2016 under the leadership of Ecumenical Patriarch Bartholomew.

One of the outcomes of the preonciliar meetings was the Orthodox agreement to adopt a common policy on relations with other Christian churches. By 1964, the Orthodox and Oriental Orthodox (Syrian, Coptic, Ethiopian and Armenian Orthodox Churches) were holding unofficial consultations on the divisions emanating from the Fourth Ecumenical Council (convened in 451 in Chalcedon). The two divided Churches came to see the same apostolic faith in one another, albeit in different terms.

While progress was being made within the Orthodox community, ecumenical dialogue was occurring throughout the world. With the establishment of the World Council of Churches in 1948, communions that had been divided for centuries were actually talking to one another. Athenagoras rose to meet the challenges, sending representatives to the general assemblies of the WCC.

When Pope John XXIII (elected in 1958) called for the convocation of an ecumenical council (to be known as Vatican II), the Orthodox, along with the rest of the world, were shocked: no one knew what to expect. Athenagoras responded by sending Archbishop Iakovos (then on his way to his enthronement as Primate of the Greek Orthodox Archdiocese of North and South America) to Rome to meet Pope John. March 1959 marked the first meeting between a representative of the Ecumenical Patriarchate and the pope of Rome since May 1547. In turn, a representative of the pope would meet Athenagoras in Constantinople one month later. While the Orthodox Churches did not send representatives to the 1963 session of the council, observers were present at the third (1964) and fourth (1965) sessions. The significance of these encounters should not be underestimated: the two churches had been separated since 1054. Then, in 1963, Pope Paul VI sent a handwritten letter to Patriarch Athenagoras. The last time any written communication had taken place between the leaders of the two churches was in 1584.

In December 1963, when Pope Paul VI announced his plans to visit the Holy Land, Athenagoras stated that it would be an act of divine providence if the heads of the Churches could meet in Jerusalem to pray together at the holy sites. The two church leaders met on January 5, 1964, on the Mount of Olives. The fiftieth anniversary of this meeting was celebrated in 2014 in Jerusalem by Ecumenical Patriarch Bartholomew and Pope Francis.

Following this historic 1964 meeting, letters between the pope and the patriarch continued to hail the importance of the meeting. However, the feeling at the time was that there had to be an end to the nine hundred-year-old state of schism before any dialogue could occur. Something had to be done about 1054. Over the next year, delegations from both sides studied the matter and concluded that the anathemas of 1054 were not acts excommunicating churches from one another, but individuals. The Orthodox decree of December 7, 1965, stated that these anathemas be removed “from memory and from the midst of the Church.” Pope Paul VI did the same in Rome.

Following this historic event, Athenagoras would live another seven years, falling asleep in the Lord on July 7, 1972. During the remaining years of his primacy, Pope Paul VI would visit the Phanar and Athenagoras would go to Rome in 1967. The exchange of letters and visits would continue and be extended to Popes John Paul II and Benedict XVI, Pope Francis and Patriarchs Demetrios and Bartholomew. The two churches would establish the Joint International Commission for Theological Dialogue Between the Roman Catholic Church and Orthodox Church. The Roman Catholic Church would return the relics of many saints to the Orthodox Churches. The first was the head of St. Andrew to the City of Patras in 1964. This practice continues to this day. Ecumenical Patriarch Bartholomew received the relics of Sts. John Chrysostom and Gregory the Theologian in 2004.

The legacy of Athenagoras, both as Archbishop of America and Ecumenical Patriarch, is still with us.

Rev. Anton C. Vrame, PhD, is director of the Department of Religious Education.