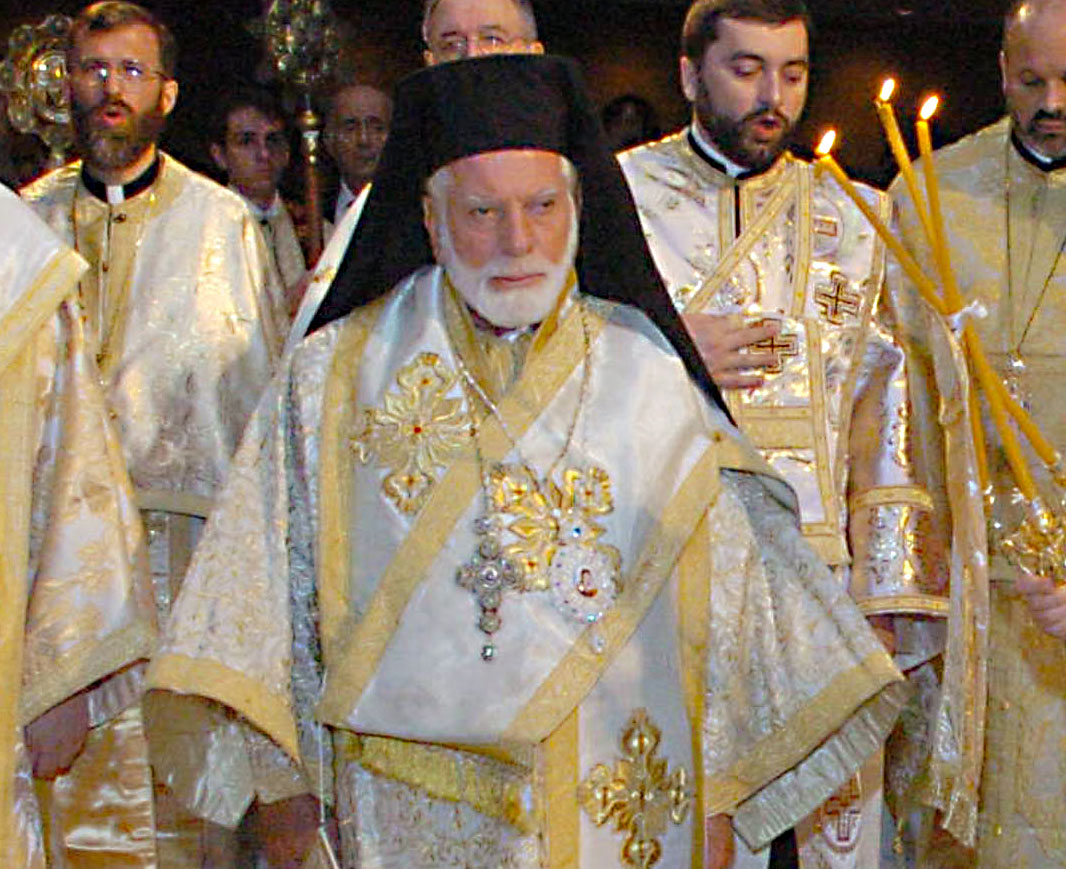 NEW YORK – The Greek Orthodox Archdiocese of America is mourning the passing of Metropolitan Iakovos of Chicago, 89, who fell asleep in the Lord last night, June 2, 2017, at Chicago’s Weiss Memorial Hospital following a short illness.

His Eminence Archbishop Demetrios of America with a heavy heart and deep sorrow made the first announcement late last night on behalf of the Hoy Eparchial Synod.

Immediately following the announcement of the passing of Metropolitan Iakovos, His Eminence Archbishop Demetrios of America stated:

“With the falling asleep in the Lord of the late Metropolitan Iakovos of Chicago, the Church in America has lost a prominent Hierarch, known for his great and long service to the people of God.

A long friendship connected me with the departed Hierarch since the time we were both students at the School of Theology of the University of Athens following World War II. Already at that time, the unforgettable hierarch distinguished himself for his deep piety, his ecclesiastical ethos and the special love he had for the sacred services of our Orthodox liturgical tradition.

Always noble in his ways, ready to listen to the problems, and the disappointments and the pain of countless people, he did not hesitate to offer plenty of time for therapeutic advice and spiritual guidance of his flock. Throughout his diakonia as Metropolitan of Chicago he was always untired and present without exception, in all the events of our Holy Archdiocese in all the meetings of the Holy Eparchial Synod and in the many Clergy-Laity Congresses.

I remember especially our common diakonia as members of the Holy and Sacred Synod of our Ecumenical Patriarchate because of his prudent, well-documented and constructive interventions during long synod meetings, something that was especially recognized by the President of the Synod His All-Holiness Ecumenical Patriarch Bartholomew.

Metropolitan Iakovos served with faithfulness and devotion to God and His Church until the very last days of his long life despite the increased health issues he was facing lately. The high hierarchical offering of the unforgettable departed Brother Metropolitan Iakovos has been indelibly engraved in the collective memory of the Holy Archdiocese of America, which is fervently praying for the blessed repose of the soul of such a beloved and distinguished Brother Hierarch. May his memory be eternal as he rests among the just and the saints.”

Metropolitan Iakovos of Chicago has served the Greek Orthodox Church in America for almost 50 years.

He was born in Athens in 1928 where he received his basic and high school education. He graduated from the Theological School of the University of Athens and was ordained to the diaconate and the holy priesthood. He served the church in Athens until 1954 and later pursued graduate studies in Boston, while at the same time serving as priest in the area.

He was appointed Archdiocesan Vicar of the 7th Archiepiscopal District of Detroit by Archbishop Iakovos in February 1968. One year later, in 1969, he was elected to the episcopacy by the Holy and Sacred Synod of the Ecumenical Patriarchate. He was consecrated Bishop of Apameia (an Auxiliary Bishop of Archbishop Iakovos) on Christmas Day of 1969, and appointed to the 7th Archiepiscopal District of Detroit as Bishop of that district.

In 1971 he was appointed President of Hellenic College Holy Cross School of Theology in Brookline, Massachusetts, while remaining as administrative overseer of the Diocese of Detroit. He simultaneously served as the Bishop of the New England/Boston area during his five-year tenure as President of Hellenic College and Holy Cross School of Theology.

Following the reorganization of the Archdiocesan Districts into Dioceses, Bishop Iakovos was enthroned by His Eminence Archbishop Iakovos of the Greek Orthodox Archdiocese of North and South America on May 1, 1979, as the Bishop of Chicago at the Annunciation Cathedral.

In November 1997, the Holy Synod of the Ecumenical Patriarchate elected His Grace Bishop Iakovos of Chicago to the active Metropolitanate of Krinis and Exarch of Ionias. In this capacity, His Eminence continued to serve the Greek Orthodox Diocese of Chicago as its Presiding Hierarch. In December of 2002, the Holy and Sacred Synod of the Ecumenical Patriarchate elevated the Dioceses of the Greek Orthodox Archdiocese to Metropolises of the Archdiocese and elected all of the Hierarchs of the Dioceses as Metropolitans of their respective Metropolises, thus Metropolitan Iakovos was elected Metropolitan of Chicago.

The Holy Metropolis of Chicago of the Greek Orthodox Archdiocese of America consists of 59 parishes in total, thirty-four parishes in Illinois, with another twenty-five parishes in Wisconsin, Minnesota, Iowa, northern Indiana, and eastern Missouri; as well as two monastic communities.

Under his leadership of Metropolitan Iakovos, the Metropolis has increased its efforts to assist the homeless and those in need, as witnessed in the labors of the Metropolis Philanthropy Committee.  He has founded new Youth programs, established various local Dialogue Commissions with other faith communities and worked with other area Religious Leaders in promoting justice and truth in our society.

Various other programs of the Metropolis established by the departed Metropolitan include the Bishop Iakovos Scholarship Assistance Program; the Bishop's Task-Force on AIDS; the Metropolis Jr. Olympics; the Festival of Orthodox Books; as well as numerous programs in religion and Greek education.

Archbishop Demetrios of America will preside at the funeral service for Metropolitan Iakovos, Fri. June 9, 2017 at 10:30 a.m. at the Greek Orthodox Cathedral of the Annunciation of the Virgin Mary in Chicago. The Divine Liturgy will precede the funeral.  The previous evening Thursday, June 8, the Archbishop will chant a Trisagion service in the Cathedral at 7:00 p.m.