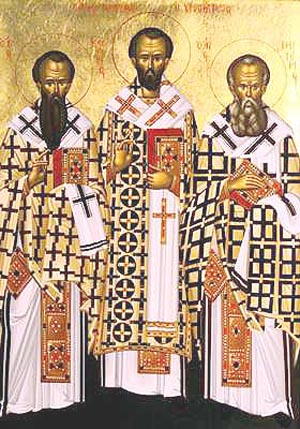 NEW YORK – The Greek Orthodox Archdiocese of America organizes a series of events in celebration of Greek Letters and the Feast Day of the Three Hierarchs, St. Basil the Great, St. Gregory the Theologian and St. John Chrysostom.

On Saturday, January 28, at 5:00 p.m. His Eminence Archbishop Demetrios of America will present the Three Hierarchs Awards of Excellence to the students who excelled in the Comprehensive Examination in Modern Greek in June 2011, during an auspicious Award Ceremony which will take place at the Holy Trinity Cathedral Center (337 East 74 Street) in Manhattan. New York State Assemblywoman, Mrs. Aravella Simotas, will be the main speaker of the event, which will also feature a musical performance by students of the “William Spyropoulos” Greek-American School of St. Nicholas, Flushing, under the direction of Areti Giovanou. The event is coordinated by the Direct Archdiocesan District Office of Education.

On Sunday, January 29, His Eminence Archbishop Demetrios will preside at the Divine Liturgy in the Greek Orthodox Church of the Three Hierarchs in Brooklyn, NY. Following the Liturgy the community will hold a tribute in honor of Greek Letters and their Patrons Holy Fathers of the Church. On this occasion, the Hellenic Heritage Award will be presented to Archon Peter J. Pappas.

On Monday, January 30, at 9:30 a.m. Archbishop Demetrios will officiate at the Divine Liturgy commemorating the Three Hierarchs and Holy Fathers of our Church at the Holy Trinity Cathedral (319 East 74 Street, NYC) for the students, teachers, and administrators of the New York City parochial day schools. In the Liturgy the Archbishop will address the students on the life and works of the Three Hierarchs and the importance of our Greek Orthodox heritage.

In the evening Jan. 30, beginning at 6:00 p.m. the Greek Orthodox Archdiocese will host a special event organized in conjunction with the exhibition Transition to Christianity: Art of Late Antiquity, 3rd-7th Century AD, at the Alexander S. Onassis Public Benefit Foundation (USA). The Event will include the viewing of the exhibition and a lecture by Dr. Demetrios Katos, Dean of Hellenic College, Brookline, Massachusetts. The topic will be “Transition to Christianity: The Three Hierarchs and the Adoption of Secular Education and Culture.” The program will also feature the Archdiocesan Byzantine Choir and will be held in the Olympic Towers Atrium, 645 Fifth Avenue, in Manhattan.