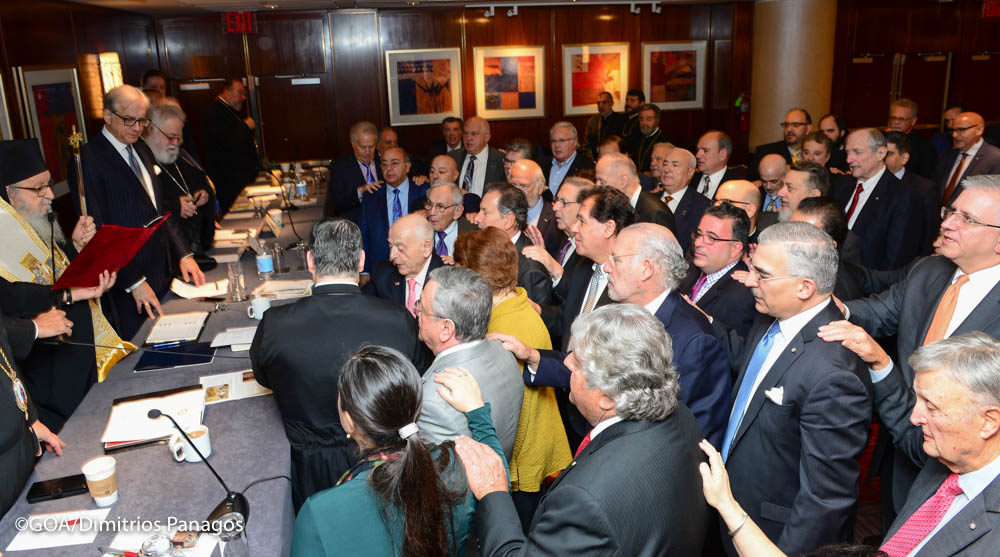 NEW YORK – The Archdiocesan Council of the Greek Orthodox Archdiocese of America convened for its first meeting of the 2018-2020 term, Thursday Oct. 18 and Friday, Oct. 19 at the New York Marriott Marquis Hotel.

As it is customary, the Standing Committees of the Council met on Thursday and the whole body convened on Friday, Oct 19, 2018. His Eminence Archbishop Demetrios of America presided at the meeting.

The Council ascertained that the Greek Orthodox Archdiocese of America has achieved financial stability, has fully restored all restricted accounts, has implemented appropriate financial controls, and the Finance Committee has proposed a balanced budget for 2019 which was approved by the Council.

It was reiterated in the Archdiocesan Council meeting, that according to the Phase II Report of the Special Investigative Committee for the rebuilding of St. Nicholas Greek Orthodox Church and National Shrine (released Oct. 17, 2018, see it online), “… after extensive investigation, there is no evidence that SNCNS funds were improperly paid to any individuals employed by or associated with the Archdiocese. The Phase II investigation also revealed no evidence or allegation that fraud was committed in connection with the SNCNS construction project.”

Additionally, the Archdiocesan Council adopted unanimously a motion “expressing the deep respect of the members to Ecumenical Patriarch Bartholomew and their full confidence in His Eminence Archbishop Demetrios of America, and the Metropolitans of the Archdiocese.”

His Eminence Archbishop Demetrios of America offered the morning prayer. In his opening remarks welcomed the members of the two governing bodies for the 2018-2020 term to the first meeting following the 44th Clergy Laity Congress held in Boston last July.

“I am conveying to you the abundant blessings and the love and appreciation of our Ecumenical Patriarch Bartholomew,” said the Archbishop and making everyone aware of the love and concern of the Patriarch said: “He is deeply appreciative of what our Church does here in America, as he is very conscious and aware of the very specific efforts that have been undertaken continuously on behalf of the Church in general and especially for the Ecumenical Patriarchate, of which we are a very integral part.”

His Eminence reported that compared with where we were a year ago “we are quite ahead and on firm and promising ground,” and for that we express firstly gratitude to God, because with His help we are able to turn around every and any adversity, he said, and reiterated the theme of the Clergy Laity Congress, “All things are possible to the one who believes in Christ.”

The Archbishop thanked by name all the Hierarchs, the priests, the parishes and all members of the previous Archdiocesan Council and the Executive Committee, all who worked very hard this past year and all those who made the 44th Clergy-Laity Congress a success.

Concluding his remarks, Archbishop Demetrios reminded everyone that we should “keep the Ecumenical Patriarchate in our prayers, especially these days that the Patriarchate is facing many challenges, in its mission and duties in the Phanar, and around the world.”

Following the roll-call the Archbishop administered the affirmation of office to all the members.

The Vice-President of the Archdiocesan Council George S. Tsandikos offered brief opening remarks expressing his gratitude for being elected as vice-president for a second term. He said “it has been a privilege to work side-by-side with the Archbishop,” and emphasized his “fierce and constant loyalty to this man of God, our Archbishop.” He also said that he felt very privileged to have worked harmoniously with the officers, the Chancellor, the CFO and the chairman of the Finance Committee in the past two years. “I stand before you with humility to tell you that albeit often painful we made many changes and overcome obstacles” and added that “we are looking forward to a new day with enormous hope and faith.” He recognized the members of the Executive Committee for their hard work, and also recognized the contributions of “our revered Metropolitans” for all their support and contributions in the last two years, especially Metropolitan Methodios of Boston for organizing a successful 44th Clergy Laity Congress. “Today is a new beginning. Let us unite as one body, let us serve our holy Archdiocese in America and further advance her mission. Let us work together to realize our dream and let us begin by completing Saint Nicholas National Shrine. It will be our legacy, our witness to the whole world that the Greek Orthodox Church in America is strong and vibrant. Let us work together to make this happen.”

Archon Theodore Bozonelis, National Secretary of the Order of St. Andrew, greeted the Council and said the Archons “are committed to the protection of the Ecumenical Patriarchate, and the Archdiocese of America and all of its parishes,” he said and presented a summary of the Order’s work for Religious Freedom.

Lou Kircos, chairman of the Finance Committee presented the extensive work done on the finances. He noted how different things are today and said that “all restricted accounts were restored, all amounts due were brought up to date and all due amounts to the pension plan were paid – if anyone had told me that a year ago I would not have believed it,” he said and added: “financial stability has been achieved quickly… St. Nicholas Church must be completed and must be completed and done quickly.” Mr. Kircos further reiterated “a deep commitment to HCHC” and advocated for the demonstration of our love to the Mother Church, the Ecumenical Patriarchate in a tangible way.

Elaine Allen, the newly appointed treasurer and former chair of the Audit Committee said that “what has happened over the last year is a modern day miracle,” emphasizing that in her extensive experience with non-profits “what happened and achieved in GOA is unprecedented.” She further stated that we have to make clear everywhere “there are no money missing and we have a balanced budget.”

Dimitrios Moschos of Worcester, Mass., former vice-president of the Council, suggesting several actions, reiterated the need of an aggressive campaign to inform the faithful and the public at large of the all the facts and the tremendous strides made towards financial stability.

Constantine Caras, chairman of the Administration Committee reported to the full body on the ongoing work of the Committee and the deliberations on administrative issues.

His Grace Bishop Andonios of Phasiane, Chancellor of the Archdiocese, spoke on Saint Nicholas Greek Orthodox Church and National Shrine, stating that the completion of St. Nicholas is a priority. His Grace reviewed the process of the audit for St Nicholas saying that “there was no fraud or misappropriation of money.” There was extensive discussion about the findings of the Phase II Report, the complexities of the design, the resulted cost overruns and the necessary steps forward to resume the construction as soon as possible. Bishop Andonios said that the Special Investigative Committee has recommended that the St. Nicholas rebuilding effort be spearheaded by a new legal entity, which will do the fund-raising and overseeing of the project, that may be affiliated with, but is independent from the Archdiocese, with separate bank accounts and an appropriately qualified board.  Incorporation documents for a new legal entity, the “Friends of St. Nicholas,” have been prepared and will soon be filed.  More information on the Friends of St. Nicholas will be available in the coming weeks.

Finally, His Eminence Metropolitan Methodios of Boston reported on the successful 44th Clergy Laity held in Boston, July 1-5, 2018. The two Congress chairs, Michael Sophocles and Peter Bassett informed the Council that even though the average cost for each delegate was approximately $700 which was above the registration fee, with aggressive fund-raising the CLC was able to generate a surplus.