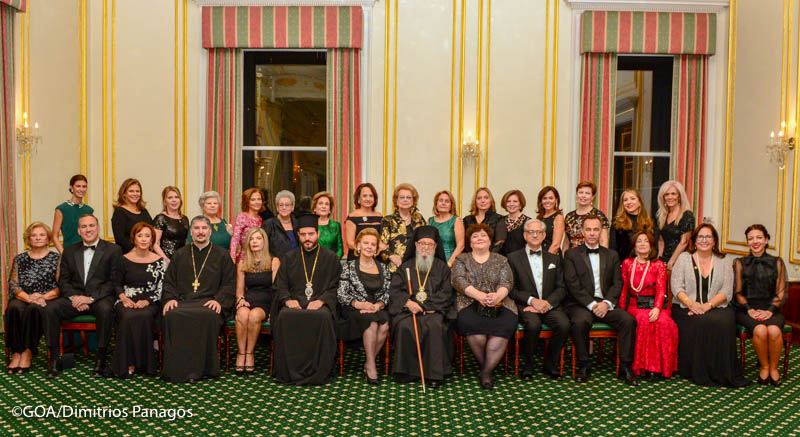 Following the invocation by His Eminence, the evening’s co-chairs Carol Contos and Lillian Johnson welcomed the participants. The Dean of the Cathedral Fr. John Vlahos, in his greeting spoke warmly about Archbishop Demetrios, noting his long service to the Church, his 51 years as a bishop, “the longest service of any bishop in the Orthodox Church.” Fr. John, said that even though the Archbishop is known around the world as a highly respected theologian and scholar, we know him as a pastor, as a leader, a father and a shepherd. “He brought to us the love and the living presence of Christ,” he continued, “and for this pastoral care for the past 19 years we honor you today.”

The President of the Archdiocesan Cathedral Philoptochos Society, Dr. Miranda Kofinas spoke about the contributions of many individuals who make the Annual Chrysanthemum Ball a reality, and thanked in particular Mrs. Mary Jaharis, the honorary chair and Grand Benefactor of the event. She also outlined the many philanthropic causes supported by the Archdiocesan Cathedral Philoptochos, “which is part of the army of women,” a term for the National Philoptochos and all its chapters, she attributed to Archbishop Demetrios. She further said that the Cathedral Philoptochos chose this milestone of the 65th Anniversary of the Chrysanthemum Ball to Honor “our beloved Archbishop… for his extraordinary leadership, pastoral care, scholarly teachings and humanitarian offerings and enlightenment to the citizens of this country.”

George Tsandikos, the vice-president of the Archdiocesan Council introduced Archbishop Demetrios and said the ministry of the Archbishop “demonstrated the healing power of Christ’s truth and compassion, his message was one of unity and genuine relationships.” Tsandikos added that the Archbishop “is as tireless and humble as he is distinguished... and has faithfully led this Church forward for the last 19 years and we thank God for his exemplary leadership and his pastoral love.”

Following the presentation of the honor, His Eminence Archbishop Demetrios offered deep thanks to Mary Jaharis, the Cathedral Philoptochos and many of the people who have dedicated talent and wealth to the work of the Church and philanthropy.  He said “the Philoptochos is an army of twenty-five thousand women who continuously offer love and care to their fellow human beings in need.”

“I am deeply indebted to Philoptochos and I am deeply indebted to the Omogeneia, and I am also proud and boasting in the Lord only because we are blessed by God to have wonderful and loving people.”  The Archbishop said the work of Philoptochos can be traced back even to the first Christian century, as St. Paul in his letter to the Romans (Rom. 16: 1-16) lists a long line of names of women who had dedicated their lives to good deeds. His Eminence went on and said that similarly, the historian of the future will list and account the names of the women of Philoptochos and their contribution to the life of the Greek Orthodox Archdiocese of America and the American society, “because of one very important element they offer, and that is love in Christ.”