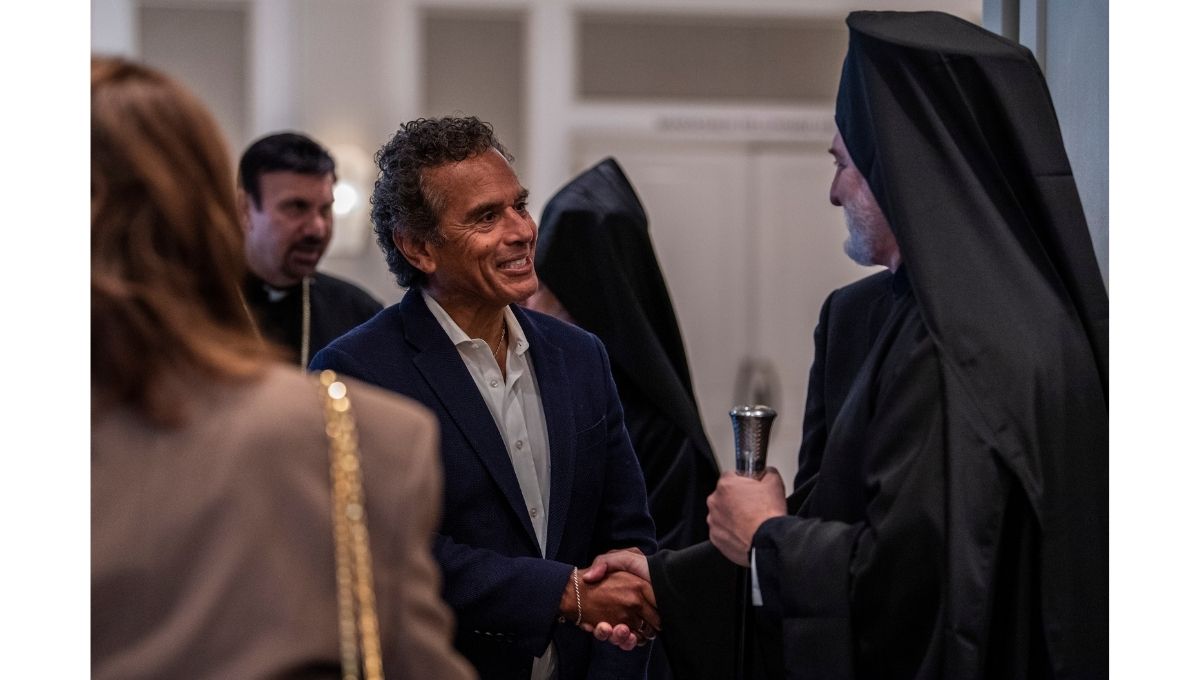 On Monday morning, March 28, His Eminence Archbishop Elpidophoros attended a breakfast with civic, ecumenical, and community leaders at the Cathedral of Saint Sophia in the Byzantine-Latino Quarter of Los Angeles. The Rev. Father John Bakas, Dean of the Cathedral, led a spirited opening before introducing Philoptochos President Dina Demetriou, who represented the organization in presenting the Archbishop with a donation in the amount of $15,000 for the GOARCH Ukraine Relief Fund.

Demetriou, who grew emotional as she spoke, said, “We join with you, [Your Eminence], in making that compassion felt by our Ukrainian brothers and sisters in a very practical way by donating... to your relief fund for Ukraine, stretching our arms out in humanitarian solidarity with Ukrainians through your heart, your generous and fatherly spirit and work. And we thank you for this opportunity to unite with you in this worthy effort.”

In his remarks, the Archbishop applauded the community’s “positive and generous vision of Christianity” and called upon Orthodox faithful to “speak out— rather, shout out, the truth in love. Our voices must become part of the American culture, so that the message of God’s love for all people floods the nation." He continued, "Here in Los Angeles, I feel it.” (Full Remarks)

Also in attendance at the breakfast were His Eminence Archbishop Derderian of the Western Diocese of the Armenian Church and Rt. Rev. Father Alexei Smith, the Ecumenical and Inter-religious Officer of the Roman Catholic Archdiocese of Los Angeles; Consul General of Greece Evgenia Beniatoglou, former Mayor of Los Angeles Antonio Villaraigosa, Sheriff of Los Angeles Alex Villanueva, and Miss Universe 1964 (Representing Greece) Corinna Fields; and leaders of the Saint Sophia community.

The Archbishop later visited the Saint Nicholas Greek Orthodox Church in Northridge, where a lunch was hosted in his honor. His Eminence presented the community with an icon of Saint Nicholas from the Burazeri Monastery of Mount Athos, from which he recently returned after leading the first Centennial pilgrimage in early March. The Presidents of the Parish Council and Philoptochos Society, as well as the Board of the Saint Nicholas Greek School, also each respectively presented the Archbishop with generous donations for the Holy Cross School of Theology on behalf of their organizations. Following the lunch, the Archbishop joined the students of the K-8 Saint Nicholas Greek School—the only all-day Greek parochial school west of Chicago— for their Greek Independence Day celebrations.

His Eminence attended a dinner with the Archons of Southern California later that night.