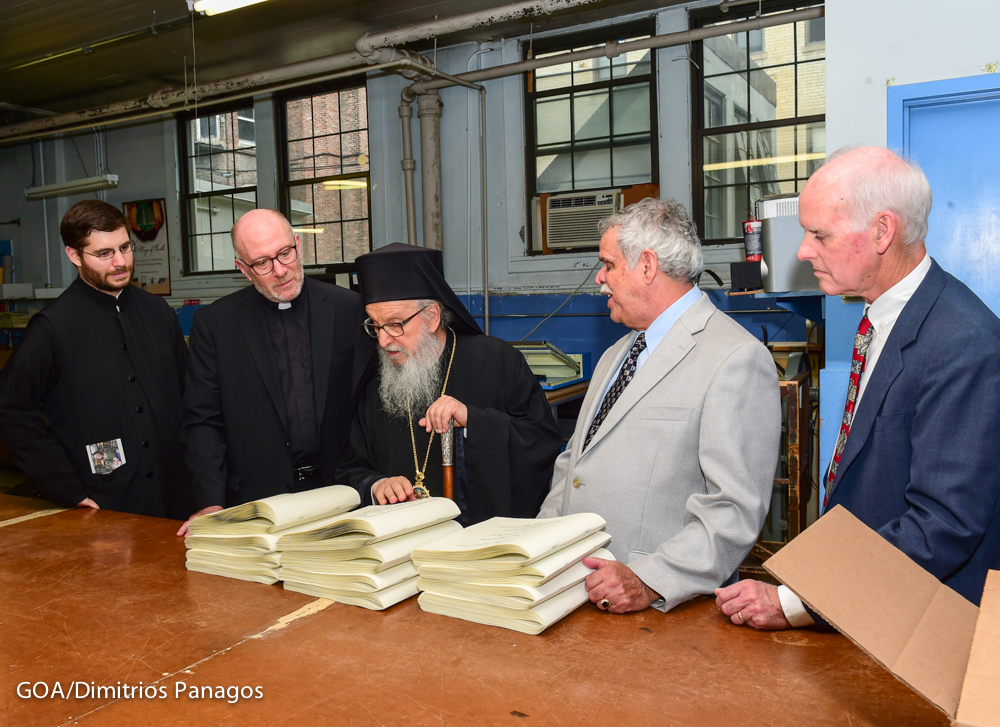 Archbishop Demetrios reviews the first copies of the Divine Liturgy for Orthodox in Braille. Pictured with the Archbishop (to his left) are Mr. Nicholas Racheotes and Mr. Brian MacDonald and (to his right) Rev. Dr. Anton Vrame and Rev. Dn. Eleftherios Constantine

Books are available as of today, October 5, 2017 in the Orthodox Marketplace

BOSTON – His Eminence Archbishop Demetrios visited the National Braille Press on September 14, 2017. During the visit he received the first copies of Speaking to God, My Orthodox Prayer book, and the Divine Liturgy of St. John Chrysostom printed in Braille by the National Braille Press for the Department of Religious Education of the Archdiocese of America. It is believed that these are the first books ever published in Braille for Orthodox Christians.

At the National Braille Press, the Archbishop was greeted by Mr. Nicholas Racheotes, the Chairman of the Press’ Board of Trustees, Brian MacDonald, President, Nicole Noble, Director of Sales, and Whitney Mooney, Sales Associate and Social Media Creative. Mr. Racheotes is an active member of the Taxiarchae Church of Watertown, Mass. He explained about the Braille alphabet to the Archbishop, showing him samples of various publications that the Press creates. The Archbishop toured the facilities and saw how books in Braille are created. He saw the first copies of the three books in Braille. Since the Archbishop is the author of Speaking to God, he autographed copies for Mr. Racheotes and the Braille Press.

Rev. Dr. Anton Vrame, Director of the Department of Religious Education, which worked with the Braille Press to create the three books, noted that these three books were selected because they could assist the blind Orthodox Christian in his or her personal interior spiritual and devotional life.