New York ​– A rare ninth century Greek manuscript of the complete New Testament (Codex 1424) was handed over by the Rev. Dr. James Nieman, President of the Lutheran School of Theology at Chicago (LSTC) to His Eminence Archbishop Demetrios of America during a dignified and well attended ceremony that took place at LSTC’s Augustana Chapel, Tuesday, Nov. 15, 2016. Archbishop Demetrios received the manuscript on behalf of His All-Holiness Ecumenical Patriarch Bartholomew. 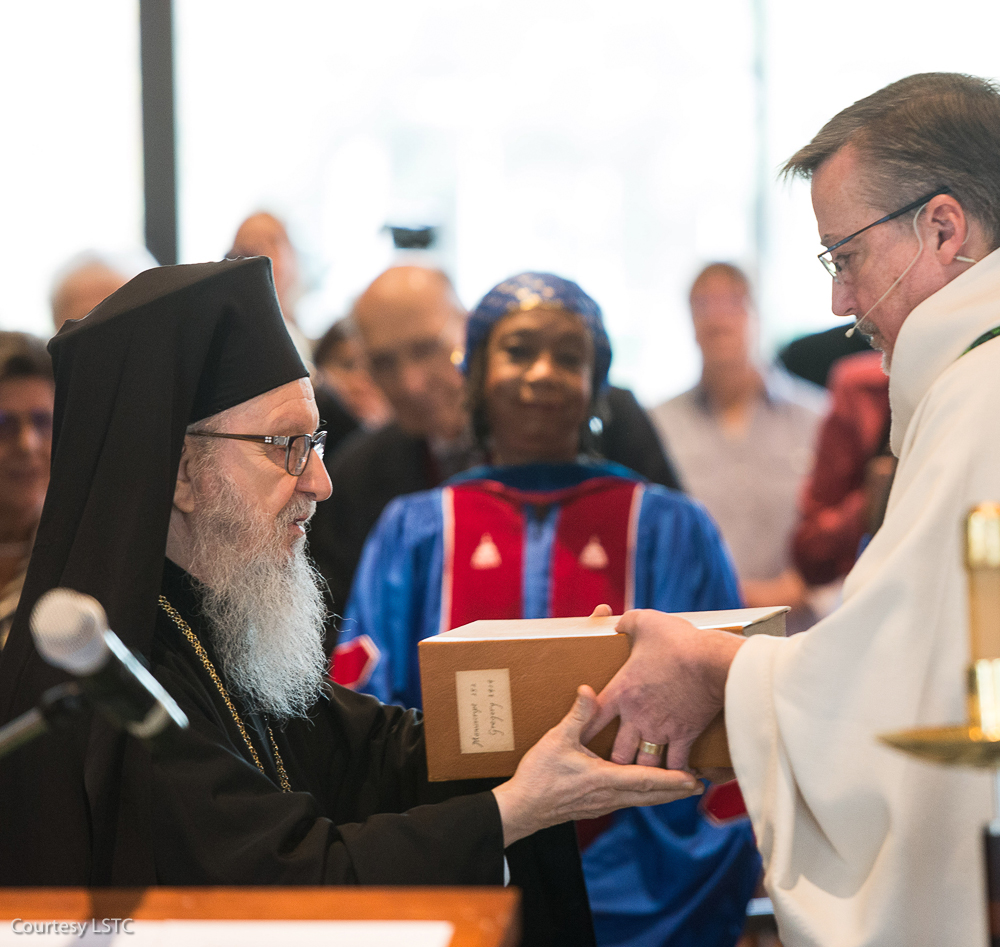 “For the past century, our school has stewarded this book that rightly belongs to your tradition within its original home,” said LSTC President Rev. Dr. James Nieman as he was handing the manuscript to Archbishop Demetrios and continued: “We are thankful for this brief moment it has had in our midst, and now gratefully yet sadly release it for the next part of its journey. May God bless us both through the living word of Christ that it bears, and may God guard you with a safe return and joyful homecoming. In handing this book now to you, let all gathered here know that it passes from our care to yours, ever for God’s glory. Amen.”

Archbishop Demetrios opened the box containing the ancient manuscript of the Holy Gospel and venerated it, just before he took it in his hands.

The manuscript, known among biblical scholars as Codex 1424, was one of many manuscripts stolen in 1917, along with many similar items, from the Monastery of Panagia Eikosifoinissa, in the Paggaion mountain range near the city of Drama, in Greece, following the Balkan Wars of five years earlier. It found its way to a European book dealer and was purchased in 1920 by Levi Franklin Gruber, who later became president of Chicago Lutheran Theological Seminary, one of LSTC’s predecessor schools. Gruber bequeathed the codex to his widow, and the seminary later received his entire rare book collection from her. Earlier this year, the Ecumenical Patriarchate directly and through its representation in the United States, requested the return of the manuscript, to which LSTC voluntarily and readily agreed.

“Today, the return of a full ninth century New Testament text known as Codex 1424 to the Monastery of Eikosifoinissa, located near the city of Drama in Greece constitutes a very significant event,” said Archbishop Demetrios after the conclusion of the ceremony. “It happened through an exchange of correspondence between our Ecumenical Patriarchate and the Lutheran School of Theology at Chicago where this document was kept for almost a century. The codex is an important document for the study of New Testament history and research. Furthermore, the action of the return of this manuscript by LSTC becomes an event enhancing ecumenical relationships. We hope that other places holding items from the same monastery will in a similar manner follow the remarkable action of the aforementioned prominent theological institution,” said the Archbishop emphatically.

The students, the faculty and the trustees of LSTC were all in attendance. Among them, and in addition to President James Nieman, were: ELCA Metropolitan Chicago Synod Bishop Wayne Miller, ELCA Presiding Bishop Elizabeth Eaton, the Rev. Donald McCoid, retired Executive for Ecumenical and Inter-Religious Relations, Rev. Dr. Barbara Rossing, professor of New Testament at LSTC; Rev. Dr. Linda Thomas, professor of theology and anthropology at LSTC; and Ralph Klein, curator of the LSTC Rare Book Collection and Christ Seminary-Seminex Professor Emeritus of Old Testament.

Archbishop Demetrios was accompanied by Rev. Protopresbyter Alexander Karloutsos and Deacon Eleftherios Constantine. Bishop Demetrios of Mokissos, representing Metropolitan Iakovos of Chicago was also in attendance, along with faithful Archons of the Ecumenical Patriarchate, members of the Greek Orthodox Community of Chicago and attorney George Tsougarakis, Archon Dikaiophylax from New Jersey, who assisted the Archdiocese and the Ecumenical Patriarchate in this endeavor.

Early next month, His Eminence Archbishop Demetrios of America will travel to Greece and repatriate this rare manuscript of the New Testament to the Holy Metropolis of Drama and to the Monastery of Panagia Eikosifoinissa.

Photos from the event courtesy of LSTC: https://flic.kr/s/aHskLxgwf7