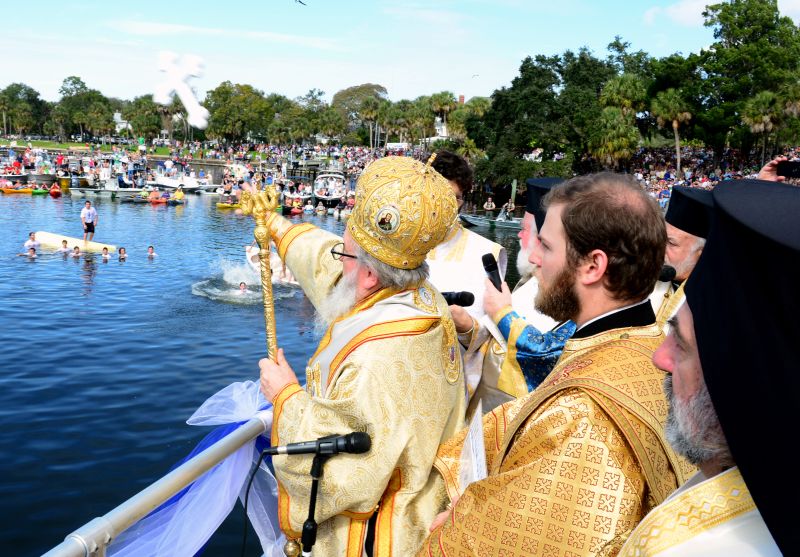 Tarpon Springs, Fla.— Archbishop Demetrios of America celebrated the feast of Holy Epiphany in this city which became internationally known as Epiphany City. He presided over the 107th annual two-day celebrations, the Divine Liturgy, the Service of the Great Blessing of Waters and the ceremony of the tossing of the Cross in Spring Bayou.

On Jan. 6, following the Divine Liturgy and the Agiasmos Service in the Greek Orthodox Cathedral of Saint Nicholas, a procession lead to Spring Bayou. Participating in the services and the celebrations were Metropolitan Alexios of Atlanta, Metropolitan Nikitas of Dardanellia and Bishop Dimitrios of Xanthos. US Congressman Gus Bilirakis was attending the services with his family.

Forty-seven boys, ages 16-18, who had taken positions in dinghies dove for the Cross, and only a short time after Vassilios Harding, 16, raised the white Cross up a high, a clear victor. The formal blessing followed when the divers and Archbishop returned to St. Nicholas Greek Orthodox Cathedral.

A traditional outdoor feast and dancing concluded the day at nearby Craig Park.

For a photo gallery from Epiphany day in Tarpon Springs visit here.