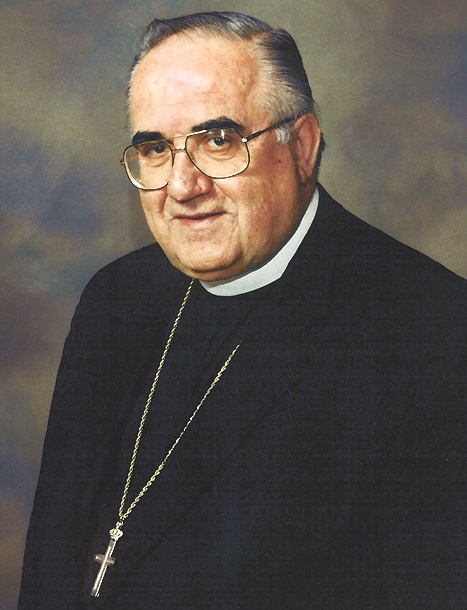 From Daseleon, Greece, arriving in the United States in 1952. Fr. Byron studied at the Holy Cross School of Theology, graduating as valedictorian and was ordained on Oct. 2, 1960. He was appointed to the parish of Sts. Constantine and Helen Church in Chicago and Palos Hills where he faithfully served for 55 years.

For me personally I am very blessed. I worked with Fr. Byron since Aug. 21, 1986 ... except for the three years I was in New Orleans (1992-95), first as his assistant and then upon my return, as his associate. Even though I became pastor when Father retired in June 2006, we continued to work side by side in caring for this beloved parish of Sts. Constantine and Helen. Eternal be his memory!!!

The Chicago Sun Times noted that Fr. Byron Papanikolaou was one of the longest-serving Greek Orthodox priests in the country, at one of the Archdiocese’s biggest U.S. churches.

For 55 years, he guided Sts. Constantine and Helen Church in Palos Hills. When the street outside was renamed Father Byron Way in 2007, the website www.greeknewsonline.com estimated that during his tenure, he presided over 903 weddings, 3,748 baptisms and 1,947 funerals. The biggest estimate was for hospital visits: 65,000. In the days before the HIPAA privacy law, he would go around to different hospitals and look over the patient lists. When he spotted a Papadopoulos, Stamos or Demetriou, he would climb the stairs to their rooms.

“He used to go early in the morning to the hospitals to visit with the patients before the [day shift] nurses were there, 6 in the morning,” said Metropolitan Iakovos, presiding hierarch for the Metropolis of Chicago, which covers Illinois, Iowa, Minnesota, Missouri, Wisconsin and parts of Indiana. “That was near and dear to his heart,” said his son, Aristotle Papanikolaou. “He didn’t wait for the family to call.” Then, “he would often follow up for months, just to make sure people were OK.”

Born in the Macedonian mountains, he was given the name Byron in honor of the Romantic poet. Lord Byron, who became a Greek national hero in the 1820s for funding and training troops in the fight for independence from the Ottoman Empire.

His paternal grandfather was a Greek Orthodox priest, and when he was a little boy, Byron Papanikolaou played with a censer, the vessel for burning incense. In his hometown, people raised goats and sheep, cultivated olives and used donkeys for transport. By village standards, his father was prosperous. He had a general store.

But with World War II and Greece’s occupation by German and Italian forces, “They lost everything,” Aristotle Papanikolaou said. In 1952, young Byron and his parents immigrated to America, settling in Milwaukee. They lived in a hot attic apartment while he finished high school and worked.

In church circles, he met a young woman, Xanthippe, or Cynthia, from the village of Pentalofos, near his hometown. They married on Sept. 11, 1960. A few weeks later, he was ordained.

They moved to Chicago for his assignment at “the first Greek Orthodox church built by Greeks in Chicago,” according to the official history of Sts. Constantine and Helen. The church was located at various spots on the South Side, the last at 74th and Stony Island Avenue, now Mosque Maryam, headquarters of the Nation of Islam. As parishioners moved west, the church followed them to the suburbs in the 1970s.

In 1964, he was named head of the church. He was proud of its school, where he handed out Ion Greek chocolate to the children. “They would run to his office to kiss his hand,” Metropolitan Iakovos said.He coached the kids on learning a Greek word that summarized his outlook on life: “ipomoni.” It means patience and perseverance.

Fr. Papanikolaou acted as a one-man employment agency, food pantry, bank, mechanic and counseling service, according to friends and relatives. If church members lost jobs or were down on their luck, he’d call other parishioners to find them work, apartments, food, free auto repair and help with tuition bills. Through struggles with stomach cancer and Parkinson’s disease, he still came to church every day, sang from the altar and worked in the office.

Funeral services took place Aug. 14 with Archbishop Demetrios presiding and the participation of Metropolitans Iakovos of Chicago, Isaiah of Denver, Methodios of Boston, Bishop Demetrios of Mokissos, Fr. Jonas and 50 other clergy.