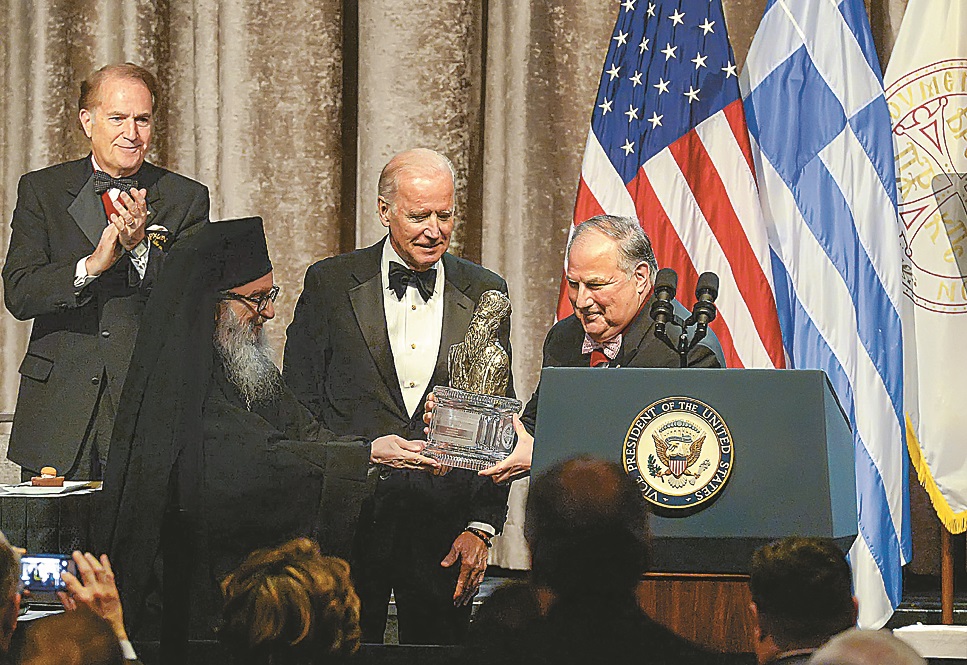 NEW YORK – The Order of St. Andrew bestowed its 2015 Patriarch Athenagoras Humanitarian Award to Vice President Joe Biden on Oct. 17 for his strong support and friendship for the Ecumenical Patriarchate.

The vice president is the 29th recipient of the award, first presented in 1986. He was introduced by Ecumenical Patriarch Bartholomew via a video address to the approximately 700 guests attending the Archons banquet at the Marriott Marquis.

Biden was the first sitting vice president to have an audience with an ecumenical patriarch, visiting His All Holiness Bartholomew on two occasions at the Phanar.

The Vice President also hosted the Ecumenical Patriarch at his home during his 2009 visit to Washington.

Upon receiving the award, Biden stated, “This may be the greatest honor I’ve ever received in my public life,” adding, “It is a double honor to be introduced by the Ecumenical Patriarch.” He addressed the audience for more than 20 minutes, focusing on the importance of religious freedom and the rights of the Ecumenical Patriarchate.

Referring to the Patriarch, Biden said “His All Holiness is one of the most blessed men I’ve ever met in my life. He is a remarkable, gentle man with a backbone of solid steel. He envelopes you with his warmth and spirituality.”

He also praised the spiritual head of Orthodoxy for his work on the protection of the environment and his influence on Pope Francis which led to His Holiness’ encyclical on climate change.

Recalling one of his visits to the Phanar, the Vice President, who is Roman Catholic, spoke of the time spent in Patriarch Bartholomew’s office discussing comparative theology, one of his avocations.

“His All Holiness showed great patience with me,” Biden said. “He furthered my education on the teaching and history of the Church.”

He underscored the importance of faith in people’s lives and of freedom of religion. “Religious values are entirely consistent with civic values,” he said. “Our faith sees us through times of trouble.”

Biden said he has an “absolute commitment to freedom of religion.

“Freedom of religion in America is called the first freedom...the fundamental cherished root of America,” he stated. “No one has the right to confer it or take it away, simply because we are children of God.”

He continued, “I believe so firmly that the Greek Orthodox Church must have the right to control its own destiny, free from interference from any government and I said it in Turkey. The protection of holy sites is imperative.” Biden also said that freedom of religion “must be protected everywhere. “Muslims deserve protection and respect in Greece as well.

“We have to remain vigilant here at home as well and call out anti-Semitism and anti-Muslim rhetoric.”

The Vice President, who is of Irish background, cited the influence of Greek values here and throughout the world. “Millions of Greek immigrants brought Greek values to our shores, enriching what it means to be an American,”

He cited the examples of hierarchs in Greece who protected Jews from the Nazis during World War, and of Archbishop Iakovos “joining hands” with Martin Luther King to further the cause of freedom.

“We’re always able to count on you,” he said.

“As long as America is a beacon for human rights, America will continue to be a light among nations.”

In his response, Archbishop Demetrios praised Vice President Biden for his outreach to the Church and support of the Ecumenical Patriarchate.

“We have a vice president that set a record in visiting and communicating with the Ecumenical Patriarchate,” he stated.

On a personal note, the Archbishop noted that Biden “has been through a tremendous ordeal in the sense of losing a young member of his family,” referring to the death of his son earlier this year.

“Yet he maintains his exemplary faith in God and is a champion for whatever is precious and unique in human life and existence.”