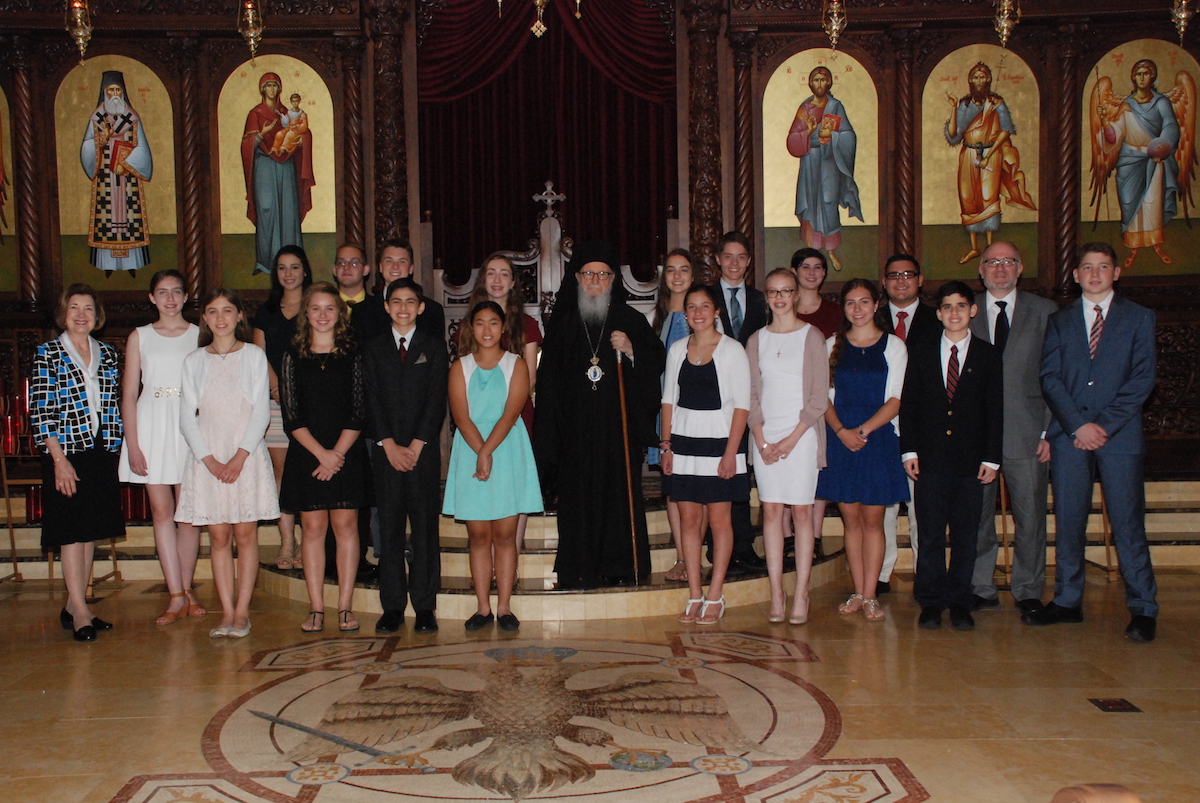 Charlotte, North Carolina: The 2016 Archdiocese St. John Chrysostom Oratorical Festival was an overwhelming success with 223 participating parishes and hundreds of young people learning and speaking about their faith. This year’s Oratorical Festival was held in the Metropolis of Atlanta and was hosted by St. Nektarios Greek Orthodox Church in Charlotte, North Carolina. Planning for the weekend’s festivities began last August and the many months of preparations involved a great number of parishioners who were eager to help wherever needed. Spearheading the host committee was Frank Bilotto, assisted by Evelyn Kund, Elaine Miller and Androniki Kleto.

The eighteen finalists and their families experienced the warm hospitality of the St. Nektarios community over the weekend. The events began on Friday evening with the Encomia service to St. Nektarios, held in the presence of his sacred and miraculous relics displayed on the solea. After a welcome by Rev. Fr. John Wallace, assistant priest at St. Nektarios, everyone was treated to a delicious meal at the parish community center. It was delightful to see how finalists who had participated in previous Oratorical Festivals bonded with the first-time finalists even before the icebreakers began. (His Eminence Metropolitan Alexios of Atlanta was unable to attend because he was on a pilgrimage to Mount Athos, after which he traveled to Istanbul and eventually Crete for the Holy and Great Council.)

Saturday started early with breakfast and orientation sessions for the speakers and judges. His Eminence Archbishop Demetrios gave the invocation, and the Junior Division orators delivered their speeches. The following timely topic was a popular choice in the Junior Division:

In the Old Testament we read that there is "a time to keep silence and a time to speak" (Ecclesiastes 3:7). What is the value of silence and quiet when we are always "plugged in"?

After a short intermission, the spearkers in the Senior Division began. The two most popular topics addressed were:

How do you respond to people who question your belief in God and your participation in the life of the Church?

Human trafficking (i.e., the enslavement of women and children) remains a tragedy even today. We know tht all human beings are created by God in His image (Genesis 1:27). Therefore, how can we as Orthodox Christians help these victims and assist in the efforts to eliminate human trafficking?

An awards luncheon immediately followed the main event, and Rev. Fr. Steve Dalber, Protopresbyter of St. Nektarios, extended his greetings and spoke about the quality of the speeches. He noted that when he heard the first speaker, he thought to himself, “wow, this is the winner.” After the second, third and ensuing speeches, he realized that everyone had a great speech and there was no way he could pick the best one. Rev. Fr. Angelo Artemas, Dean of Holy Trinity Cathedral in Charlotte, served as master of ceremonies for the luncheon and also talked about the importance of the spoken word.

Finally, it was time to present the awards. Presvytera Margaret Orfanakos, Oratorical Festival Chairperson, announced each participant and the rank he or she received. Archbishop Demetrios, assisted by Fr. John Wallace and Rev. Anton C. Vrame, Director of theDepartment of Religious Education, distributed the awards. All finalists received a plaque recognizing their participation and a certificate personally signed by Archbishop Demetrios. Additionally, finalists will receive a monetary award from FAITH: An Endowment for Orthodoxy and Hellenism.

Before the conclusion of the awards luncheon, Archbishop Demetrios shared his thoughts about the speeches and themes raised by this year’s topics. He spoke extensively about the tragedy of human trafficking and Christian persecution, reminding the audience that the twentieth century alone saw more Christians martyred than all centuries prior. He also noted how the arts permeate the Orthodox Church through icons, architecture, vestments and music. If a value could be placed on these, His Eminence said, it would be in the billions of dollars.

On Sunday morning, the Archbishop celebrated Divine Liturgy at St. Nektarios, assisted by three priests and three deacons. At its conclusion, His Eminence invited Eirene Stavropoulos and Christina Hanos to give their winning speeches. Once again everyone was invited to the community center for a farewell luncheon.

The St. John Chrysostom Oratorical Festival remains one of the most inspiring programs of the Greek Orthodox Archdiocese of America.

*First, second and third place finalists were awarded college scholarships in the amounts of $2,000, $1,500 and $1,000, respectively, from the Department of Religious Education's Oratorical Festival Scholarship Fund.

*All students who received an honorable mention were awarded a $500 gift from the Department of Religious Education's Oratorical Festival Scholarship Fund.