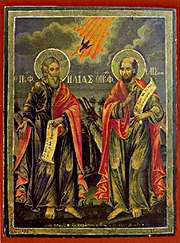 The Prophet Elisseus, the son of Saphat, was from the town of Abel-me-oul and had been a husbandman. In the year 908 B.C., at God's command, the Prophet Elias anointed him to be Prophet in his stead. This happened while Elisseus was plowing his land, having twelve oxen under yoke. Straightway, Elisseus slew the oxen and cooked them, using the wooden plough and the other instruments of husbandry as firewood; then he gave the oxen as food to the people. Bidding farewell to his parents, he followed Elias and served him until the latter was taken up as it were into Heaven (see July 20). When Elisseus received his teacher's mantle and the grace of his prophetic spirit twofold, he demonstrated whose disciple he was through the miracles he wrought and through all that is related of him in the Fourth Book of Kings. He departed full of days and was buried in Samaria, about the year 839 B.C. But even after his death God glorified him; for after the passage of a year, when some Israelites were carrying a dead man for burial and suddenly saw a band of Moabites, they cast the dead man on the grave of the Prophet. No sooner had the dead man touched the Prophet's bones, than he came to life and stood on his feet (IV Kings 13:20-21). Mentioning this, Jesus the Son of Sirach says, "He did wonders in his life, and at his death his works were marvelous" (Ecclus. 48:14). It is because of such marvels that the faithful have reverence for the relics of the Saints (see also Jan. 16). His name means "God is savior."

The content on this page is under copyright and is used by permission. All rights reserved. These works may not be further reproduced, in print or on other websites or in any other form, without the prior written authorization of the copyright holder:
Icon © St. Isaac of Syria Skete
Reading © Holy Transfiguration Monastery - Brookline, MA
Apolytikion © Narthex Press

Share the feast of Elisha the Prophet with an icon greeting ecard.