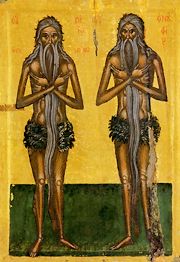 Saint Onuphrius flourished in the fourth century, first in the cenobium near Hermopolis of Thebes in Egypt, and later as a solitary in the desert, where he was discovered by Saint Paphnutius. When Paphnutius first encountered him deep in the desert, he was affrighted at the Saint's appearance, seeing him covered with hair like a wild beast and naked except for a garment sewn of leaves covering his loins. After relating his life and the bitter conflicts he had endured as a hermit, Onuphrius told Paphnutius that he was about to die, and that Paphnutius had been sent to bury him, which soon came to pass. Although Paphnutius desired afterwards to remain in the Saint's cave, as soon as he had buried him, the cave fell in and the palm tree, which had furnished the Saint with dates withered up, indicating that it was the will of God that Paphnutius return to his monastery and make Saint Onuphrius known to all.

Apolytikion of Onuphrius of Egypt

Share the feast of Onouphrios the Great with an icon greeting ecard.