Markella, the Virgin-martyr of Chios 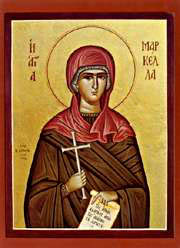 Saint Markella was born in the 14th century on the island of Chios and was the daughter of the mayor of her town. She was raised in the Christian faith by pious parents, but lost her mother at a young age. This was especially difficult for her father who fell into depression. The young Markella was devoted to Christ and strove to preserve her virginity, fighting off numerous temptations from the Devil. Seeing he could make no progress with Markella, the Evil One turned his attention to her father, and enflamed within him an unnatural lust for his daughter.

One day he declared his desire for her at which she ran away in tears and fear. Arriving at the edge of the water and with nowhere to run, a rock opened up for Markella to enter so that her lower half could be enclosed within the rock. When her father arrived in pursuit of her, he was furious to have been deprived of his desire and beheaded his daughter there. The miraculous rock remains on Chios in the church dedicated to Saint Markella the Virgin-Martyr and is said to spring healing waters.

The content on this page is under copyright and is used by permission. All rights reserved. These works may not be further reproduced, in print or on other websites or in any other form, without the prior written authorization of the copyright holder:
Icon © St. Isaac of Syria Skete
Reading © Greek Orthodox Archdiocese of America
Apolytikion © Fr. Seraphim Dedes

Share the feast of Markella, the Virgin-martyr of Chios with an icon greeting ecard.