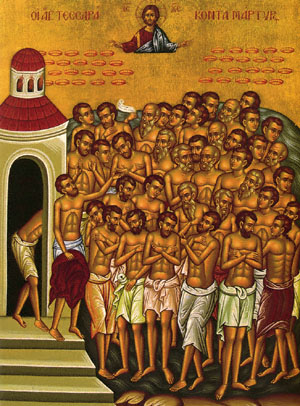 These holy Martyrs, who came from various lands, were all soldiers under the same general. Taken into custody for their faith in Christ, and at first interrogated by cruel means, they were then stripped of their clothing and cast onto the frozen lake which is at Sebastia of Pontus, at a time when the harsh and freezing weather was at its worst. They endured the whole night naked in such circumstances, encouraging one another to be patient until the end. He that guarded them, named Aglaius, who was commanded to receive any of them that might deny Christ, had a vision in which he saw heavenly powers distributing crowns to all of the Martyrs, except one, who soon after abandoned the contest. Seeing this, Aglaius professed himself a Christian and joined the Martyrs on the lake, and the number of forty remained complete. In the morning, when they were almost dead from the cold, they were cast into fire, after which their remains were thrown into the river. Thus they finished the good course of martyrdom in 320, during the reign of Licinius. These are their names: Acacius, Aetius, Aglaius, Alexander, Angus, Athanasius, Candidus, Chudion, Claudius, Cyril, Cyrion, Dometian, Domnus, Ecdicius, Elias, Eunoicus, Eutyches, Eutychius, Flavius, Gaius, Gorgonius, Helianus, Heraclius, Hesychius, John, Lysimachus, Meliton, Nicholas, Philoctemon, Priscus, Sacerdon, Severian, Sisinius, Smaragdus, Theodulus, Theophilus, Valens, Valerius, Vivianus, and Xanthias.

Apolytikion of 40 Martyrs of Sebastia

Be entreated, O Lord, by the sufferings endured for You by the Saints, and we pray You, heal all our pain.

Kontakion of 40 Martyrs of Sebastia

O Forty Champions of the Lord, you abandoned the armies of the world and attached yourselves to the Master in heaven. Having gone through fire and water, O Blessed Ones, you worthily won glory from heaven and a multitude of crowns.

Share the feast of 40 Martyrs at Lake Sebaste with an icon greeting ecard.