Luke the Righteous of Greece 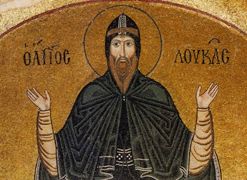 Saint Luke was the descendant of a family from Aegina which, because of the frequent invasions of the Saracens, left Aegina and dwelt in Phocis, where the Saint was born in 896. From his earliest childhood Luke ate neither flesh, nor cheese, nor eggs, but gave himself over with his whole soul to hardship and fasting for the love of heavenly blessings, often giving away his clothing to the poor, for which his father punished him. After his father's death he secretly left home to become a monk, but the Lord, inclining to the fervent prayers of his mother, made him known, and he returned to her for a time to care for her. For many years he lived as a hermit, moving from place to place; he spent the last part of his life on Mount Stirion at Phocis, where there is a city named Stiris. The grace of God that was in him made him a wonder-worker, and his tomb in the monastery of Hosios Loukas, famous for its mosaics, became a source of healings and place of pilgrimage for the faithful. According to some he reposed in the year 946; according to others, in 953.

Apolytikion of Luke the Righteous

Kontakion of Luke the Righteous

God, Who by judgments known to Him chose thee ere thou wast formed that thou, O Luke, mightest be right well-pleasing unto Him, from the womb made thee His own and He sanctified thee; as His own true faithful servant hath He shown thee forth and hath set aright thy footsteps, ever guiding thee as the Friend of man; thou rejoicest before Him now.

Share the feast of Luke the Righteous of Greece with an icon greeting ecard.