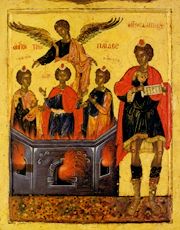 The Prophet Daniel and the Three Children were all descended from the royal tribe of Judah. In the year 599 before Christ, in the reign of Joachim, who was also called Jechonias (I Chron. 3:16, and II Chron. 36:8), while yet children, these righteous ones were led away as captives into Babylon together with the other Jews by Nabuchodonosor. He singled them out from among the other captives to serve him, and renamed them thus: Daniel was named Baltazar; Ananias, Sedrach: Misail, Misach; and Azarias, Abednago. They were reared in the royal court, and taught the wisdom of the Chaldeans; and after the passage of three years, they surpassed all the Chaldean sages (Dan. 1).

Thereafter, Daniel, being still a lad, interpreted that mysterious image seen by Nabuchodonosor in a dream, an image that was composed of different metals, but was shattered and ground to dust by a certain stone which had been hewn out of a mountain without the hand of man. This vision clearly portrayed through the mountain the height of the Virgin's holiness and the power of the Holy Spirit which overshadowed her. Through the image of the Stone, Christ was portrayed, Who was seedlessly born of her, and Who by His coming as the Godman would shatter and destroy all the kingdoms of the world, which were portrayed through the image; and He would raise them that believe in Him into His Heavenly Kingdom, which is eternal and everlasting (ibid. 2:31-45). Thereupon, he signified in prophecy the time of His appearance in the Jordan, the beginning of His preaching of the Gospel, the time of His saving Passion, and the cessation of the worship according to the Mosaic Law, (ibid. 9:14-27). He portrayed most excellently the majestic and dread image of His second coming, presenting by means of words, as with living colours, the fiery throne which shall be set, the Eternal Judge Who shall sit thereon, the river of fire that shall flow forth before Him, the calling to account before the impartial judgment seat, the opened books of each ones deeds, the thousands upon thousands of them that minister to Him, and the ten thousands of them that stand in His presence (ibid. 7: 9-10). Daniel (whose name means "God is judge") was called "man of desires" by the Angels that appeared (ibid. 9:23), because he courageously disdained every desire of the body, even the very bread that is necessary for nourishment. Furthermore, he received this name because, in his longing for the freedom of those of his tribe, and his desire to know their future condition, he ceased not supplicating God, fasting and bending the knee three times a day. Because of this prayer he was cast into the den of lions, after he had been accused by his enemies as a transgressor of the decree issued through the proclamation of the king, that no one should worship or ask for anything from God or from men for thirty days, but only from the king. But having stopped the mouths of the lions by divine might, and appearing among them as though he were a shepherd of sheep, Daniel showed the impious the might of godliness (ibid. 6:1-23).

As for the Three Children, Ananias ("Yah is gracious"), Misail ("Who is what God is?), and Azarias ("Yah is keeper"), since they refused to offer adoration to Nabuchodonosor's image, they were cast into the furnace of fire. They were preserved unharmed amidst the flames - even their hair was untouched - by the descent of the Angel of the Lord, that is, the Son of God. Walking about in the furnace, as though in the midst of dew, they sang the universal hymn of praise to God, which is found in the Seventh and Eighth Odes of the Holy Psalter. And coming forth therefrom, without even the smell of the fire on their clothes (Dan. 3), they prefigured in themselves the Virgin's incorrupt giving of birth; for she, on receiving the Fire of the Godhead within her womb, was not burned, but remained virgin, even as she was before giving birth.

Therefore the Church celebrates the Three Children and Daniel on this day, on the Sunday of the Forefathers, and on the Sunday before the Nativity of Christ, since they prefigured and proclaimed His Incarnation. Furthermore, they were of the tribe of Judah, wherefrom, Christ sprang forth according to the flesh. The holy Three Children completed their lives full of days; as for the Prophet Daniel, he lived until the reign of Cyrus, King of Persia, whom he also petitioned that his nation be allowed to return to Jerusalem and that the Temple be raised up again, and his request was granted. He reposed in Peace, having lived about eighty-eight years. His prophetical book, which is divided into twelve chapters, is ranked fourth among the greater Prophets.

Apolytikion of Prophet Daniel and the Three Holy Youths

Great are the accomplishments of faith. In the fountain of flame the three Holy Youths rejoiced as though they were resting by the waters. And the Prophet Daniel showed himself to be a shepherd to the lions, as though they were sheep. Through their prayers O Christ our God, save our souls.

Kontakion of Prophet Daniel and the Three Holy Youths

Since thy pure and hallowed heart had been made pure by the Spirit, it became His dwelling-place and clearest prophecy's vessel; for thou didst behold things far off as near and present, and when cast into the den, thou didst muzzle lions; for which cause, O blessed Prophet, glorious Daniel, we all revere thee in faith.

Share the feast of Daniel the Prophet & Ananias, Azarias, & Misail, the Three Holy Youths with an icon greeting ecard.