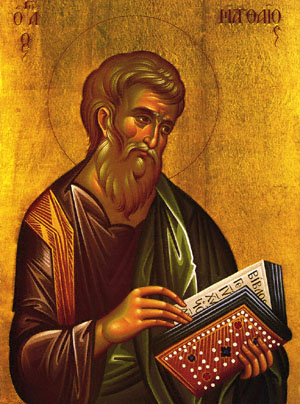 This Apostle, who was also called Levi, was the son of Alphaeus and had Galilee as his homeland. A publican before being called by Christ, he became one of the Twelve Apostles, and an Evangelist. While still in Palestine, he wrote his Gospel first in Hebrew, being also the first of all to write the Gospel. When he is depicted in icons, there is portrayed next to him the likeness of a man, one of the symbolic living creatures mentioned by Ezekiel (1.10), which, as Saint Irenaeus writes, is a symbol of our Saviour's Incarnation.

Apolytikion of Apostle and Evangelist Matthew

O Holy Apostle and Evangelist Matthew, intercede to our merciful God, that He may grant our souls forgiveness of sins.

Kontakion of Apostle and Evangelist Matthew

When thou didst cast away the publican's balance and wast united to the yoke of uprightness, then didst thou prove a merchant of great excellence, one that gathered in the wealth of the wisdom of Heaven; for this cause, the word of truth thou didst herald, O Matthew, and didst arouse the souls of sluggish men by signifying the dread day of reckoning.

Share the feast of Matthew the Apostle & Evangelist with an icon greeting ecard.