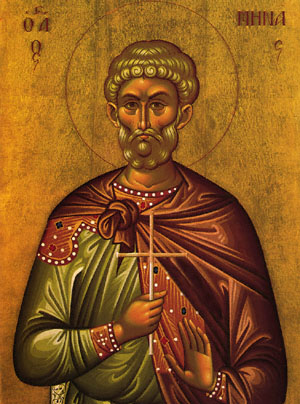 Saint Menas, who had Egypt as his fatherland, contested in Cotyaeion of Phrygia in 296 during the reign of Diocletian and Maximian. A soldier distinguished for his valour in war, he renounced his rank and withdrew to devote himself to ascetical struggles and prayer in the mountains. Filled with zeal and more than human courage, he presented himself in the midst of a pagan festival in Cotyaeion and declared himself to be a Christian. After terrible torments which he endured with astonishing courage, he was beheaded. His martyrium in Egypt became a place of universal pilgrimage; evidence of ancient journeys to his shrine have been found as far away as Ireland. The glory and refuge of the Christians of Egypt, he has been revealed to be a worker of great miracles and a swift defender for all who call on him with faith; besides all else, he is also invoked for help in finding lost objects.

Thy Martyrs, O Lord, in their courageous contest for Thee received as the prize the crowns of incorruption and life from Thee, our immortal God. For since they possessed Thy strength, they cast down the tyrants and wholly destroyed the demons' strengthless presumption. O Christ God, by their prayers, save our souls, since Thou art merciful.

As godly-minded athletes and Martyrs who strove for piety, the Church doth honour and glorify this day the godly contests and travails of Menas the prizewinner, noble Victor, brave Vincent, and valiant Stephanie, and lovingly doth cry out and glorify Christ, the Friend of man.

Share the feast of Menas of Egypt with an icon greeting ecard.