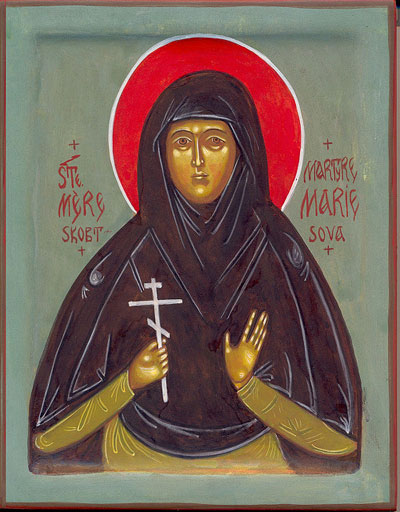 Saint Maria Skobtsova of Paris lived a life devoted to serving the poor and the marginalized. She was born Elizaveta Pilenko in 1891 in Riga, Latvia to devout Russian Orthodox parents. Her father died when she was fourteen, and her grief led her to atheism. As a young teenager she became involved in the socialist and intellectual circles in St. Petersburg. By eighteen she was a published poet and married to a Bolshevik. Her desire to actively serve the needy - more than simply discuss social change - led her back to a faith in Christ. She then became the first woman accepted to study at the Theological Academy of the Alexander Nevsky Monastery in St. Petersburg.

After the Bolshevik Revolution, she was elected Mayor of Anapa but had to flee Russia for Paris in 1923. Elizaveta was inspired to devote her life completely to serving the poor after her daughter, Nastia, died of meningitis in 1926. After her second marriage ended in 1932, Metropolitan Evlogii of Paris tonsured her a nun with the name Maria and blessed her to live a "monasticism in the world" devoted to social service.

Initially devoted to the Russian emigres in Paris, she founded a sanatorium along with homes to serve single mothers, families, and single men. By 1937, 120 dinners were served each day. Much of the work she did herself: begging for food, cooking the soup, and even embroidering the icons for their chapel.

By 1942, Maria's work turned to assisting the Jewish population. She helped Father Dimitri Klepinin issue fake baptismal certificates for Jews that came to their aide. In a mass arrest in July of that year, 12,884 Jews were taken to a sports stadium before being transferred to Auschwitz. Maria spent three days visiting the prisoners, bringing them food, and even rescuing some of the children by smuggling them out in trash cans. She also aided Jews in escaping to Southern France which was unoccupied by the Nazis.

Maria was arrested in February, 1943, and was sent to Ravensbruck concentration camp in Germany. For two years, she raised the spirits of her fellow prisoners, helping them remember their human dignity. She led discussion groups on literature, history, and theology, despite her weakening health. On March 31, 1945, a short time before the camp was rescued, Saint Maria was taken to the gas chambers; some prisoners say she took the place of a fellow Jewish prisoner.

On January 18th, 2004, the Holy Synod of the Ecumenical Patriarchate recognized Mother Maria Skobtsova as a saint along with her three fellow workers who also died in German concentration camps: her son Yuri, Fr. Dimitri Klepinin, and Ilya Fondaminsky. They are all commemorated in the Orthodox Church on July 20th.

The content on this page is under copyright and is used by permission. All rights reserved. These works may not be further reproduced, in print or on other websites or in any other form, without the prior written authorization of the copyright holder:
Icon © Jim and Nancy Forest
Reading © Greek Orthodox Archdiocese of America

Share the feast of Mother Maria Skobtsova, New-Martyr of France with an icon greeting ecard.