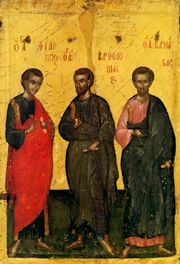 Saint Barnabas, one of the Seventy, was from Cyprus, of the tribe of Levi, and a fellow disciple with Paul under Gamaliel. He was called Joses, but was renamed Barnabas, which means "son of consolation," perhaps to distinguish him from the Joses called Barsabas and surnamed Justus (Acts 1:23). Saint Barnabas had a field, which he sold and brought the money to the Apostles (Acts 4:36-37). Before the conversion of Saul to Paul, it was Barnabas who was the leader of the Seventy Apostles, the first in preaching and chief spokesman. After Saul's vision on the road to Damascus, it was Barnabas who joined him to the Apostles when the others, because of Saul's reputation as a persecutor of the Church, still feared him (Acts 9:26-27); again it was Saint Barnabas who conscripted Paul as a preacher, bringing him from Tarsus to Antioch after the stoning of Stephen, to assist in spreading the Gospel (Acts 11:25-26). Saint Barnabas preached the Gospel in many places, traveled together with Paul, and finally was stoned to death by the Jews in his native Cyprus. During the reign of Zeno, in the year 478, his sacred relics were found, having on his chest the Gospel according to Matthew written in Greek by Barnabas' own hand. This Gospel was brought to Zeno. Because of this the Church of Cyprus received the right of autonomy, and its archbishop was given the privilege, like the emperor, of signing his decrees and encyclicals in vermilion.

To thy Lord, O Barnabas, thou wast a genuine servant; and among the Seventy Apostles, thou wast the foremost; and with Paul, thou shonest brightly in thy wise preaching, making known unto all men Christ Jesus, the Saviour. For this cause, we celebrate thy divine memorial with hymns and spiritual songs.

Share the feast of Barnabas the Holy Apostle with an icon greeting ecard.