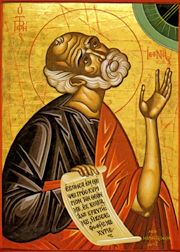 The Prophet Jonah, the son of Amathi, of the town of Geth-hopher (IV Kings 14:25), was of the tribe of Zabulon; he prophesied during the years 838-810 before Christ. God commanded him to go to Nineveh, the great city of the Assyrians, and to proclaim that its destruction was nigh at hand because of the sins of its people. But he, as a Prophet who knew the great compassion of God, feared that at his preaching the Ninevites would repent; that God, accepting their repentance in His love for man, would not fulfill Jonah' threats; and that he would be branded a false prophet. So he disobeyed the divine command, and boarded a ship and departed elsewhere. Yet, the sudden and fearful sea-storm and the revelation of Jonah' disbedience caused the sailors to cast him into the sea. A great sea-monster appeared straightway by divine providence, and swallowed him up. For three days and nights he was found in its belly and he prayed, saying the words, "I cried aloud in my affliction unto the Lord my God..." (Jonah 2:3, the Sixth ode of the Holy Psalter). The sea-monster then vomited him up on dry land and he again heard God's command. Wherefore, he went and preached, saying, "In three days, Nineveh shall be destroyed." The people became terrified and all repented. The great, the small, babes at the breast, and even the irrational beasts themselves fasted, and thus, having found mercy from God, they were spared His wrath. Jonah' book of prophecy is divided into four chapters, and is placed fifth in order among the twelve minor Prophets. His three-day sojourn in the sea-monster's belly is an image of our Saviour's three-day burial and His life-bringing Resurrection (Matt. 12:39-40). His name means "dove."

To the Ninevites, thou wast a trumpet, blaring fearful threats of Heaven's judgments, at the which they repented with all their hearts; and from the sea-monster's belly didst thou foreshow the Lord's divine Resurrection to all the world. Hence, entreat Him to bring out of corruption all of us, who honour thee, O Jonah, as a friend of God.

Thou didst pass three days and nights within the sea-monster's entrails, showing forth the Lord's descent into the belly of Hades; for when He had freely suffered His saving Passion, He arose out of the sepulchre on the third day. Hence, we honour thee, O Prophet, who wast deemed worthy to be a figure of Christ.

Share the feast of Jonah the Prophet with an icon greeting ecard.