Deposition of the Precious Robe of the Theotokos in Vlachernae 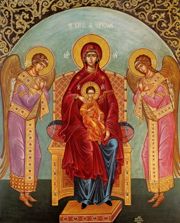 During the reign of Leo the Great (457-474) two patricians and brethren on a pilgrimage to the Holy Land lodged with an old widow, a Christian of Jewish descent. Seeing the many miracles wrought at a small shrine in her house, they pressed her until she revealed to them that she had raiment of the most holy Theotokos kept in a small coffer. Our Lady had had two virgins in her lifetime who attended upon her; before her holy dormition, she gave each of them one of her divine garments as a blessing. This old widow was of the family of one of those two virgins, and it had come through the generations into her hands. With the permission of God, that this holy relic might be had for the profit of many, the two men took the garment by stealth and brought it to Blachernae near Constantinople, and building a church in honor of the Apostles Peter and Mark, they secretly enshrined the garment therein. But here again, because of the multitude of miracles that were worked, it became known to the Emperor Leo, and a magnificent church was built, as some say, by that same Leo, but according to others, by his predecessors Marcian and Pulcheria, and enlarged by Leo when the holy raiment was found. The Emperor Justin the Younger completed the church, which the Emperor Romanus IV Diogenes raised up immediately again after it had burned in 1070. It burned again in 1434, and from that time it remained a small house of prayer together with the renowned holy spring. After the seventh century, the name Blachernae was given to other churches and monasteries by their pious founders out of reverence for this famous church in Constantinople. In this church John Catacuzene was crowned in 1345; also, the Council against Acindynus, the follower of Barlaam, was convoked here (see the Second Sunday of the Great Fast).

Apolytikion of Robe of the Theotokos

O Ever-Virgin Theotokos, shelter of mankind, thou hast bestowed upon thy people a mighty investure, even thine immaculate body's raiment and sash, which by thy seedless childbirth have remained incorrupt; for in thee nature and time are made new. Wherefore, we implore thee to grant peace to the world, and great mercy to our souls.

Kontakion of Robe of the Theotokos

O godly shelter that dost cover all mankind, the sacred robe that covered thy sacred body hast thou bestowed on all the faithful graciously, O pure Virgin, as a robe of divine incorruption. As we celebrate with love its august deposition, we cry to thee with fear, O graced of God: Rejoice, O modest one, boast of the Christian race.

Share the feast of Deposition of the Precious Robe of the Theotokos in Vlachernae with an icon greeting ecard.